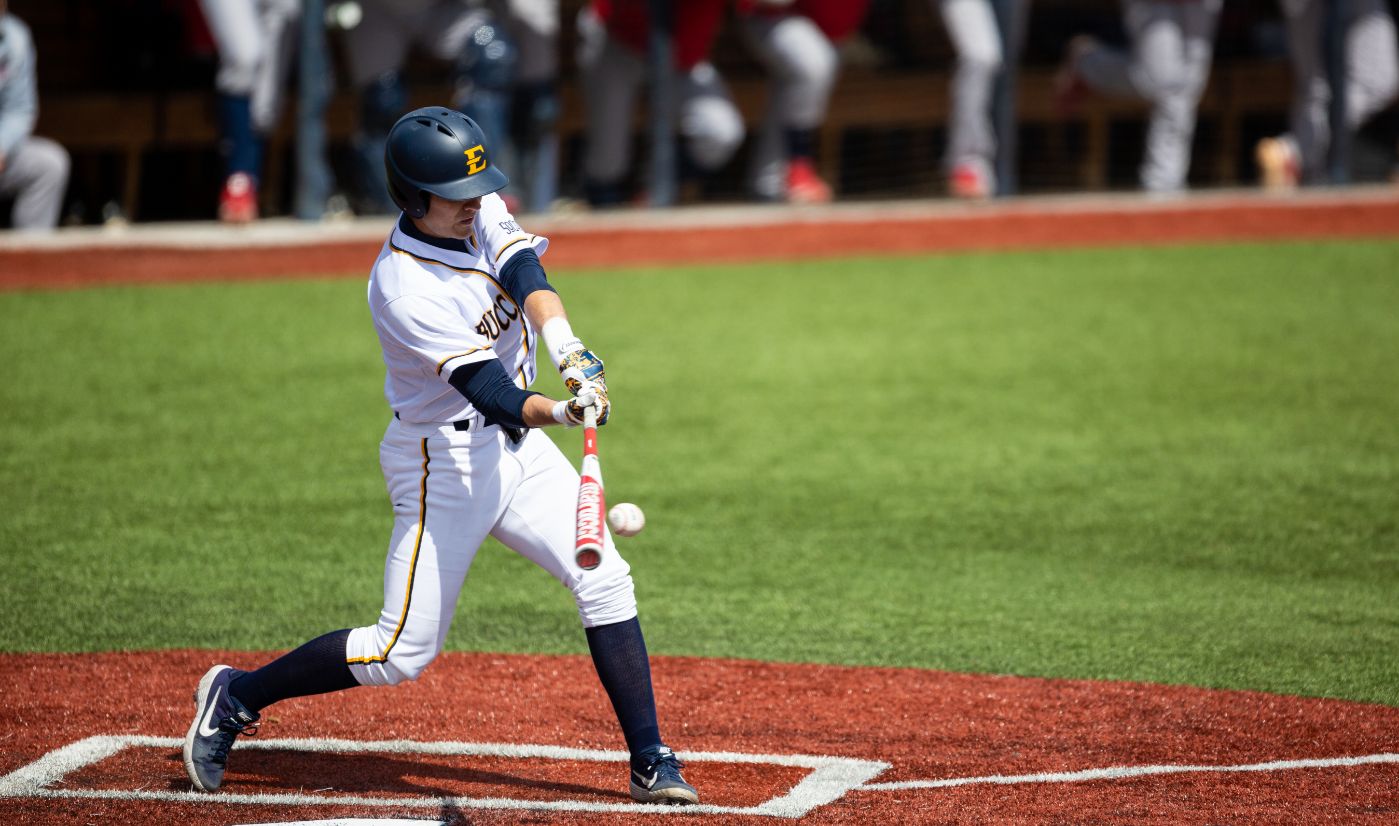 JOHNSON CITY, Tenn. (March 1, 2020) — The first doubleheader of the 2020 season for ETSU Baseball was one to remember for those at Thomas Stadium as the Bucs set a program record with seven home runs in game one in a 18-7 victory over the Georgia State Panthers. ETSU followed the powerful win with a walk-off win in game two to sweep the three-game series over the visitors.

GAME ONE: ETSU 18, GSU 7
Like they did in the series opener, Georgia State got on the board first scoring three runs in the teams’ opening at bat on four hits and an error. After that, it didn’t take long for the Bucs’ bats to come alive.

Freshman second baseman Ashton King (Knoxville, Tenn.) gave ETSU its first tally in the second as he knocked his first career home run. The Bucs took their first lead of the contest in the third as Jake Lyle (Spring Hill, Tenn.), Jackson Greer (Knoxville, Tenn.) and Ben Jackson (Guyton, Ga.) started the inning with back-to-back-to-back shots, all to left field. The big inning continued for the Blue and Gold as King delivered a 2-RBI double. Jake Madole (Hampstead, N.C.) capped off the six-run third with a solo shot to left, the fourth home run in the inning.

ETSU came through with two more runs in the fifth as King and Madole went back-to-back to extend the Bucs’ lead to six. The Panthers picked up another two runs in the seventh, but the Bucs electrified the crowd with nine runs in the bottom half of the frame. The Bucs got their first run of the inning on a wild pitch, but after a walk, Ethan Cady (Soddy Daisy, Tenn.) delivered a 3-RBI double off the left field wall. In the next at-bat, Cady scored as King delivered another big hit, a triple to right center.

In his second plate appearance of the day JL Bland (Memphis, Tenn.) knocked his first career Buccaneer triple to score Markell Graham (Atlanta, Ga.) from first. Bland scored on a passed ball to cap off the nine-run inning.

Stat of the game
The Bucs set a program record with seven home runs in the game. King and Madole both had two while Lyle, Greer and Jackson each had a homer in the contest.

Notables
» The seven homers tied a Division I season high coming into this weekend. Texas Tech had seven on Feb. 15 against Houston Baptist. It is the most by a SoCon team since Furman had seven against Gardner-Webb on May 3, 2017.
» The Bucs tied a program record with four triples in the contest.
» King finished a triple shy of the cycle with two homers, a triple and a double in his 4-for-4 day with 5 RBIs. He became the first Buc to have four hits this season and the first to have 5 RBI since Hill did it on March 24, 2019.
» It is the first time since Feb. 24, 2019 the squad hit back-to-back jacks and the first time since March 16 of last season, they hit four or more home runs in a contest.
» The 18 hits for ETSU are the most for the Bucs since May 26, 2017 when they had 19 against VMI. The 18 runs are the most for ETSU since they defeated Gardner-Webb 19-9 on March 10, 2017.
» Colby Stuart (Elon, N.C.) started on the mound for the Bucs and got the first win of the season going five innings on the rubber and allowing three runs, six hits, three walks and struck out three.
» Matthew Bollenbacher (Powder Springs, Ga.) pitched three innings of relief and closed out the game, logging his first save of 2020.
» Lyle, Hill and Jackson all extended their on-base streak to ten games.

GAME TWO: ETSU 5, GSU 4 (10)
Both squads continued the offensive power from game one in the first inning as GSU’s Merejo and ETSU’s Greer both launched solo shots to left as the two teams were tied at one through the first. The two teams both got another run in the fourth as the Panthers delivered an RBI single and Beam came through with an RBI double to left to tie the game.

In the fifth, both teams plated more, but it was ETSU who took the lead with a Lyle double, scoring Madole and King as the Bucs took a 4-3 lead into the sixth. GSU tied the game in the sixth scoring on a wild pitch.

The two teams entered the ninth tied at four, but both relief pitchers worked their way through the lineup to send the game into extra innings.

In the tenth, Georgia State logged a two-out triple to put the leading run just 90 feet away, but a grounder to the left side of the infield gave the Bucs an opportunity to get the win with just a single run. Hill did his job as the leadoff man starting off the inning with a triple down the right field line to set the Bucs up for the win. Lyle, who came into the game with a .500 batting average, delivered with a base hit up the middle to give the Bucs the series sweep.

Stat of the game
The Bucs captured their second walk-off win of the season. They just had one walk-off win last season.

Notables
» Lyle went 2-for-5 in the contest and had his fourth multi-RBI game of the season. It is his first 3-RBI game of his career.
» Lyle, Hill and Jackson have all reached base in every game this season.
» Last season, the Bucs and the Panthers faced off in a doubleheader and Georgia State sent the Bucs home from Georgia in walk off fashion.
» The Bucs hit five triples over the course of the weekend. They entered the series with two.
» Zach Kirby’s (Upland, Calif.) seven strikeouts are a career high for the sophomore starter.
» Matthew Mercer (Chattanooga, Tenn.) got the win in relief and delivered 2.2 shutout innings striking out three and allowing three hits.
» For the second consecutive season the Bucs are off to a hot 9-2 start.

Up next
The Blue and Gold are back at Thomas Stadium as they host the ETSU Baseball Tournament presented by Courtyard by Marriott Johnson City as they will face Wagner, Marist and Ohio next weekend beginning on Friday, March 6.