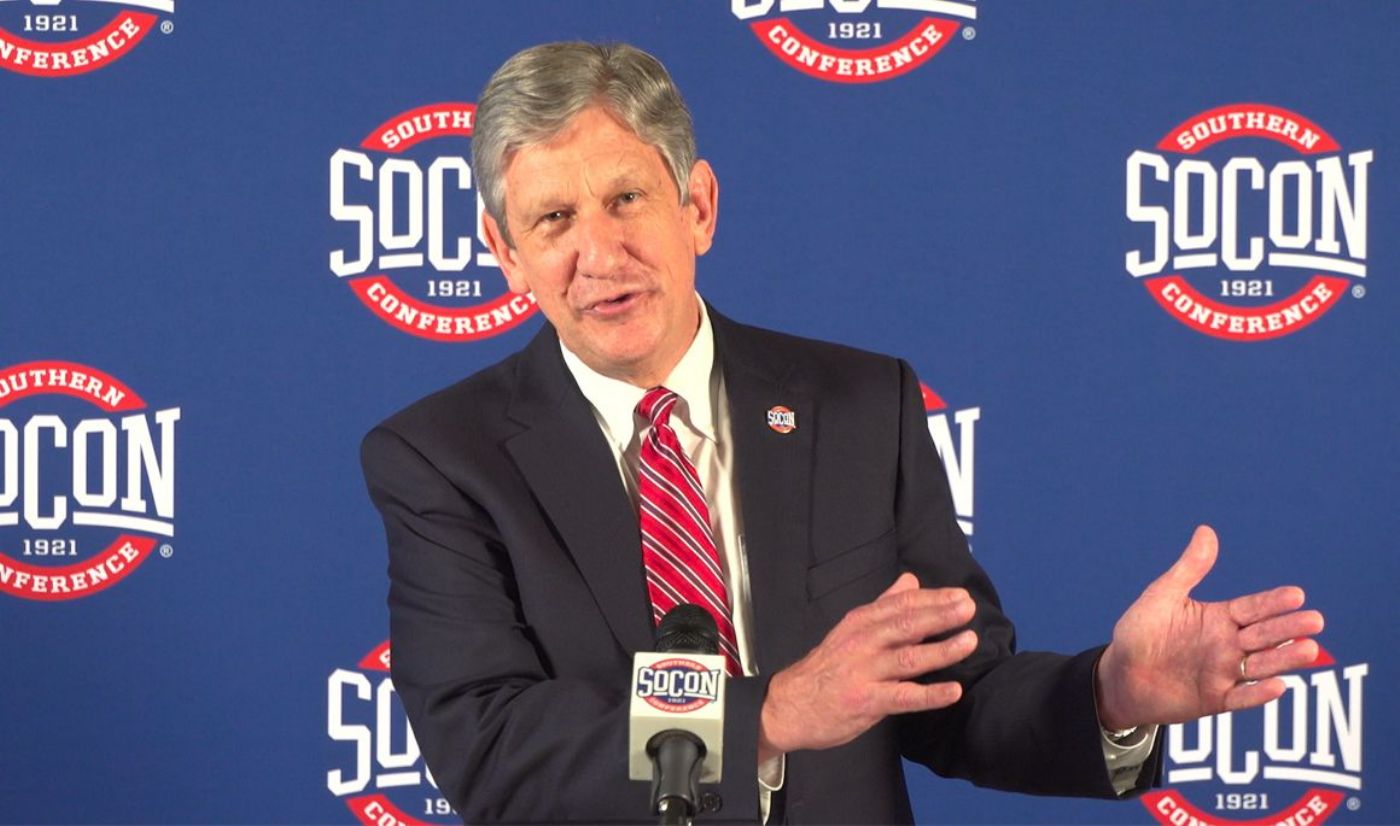 Schaus, who is wrapping up his first year as the league’s ninth commissioner, touched on several topics, touting the SoCon’s athletic and academic successes in 2019-20; discussing the league’s upcoming 100th anniversary, introduction of a new strategic plan, and recent cost-cutting measures necessitated by COVID-19; recognizing the work done on league campuses to foster academic growth and mental health; and addressing on-going NCAA legislation.

The commissioner went on to recognize the achievements of the league’s spring sport programs, all of which saw the premature cessation of their seasons due to the coronavirus.

“As a commissioner, it was heart-breaking,” he said. “I know how much this meant to the student-athletes and coaches and people that follow each of those sports. But the bottom line is that those were the right decisions, because the health and welfare and safety of those student-athletes and all involved has to always be paramount.”

In addition to forcing the cancelation of winter championships and spring sports and leaving future timelines uncertain, the coronavirus pandemic has had a monumental financial impact across college athletics as it has the world at large. As such, the league recently announced several cost-cutting measures for the coming year, including bringing fewer teams to some SoCon championships.

“The COVID-19 pandemic had a big impact on what we did with the second half of our year,” Schaus said. “It canceled our championships, it affected things on our campuses and shut them down, it affected our society in so many ways. But I’ll tell you things that I’m so impressed with is, is that it didn’t change our drive, it didn’t change our vision. Our schools kept together and communicated so well during this process.”

Schaus recognized several of the league’s 33 All-Americans this academic year, including women’s golf national player of the year Natalie Srinivasan of Furman, who earned that accolade from multiple organizations.

In addition to priding itself on the academic successes of its student-athletes, the league and its member schools have worked together on the SoCon Academic Exchange, a unique venture that unites the campuses’ academic sides under the SoCon banner to collaborate on several projects, including the SoCon Undergraduate Research Forum (SURF) and the All-SoCon Faculty and Staff teams. Future plans for the SoCon Academic Exchange include an entrepreneurship competition.

Schaus recounted the league’s Student-Athlete Advisory Committee’s summer meeting and lauded the group’s efforts to promote mental health during an online campaign for Mental Health Awareness Week. Schaus also revealed that the conference plans to stage its first Mental Health Summit in the fall of 2021.

A major focus of Schaus’ first year at the SoCon is the upcoming launch of a new strategic plan.

“We have a vision to be the premier mid-major conference in the country,” Schaus said. “We have a number of priorities in the plan that include academic excellence, athletic success, student-athlete well-being, branding and marketing, and championships.”

Major NCAA legislation is currently in the works that will affect college athletics across the board, including transfer policies. Schaus also offered his stance on the NCAA’s name, image and likeness legislation, which the organization will finalize in January.

“There are currently 32 different states that have legislation for name, image and likeness,” he said. “I think the key is, there needs to be a balance between what’s reasonable and fair for student-athletes for compensation but not have that cross over into a pay-for-play situation, which would really diminish the importance of our collegiate model.”

Looking ahead to getting college athletics back in action, Schaus stressed that every decision would be made in accordance with government and NCAA guidelines and with the health and well-being of student-athletes in mind.

“I believe it’s very early,” he said. “I believe that one or two or three months from now, the landscape and the environment could easily be quite different. So, I think it’s hard to be patient, but I believe that we’re learning more and more as we go along. I think much will be dictated through a variety of layers. What’s going to happen on our campuses, whether they’re going to be open, what will happen at the NCAA level, the state level, the local municipality level, all those will influence, and may actually dictate, whether we’re going to be having sports in any different time frame.

“We will be developing contingency plans, to take a look at what will happen with competition with our teams and student-athletes. But first and foremost, health and welfare of our student-athletes and safety will always be first and foremost in that project. I know we’re going to get through this, but I know we’ll do it and we’ll do it together.”