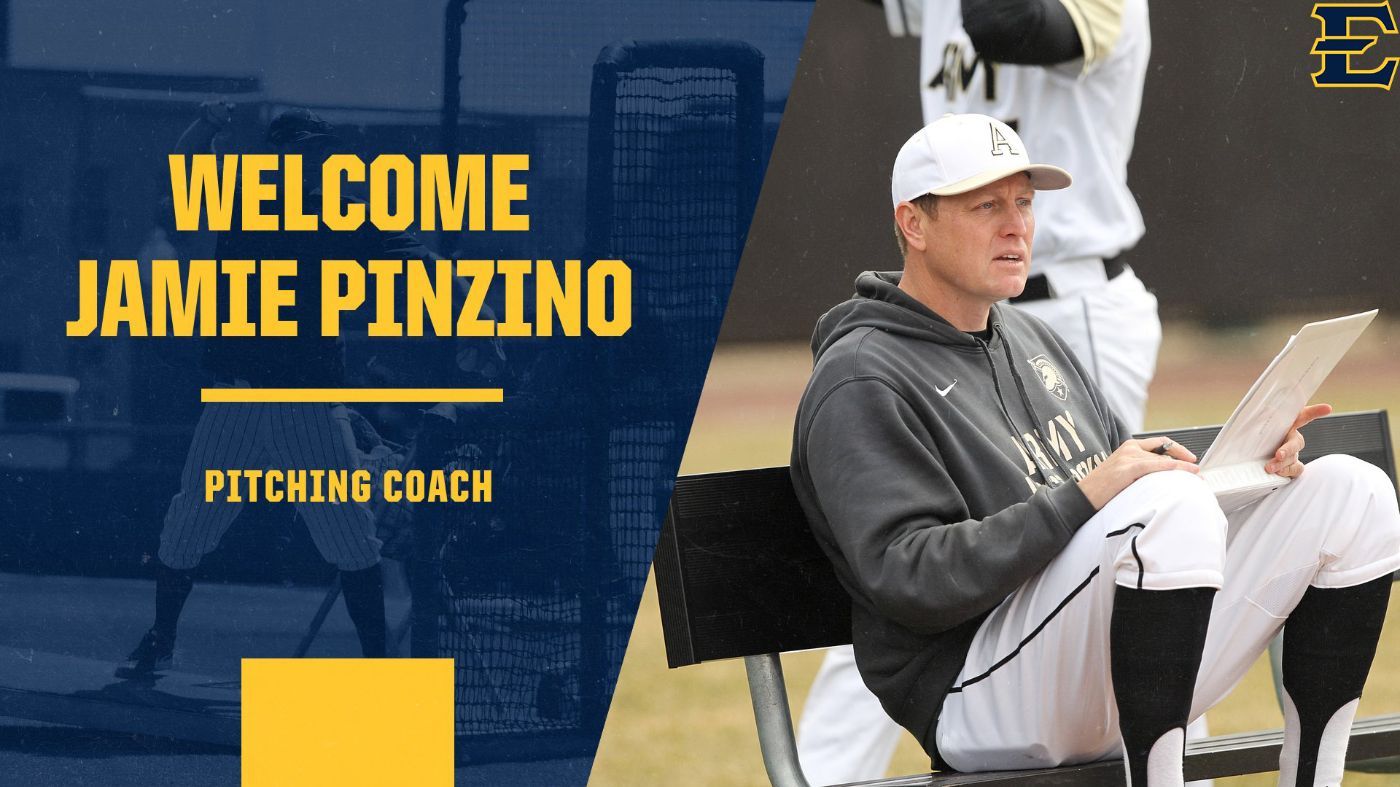 Pinzino, who has more than 20 years of coaching experience, spent the last three seasons as the pitching coach at Army. He was promoted to the Associate Head Coach prior to the 2019 season. Prior to Army, Pinzino spent time as the pitching coach at Virginia Tech (2017), Oklahoma (2013-2016) and William & Mary (2012). He also has experience as a Head Coach at William & Mary, Bryant and Assumption.

“I am thrilled to have Coach Pinzino as our new pitching coach at ETSU,” said Pennucci. “He is a proven winner, developer of talent and has the experience to help our program in many different ways.  I have known Coach Pinzino for over 10 years and have always admired his knowledge of the game and his ability to communicate it. I am eager to work with him on the continued growth of our program.”

In his two full seasons at Army, Pinzino helped coach the Black Knights to back-to-back conference championships and consecutive 35-win seasons. He also helped coach Army to its upset win of N.C. State in the 2018 NCAA Regionals. Under Pinzino, the Army staff dropped their ERA from 5.78 to 4.08 in just one season and set a program record with 495 strikeouts in his first year.

“I am truly thankful to Coach Pennucci and the ETSU administration for the opportunity to come to Johnson City,” said Pinzino. “I am excited to work with a great group of guys and help our players and the program achieve its goals.”

Prior to Army, Pinzino spent a year in Blacksburg, Va., serving as Virginia Tech’s Associate Head and Pitching Coach. During his one-year stint with the Hokies, he coached two MLB Draftees and improved the pitching staff’s ERA by nearly a full run.

Pinzino spent three seasons at Oklahoma from 2013-2016 and heard 13 of his pitchers’ names called in the MLB Draft, including a nation-high seven players in 2015. Pinzino’s staff at Oklahoma returned only 29 percent of its conference innings and 2014 and proved to be one of the best bullpens in the Big 12 that season. The ‘pen held a 3.48 ERA and a 2.11 strikeout-to-walk ratio. In 2015, Sooner logged 524 strikeouts, the third-best in program history. That staff also earned a 3.39 ERA and a 2.5 K-BB ratio.

Before coaching at Oklahoma, Pinzino served as a head coach at William and Mary. With the Tribe, his squad set program records with 39 wins and 17 conference victories in 2013. Under his watch, the program earned its first-ever at-large bid to the NCAA Tournament and advanced to the Raleigh Regional final. The Tribe defeated No. 21 Mississippi State twice in the regional before losing to No. 7 N.C. State in the final. Pinzino was named the 2013 Colonial Athletic Association Co-Coach of the Year and the VaSID Coach of the Year.

In five seasons at Bryant (2006-2010), his team registered a 162-122 while transition the program from the Division II Northeast-10 to the Division I Northeast Conference. The program won the NEC regular-season title in 2010 with a 25-7 as Coach Pinzino was named the NEC Coach of the Year. He was named the Northeast-10 Coach of the Year in 2007 as he led the Bulldogs to its first of two NCAA Division II Regional Finals. With Pinzino at the helm, Bryant posted a program-best 43 wins in 2008 and won the Northeast-10 regional title.

Pinzino started his head coaching career at Assumption where he spent one season with the Greyhounds. Prior to Assumption, he was an assistant coach at Tufts, his alma mater from 2002 to 2004. He has also served as an assistant at Northeastern (2011), Holy Cross (2002) and Pomona-Pitzer (1998).

Pinzino has coached more than 25 pitchers who have been selected in the MLB draft and three conference pitchers of the year.

He is a 1998 graduate of Tufts University with a bachelor’s degree in history. While coaching for Tufts, he earned a master’s degree in educational studies. Pinzino was a four-year letter winner with the Jumbos and helped the team win three ECAC Championships. In 1995, Tufts reached the NCAA Division III regional as the No. 2 seed. Pinzino was the Tufts Baseball Elias Award recipient in 1997.

Pinzino and his wife, Cheryl, have a son, Henry. Cheryl is the current softball head coach at Army.