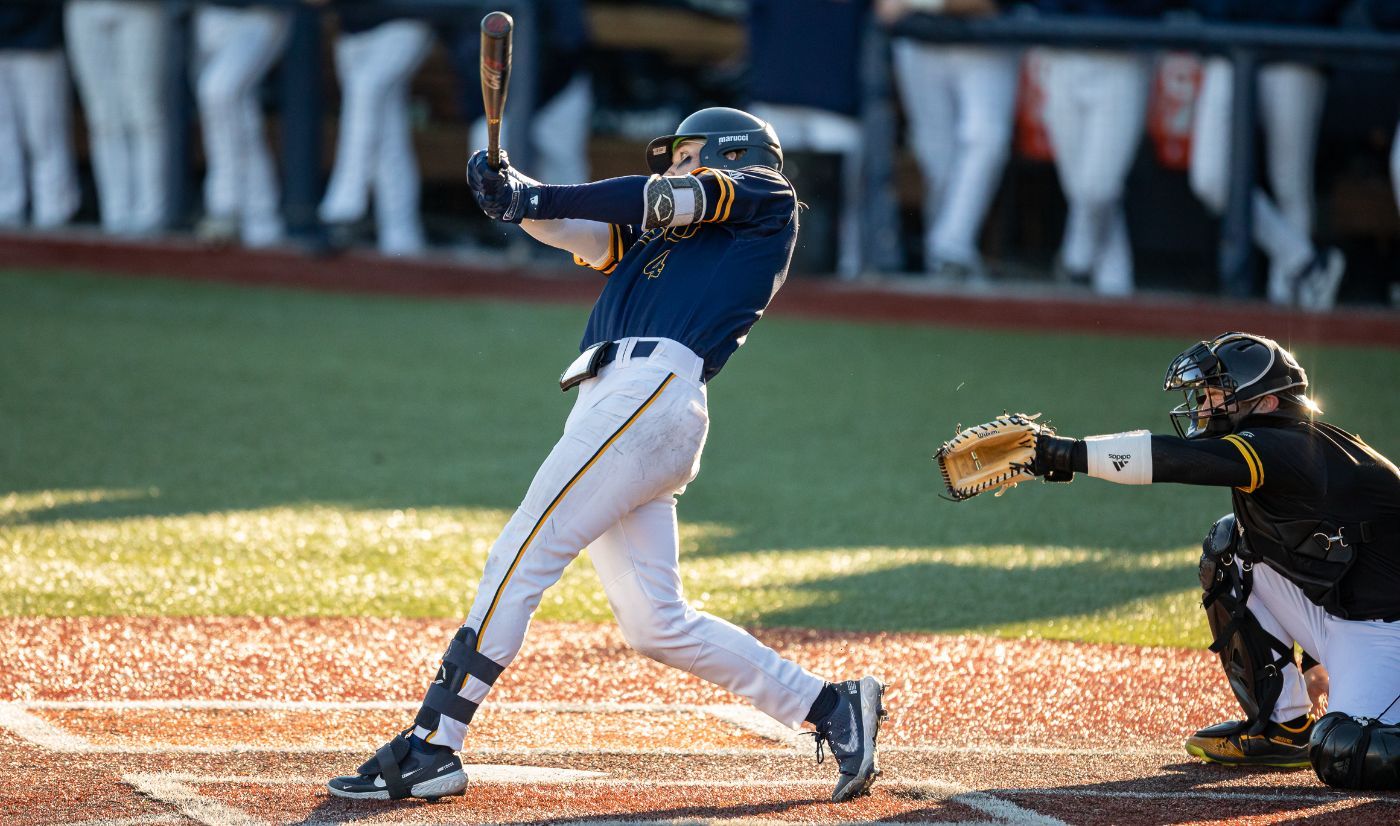 JOHNSON CITY, Tenn. (Feb. 21, 2021) — The ETSU Baseball team and Northern Kentucky concluded their three-game series with a doubleheader on Sunday afternoon. ETSU won game one in walk off fashion, 3-2, while NKU defeated the Bucs 4-3 in game two.

GAME ONE: 3-2, ETSU
The Norse started the scoring early with a solo home run in the top of the first. NKU doubled their lead in the third with another solo shot to left center.

After the Norse’s two runs through three, the Bucs and the Norse combined for just two hits in the fourth and fifth innings.

Picking up where he left off yesterday, sophomore middle infielder, Ashton King (Knoxville, Tenn.) began the run production for ETSU with a solo home run to left. At the end of the sixth, the Bucs trailed 2-1.

Leading off the seventh, Drew Haynie (Brentwood, Tenn.) tied things up with a solo blast just inside the foul pole down the left field line. With both teams going three-up-three-down in the eighth, the game was tied at two heading into the ninth inning.

After a scoreless top of the ninth for the Norse, the Bucs looked for their first walk off win of the season. Ben Jackson (Guyton, Ga.) got the final frame started for ETSU with a leadoff double off the left field wall. With back-to-back walks to Haynie and Jake Lyle (Spring Hill, Tenn.) and one out, Bryce Hodge (Knoxville, Tenn.) stepped up to the dish. Just into the game as a pinch-runner, Markell Graham (Atlanta, Ga.) scored the winning from third off of a wild pitch.

Colby Stuart (Elon, N.C.) got the start on the mound for the Blue and Gold and tossed six innings allowing two runs and four hits. The junior struck out seven and walked none. Landon Smiddy (Knoxville, Tenn.) got the win with three innings in relief for ETSU.

Stat of the day
The win was the first time ETSU won on a walk off that wasn’t a hit since march 29, 2016 vs Radford.

Notables
» King becomes the second Buc in as many seasons to homer in consecutive games. Haynie did it last year on Feb. 22-23.
» The win for Smiddy is the first of his career. He has now tossed three or more innings in all four of his appearances in Blue and Gold.
» Stuart had not allowed two home runs in a single outing all of last season. Mercer hit two against him on May 25, 2019.
» Haynie, in the nine spot, was the only Buc with 2+ hits in the contest. In last year’s shorted season, Haynie had just one multi-hit game.
» Six of ETSU’s nine starters drew a walk.
» Four of the five runs in the contest were scored with a home run. Jackson logged the only other extra-base hit.

GAME TWO: 4-3 NKU
ETSU got on the board first in the opening inning after Lyle was hit by a pitch and came around to score off of an Ethan Cady RBI single. The Bucs doubled their lead in the second as Haynie drove in JL Bland for his third RBI of the afternoon.

Entering the inning with no hits, the Norse tallied four-straight walks in the fourth inning. All four batters scored in the inning with two coming on a Noah Fisher RBI triple.

The Bucs got one run back in the bottom of the ninth as King started the inning off with an RBI double and JL Bland (Memphis, Tenn.) drove him in on the next play. ETSU was unable to get the tying run across as NKU got the victory, 4-3.

Notables
» The Norse recorded three hits after their four-run fourth inning.
» In his freshman season, King did not record a hit in back-to-back games. He recorded a base-knock in all three this weekend.
» Cady and Bland both recorded two hits in the contest. It is Bland’s first multi-hit game of his ETSU career.
» The Bucs hit 4-for-12 with two outs while NKU was 2-for-10.
» NKU’s leadoff hitters combined to go 0-9.
» Northern Kentucky snapped its 21-game losing skid dating back to the 2019 season.

Up next
The Bucs host former SoCon rival, Appalachian State on Tuesday at 3:00 p.m. at Thomas Stadium.