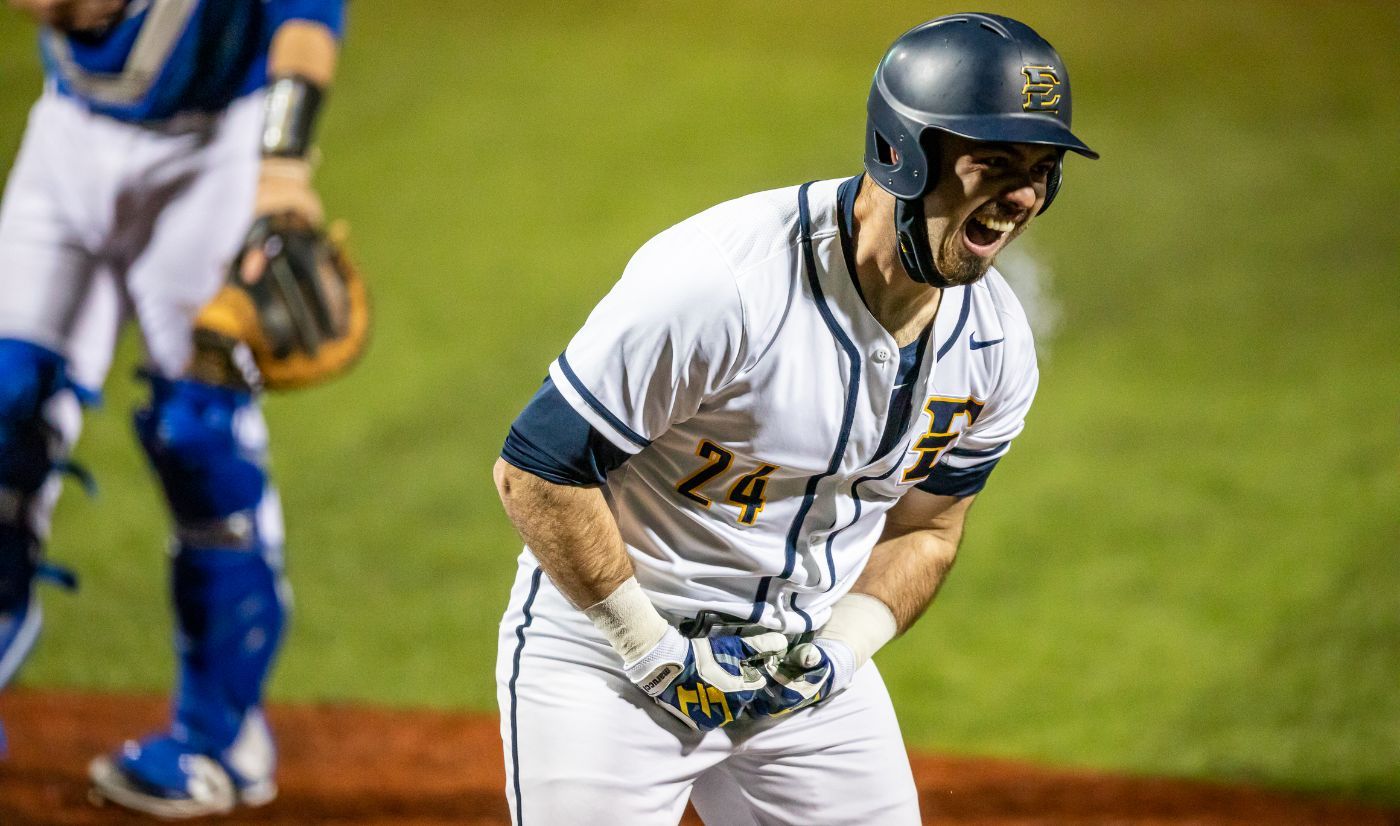 Both teams scored their first run of the game in the third off of errors. UNCA cashed in on a fielding error to open the inning and the batter later scored. In the bottom of the third, with a runner on second and third, David Beam (Knoxville, Tenn.) lined out to short, but in an attempt to double-up the runner on second, the Bulldogs’ shortstop threw the ball into right, allowing Jake Lyle (Spring Hill, Tenn.) to score from third.

In the fourth with the game tied at one, Ethan Cady (Soddy Daisy, Tenn.) belted one onto the train tracks in right to give the Bucs their first lead of the contest. The next inning, Lyle led off with a double down the left field line and JL Bland (Memphis, Tenn.) drove him in with an RBI single up the middle to give ETSU a 3-1 lead.

Two batters later, after a sacrifice bunt, Beam was back at the dish and he clobbered one to left for his first homer of the season, scoring Bland. After the fifth, the Bucs led 5-1. In the seventh, the Bucs capitalized on incontinent pitching from UNCA to tack on four more runs. Bland led off the inning by reaching on an error and then with the bases loaded and two outs, Bryce Hodge (Knoxville, Tenn.) delivered his first extra-base hit in Blue and Gold, a 2-RBI double to left. Hodge later scored in the inning courtesy of a balk.

Hunter Loyd (Knoxville, Tenn.) was dominant from start to finish on the mound as the sophomore tossed seven innings of three-hit baseball allowing one unearned run and striking out seven. Loyd didn’t allow a walk and set the Bulldogs down in order in three of the seven innings.

Stat of the game
This is the fifth time in ETSU’s 35 wins over UNCA the Bucs have won by eight or more runs.

Notables
» After the home run, three of Cady’s first five hits this season have gone for extra bases.
» Kyle Richardson extended his on-base streak to a team-high 11 game. Beam (7), Cady (6), Lyle (5) and Haynie (4) also extended theirs.
» ETSU’s leadoff hitter got on base in each of the Bucs’ last six innings at the plate.
» Loyd’s seven innings pitched are a career high as he earned his first career quality start. Entering the weekend, no Southern Conference pitcher had tossed seven innings and allowed three hits or less in a start.
» The Bucs have now hit 2+ home runs in four of their five games this season.

Quotables
Hunter Loyd on his successful outing: "My slider was working really well today. I attacked the hitters early to get quick outs and kept my pitch count down. Our offense gave me room to work and allowed me to keep being aggerssive on the mound."

Up next
The Bucs and the Bulldogs conclude the two-day series tomorrow at Thomas Stadium with a doubleheader beginning at 2 p.m.