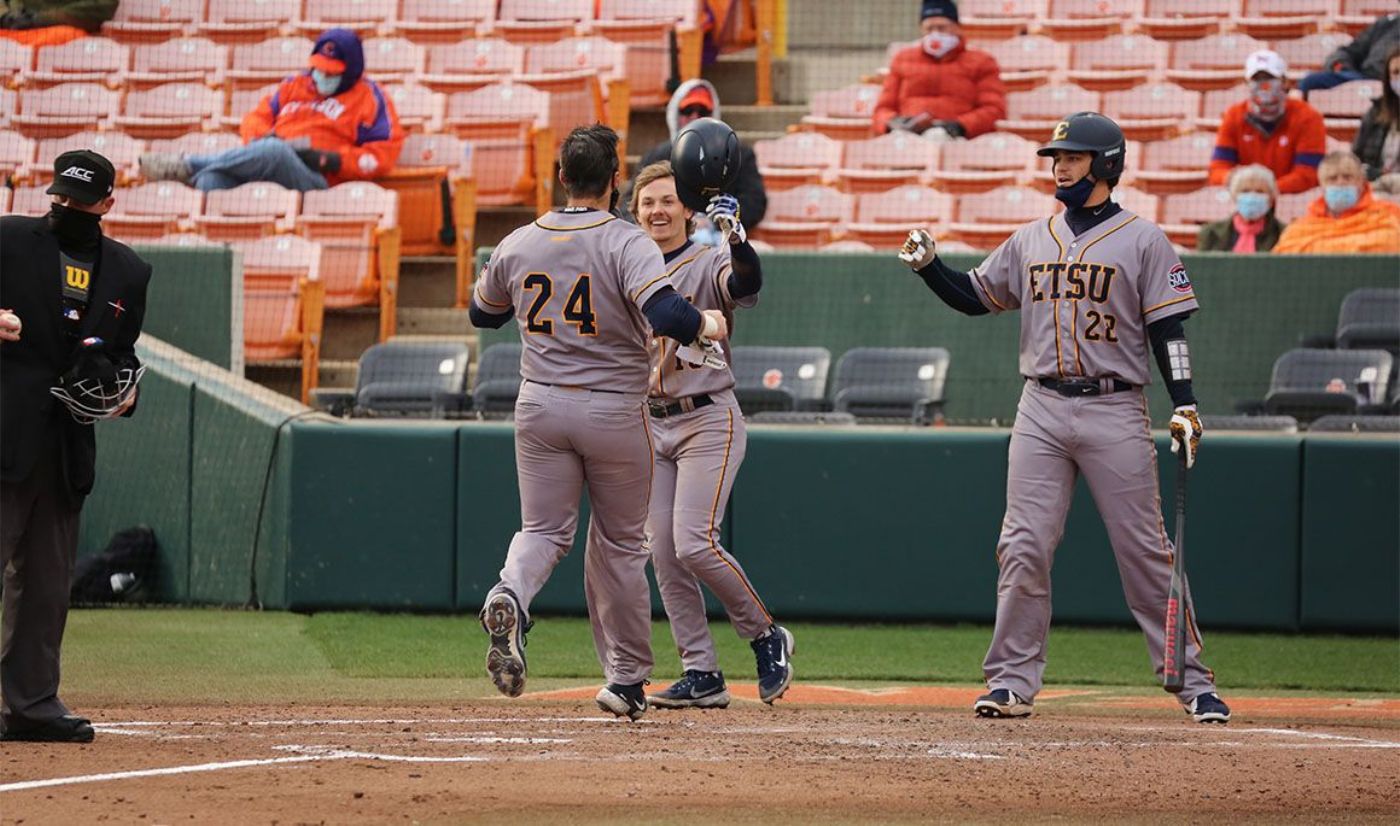 JOHNSON CITY, Tenn. (March 4, 2021) — The ETSU Baseball team will close out their final home non-conference series this weekend as the Blue and Gold host the Eastern Kentucky Colonels. Friday’s first pitch is slated for 3 p.m., while Saturday’s doubleheader will begin at 1 p.m.

Saturday’s doubleheader will be aired on ESPN+ with Mike Gallagher on the call.

ABOUT ETSU
ETSU enters the weekend with a 5-3 record. The Bucs went 2-1 against Northern Kentucky in the season-opening series and lost to Appalachian State in their first midweek contest. Last weekend, Bucs swept UNC Asheville over the weekend for their first series sweep of the season. ETSU outscored UNCA 21-6 in the three-game series. The Bucs tallied 11 extra-base hits over the weekend and drew 18 walks. ETSU’s pitchers held just a 1.33 ERA against the Bulldogs and struck out 25, walking nine. On Tuesday, the Bucs suffered their first road loss of the season at Clemson, one of three Power-5 opponents for ETSU this season. Clemson defeated the Bucs 7-3 with three home runs and was successful at the plate with two outs.

ETSU’S LAST FIVE
Over the last five games, the Bucs are 3-2 with two midweek losses (Appalachian State and Clemson). In the last five games Kyle Richardson (Zionsville, Ind.) is leading the team with a .462 batting average, while David Beam (Knoxville, Tenn.) is hitting .333 and Ethan Cady (Soddy Daisy, Tenn.) is .316 at the dish. The Bucs have nine home runs and eight doubles over the last five contests, averaging 1.8 HR and 3.4 XBH per game.

CADY’S CONSISTENCY
Ethan Cady leads the team with a .345 batting average and a .441 on-base percentage. He has 10 hits this season with six of them going for extra bases. Cady leads the team with three multiple hit games and has two multi-RBI games. The Soddy Daisy native has an eight-game on-base streak and four-game hit streak, both are tied for the team lead. He has moved up in the batting order this season, beginning the season in the 4th and 5th spot, but has started the last four games as the 2nd man in the lineup.

LOYD’S TURNAROUND
In his freshman year campaign, Hunter Loyd (Knoxville, Tenn.) struggled on the mound as the Knoxville native had a team-high 14.54 ERA in 4.1 innings of work. In 2020 he struck out five batters, walked seven and his opponents hit .333 at the plate. His start in the season opener was the complete opposite. Loyd set a career-high with nine strikeouts on Saturday afternoon against NKU en-route to his first career victory. In 5.1 innings of work, the sophomore allowed two earned runs, four hits and walked one. In his second start of the season, Loyd was even more dominant and tossed seven innings and allowed one unearned run and three hits against UNC Asheville. He struck out seven and didn’t walk a batter.

ETSU’S STARTING ROTATION
Loyd will be on the bump for the Bucs in the series opener with sights set on his third career victory. This season, he is 2-0 and has 16 strikeouts and one walk in two starts. The sophomore righty holds a 1.46 ERA in 12.1 innings of work. Colby Stuart (Elon, N.C.) will get the nod for game two of the series in a matchup between two southpaws. Both of Stuart’s two starts have been no decisions, but the Bucs are 2-0 in those contests. Stuart has a 3.60 ERA entering the weekend and has 10 strikeouts in 10 innings of work. The series finale, Nathanial Tate (Manchester, Tenn.) is scheduled to make his first weekend start for ETSU. He has two appearances and one start this season with a 1.80 ERA in five innings of work. Tate has struck out nine and not talked a batter.

ABOUT EASTERN KENTUCKY
Eastern Kentucky is 2-5 entering the weekend and is coming off a 6-3 loss at Kentucky. Five of EKU’s seven games have been decided by four runs or less. The Colonels picked up a big win at No. 15 Georgia Tech in their second game of the season, 9-6. The team’s other win came at Presbyterian, 5-3. Of EKU’s seven games, five have come against Power-5 opponents (No. 15 Ga. Tech, No .4 Louisville and Kentucky).