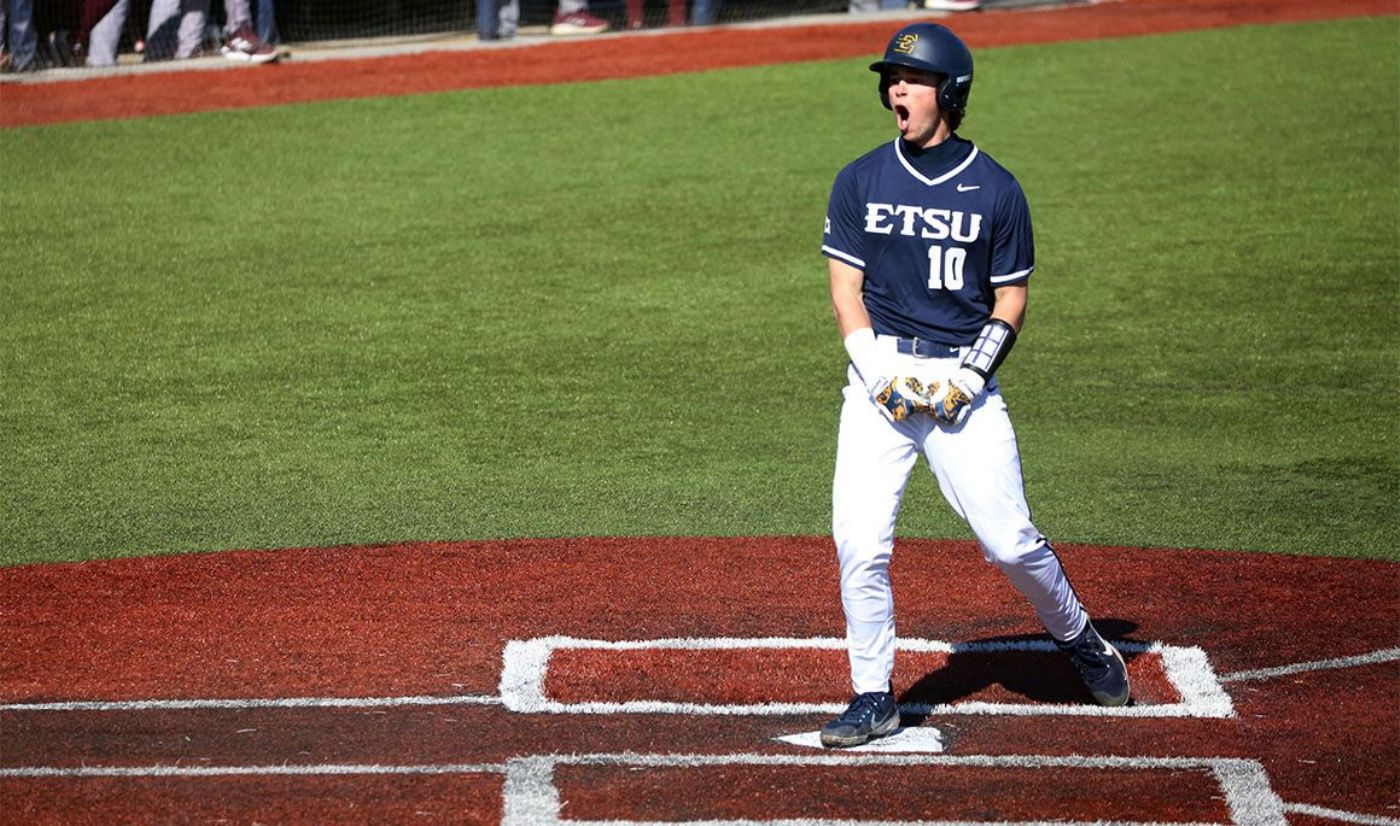 JOHNSON CITY, Tenn. (March 6, 2021) — The ETSU Baseball team began the weekend series against Eastern Kentucky with a one-run victory on Friday afternoon. The same came in game one of Saturday’s doubleheader between the two teams as ETSU won 3-2 in extra innings. In game two of the twin bill, EKU avoided the series sweep with a 9-7 victory at Thomas Stadium.

Both teams did not get a hit until the 10th inning. All baserunners in the extra frame reached with two outs as EKU’s Cam Ridley singled to left field for the. Colonels first hit since the sixth inning. In the bottom half, with two outs, Ben Jackson got the two-out rally started with a full-count walk. The next 12 pitches thrown by EKU pitching were all out of the zone as the Bucs used three straight walks for their second walk-off win of the season.

Both starting pitchers allowed two earned runs and finished with a no decision. For the Bucs, Colby Stuart (Elon, N.C.) struck out five in six innings of work and allowed eight hits. The Colonels’ Jake Lewis got the nod and pitched 6.1 innings, striking out six and allowed four hits.

Matthew Bollenbacher (Powder Springs, Ga.) entered in the seventh inning for ETSU and picked up the win. He pitched a career-high four innings and struck out two. He threw 44 pitches with 32 of them (74%) being strikes.

Stat of the day

The win in game one marked the second walk-off win for ETSU this season that did not come via a hit (wild pitch vs NKU).

Notables
» ETSU was outhit (8-4) and picked up the win for the second straight game. Last season, they never accomplished that feat.
» David Beam (Knoxville, Tenn.) and Ethan Cady (Soddy Daisy, Tenn.) both extended their five-game hit streak to six games.
» In 10 games this season, King has hit four home runs. Last season, he had just two in the same number of contests.

Like they did in game one, EKU scored first, this time with a home run off the top of the wall in left. The Colonels scored the first three runs of the game with a sacrifice fly in the third and another solo shot in the fourth.

After eight ETSU batters reached base via a free pass, the Bucs got their first hit with two outs in the fourth. With the bases loaded, Beam tallied his 100th career hit and tied the game at three with an RBI single to left.

The run production continued for both teams in the fifth. EKU took advantage of a wild pitch to put two runners into scoring position, and later both of those runs scored on balls hit into the infield, one hit, and a fielder’s choice.

ETSU evened the score in the fifth after two walks and a JL Bland RBI double down the left field line. With one out and a new pitcher in the game, Jake Lyle attempted a squeeze bunt, but EKU was ready for it and got Richardson out at home.

The Bucs continued to fight as the Blue and Gold plate in the eighth. ETSU tallied three in the inning, with two coming on another Cady RBI double. The final run of the game came on a sacrifice fly from King, scoring Jackson.

Notables
» Cady and Beam have both reached base safely in all 11 games to start the season for ETSU. Cady extended his hit streak to a team-high seven games in game two.
» Beam’s 100 career hits are the most among active players.
» The Bucs turned two double plays in the game, the most in a single game this season.
» The two teams combined for 17 walks with ETSU drawing 11 of them. The game saw 12 different pitchers who totaled 25 strikeouts, ETSU had 10, EKU tallied 15 on the mound.
» EKU’s Caleb Upshaw and Santiago Peralta led all hitters with three hits. Upshaw tallied two RBI.
» The top five of the Colonels’ lineup garnered all eight of the team’s RBI.

Up next
The Bucs host their final nonconference home game of the season on Tuesday vs Radford at 3 p.m.