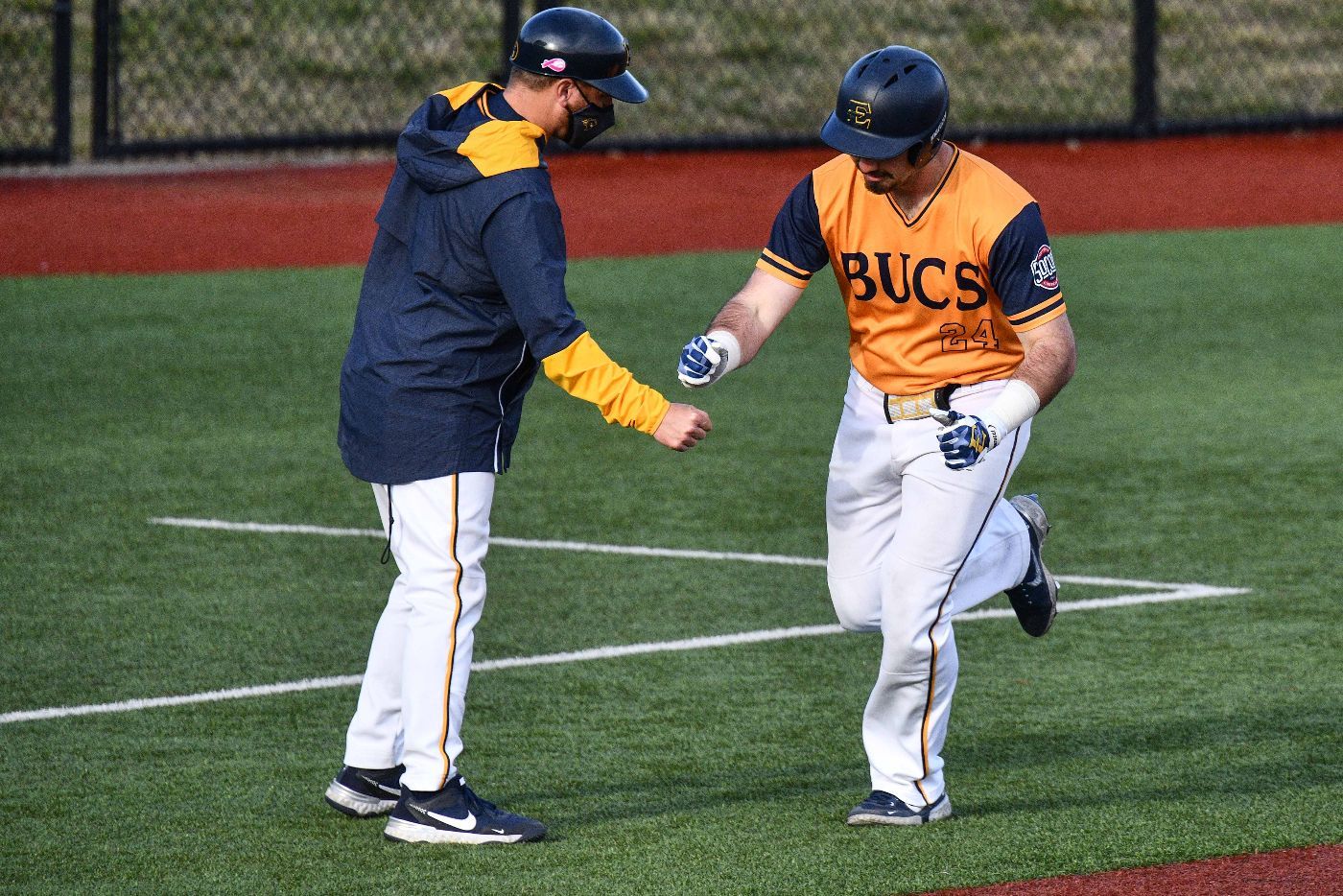 JOHNSON CITY, Tenn. (March 9, 2021) — The ETSU Baseball team picked up its first midweek victory of the season as the Bucs shutout the visiting Radford Highlanders, 6-0 at Thomas Stadium on Tuesday afternoon.

The Bucs got on the board in the second after Kyle Richardson (Zionsville, Ind.) recorded the first hit of the afternoon, a leadoff double down the left field line. Jake Lyle (Spring Hill, Tenn.) drove in Richardson with a one-out groundout to shortstop.

In the third, ETSU capitalized on a Radford fielding error and scored three runs with two outs. Bryce Hodge (Knoxville, Tenn.) launched the first pitch of his at bat to right center for his third double of the season, driving in Ashton King (Spring Hill, Tenn.) and JL Bland (Memphis, Tenn.). Richardson drove in Hodge with his second double of the afternoon to give ETSU a 4-0 lead heading into the fourth.

Richardson’s production at the plate wasn’t done as the designated hitter blasted another RBI double off the left center wall in the fifth to plate King.

ETSU scored its final run of the contest on Ethan Cady’s (Soddy Daisy, Tenn.) fourth home run of the season in the bottom of the seventh.

Making his second-straight Tuesday start, Tucker Rogers began the game with three shutout innings. The senior set down the first six batters he faced. In the third inning, Radford loaded the bases with one out, and Rogers got out of the jam with a strikeout and a ground out. The Bucs used six different relief pitchers who combined to give up two hits, struck out six and gave up no runs.

Stat of the game
Buccaneer pitchers recorded the first shutout for ETSU since Feb. 15, 2020 vs Rider.

Notables
» Richardson’s three doubles are the most for the junior. It marked the most doubles by a Buccaneer since Jake Madole (Hampstead, N.C.) logged three vs Toledo in the season opener last season.
» Rogers tied a career high with five strikeouts, all three of those performances came in midweek contests.
» ETSU pitchers tallied 11 strikeouts, while the Bucs outhit the Highlanders 8-4.
» Buccaneer pitchers combined to allow just one walk for the second time this season.
» Hodge and Richardson registered their third 2-RBI game of the season.
» Cady and beam extended their season opening on-base streak to 12 games.

Up next
This weekend, the Bucs travel to North Carolina Central for a three-game series. Friday’s first pitch is slated for 4 p.m.