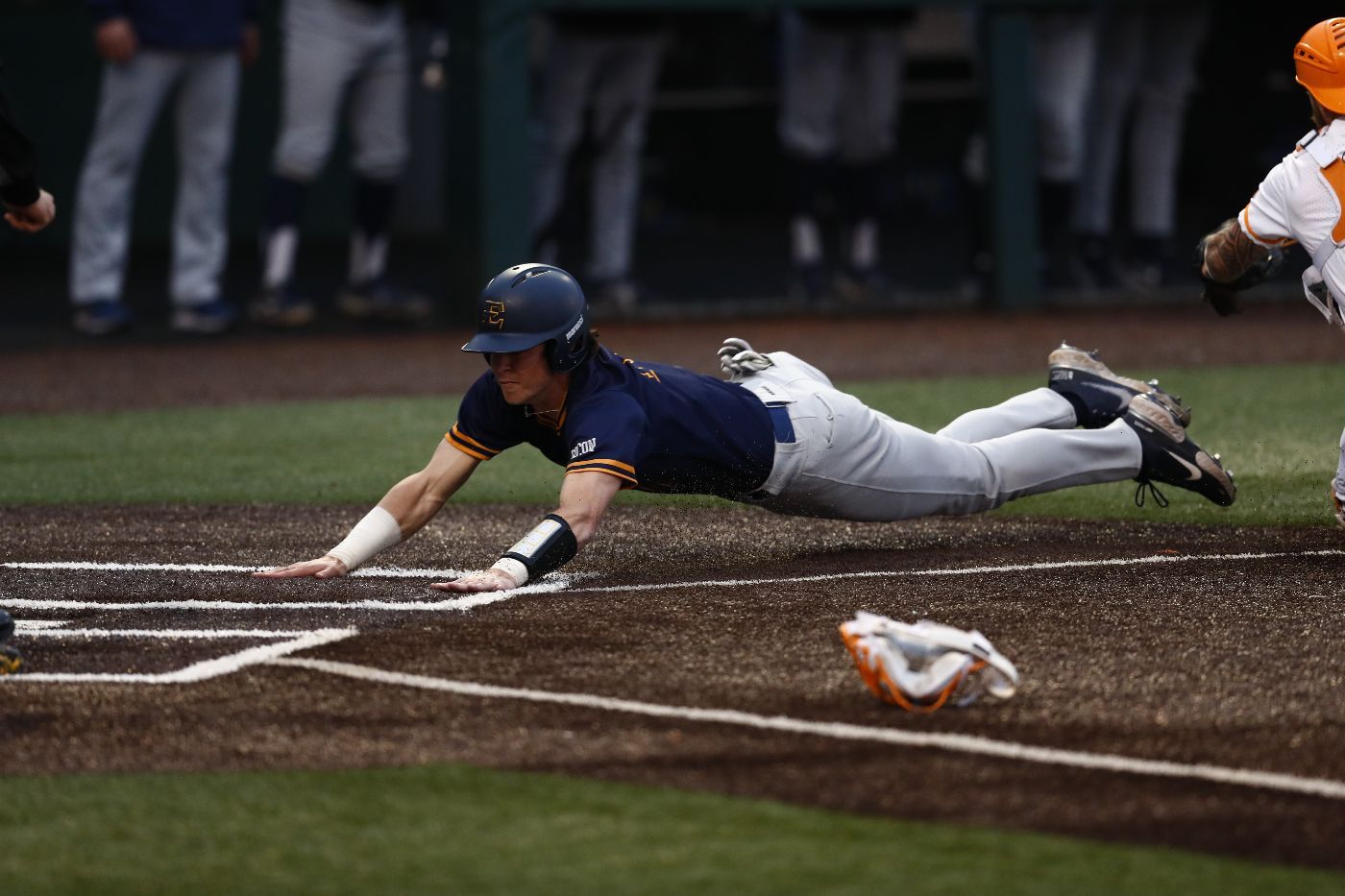 KNOXVILLE, TENN. (March 16, 2021) — Throughout the 54-year history between the ETSU Baseball team and the University of Tennessee, there had been just two extra-inning games in Knoxville.

The Bucs and the 10th-ranked Volunteers added to that number on Tuesday evening as the two teams were locked at six after nine innings. The Vols defeated the Bucs in 10, 9-6 off of a walk-off home run.

How it happened:
The hosts got on the board in the second inning with the game’s first hit, a Jordan Beck leadoff home run just over the left field fence. Tennessee doubled its lead in the third with a one-out RBI single to center.

ETSU got the bats going in the fourth. The strong offensive inning at the plate began with a one-out walk to Ashton King (Knoxville, Tenn.). After an Ethan Cady (Soddy Daisy, Tenn.) single, Kyle Richardson (Zionsville, Ind.) drove in ETSU’s first run with an RBI single through the left side. Two pitches later, Bryce Hodge (Knoxville, Tenn.) tied the game with a single to right center, scoring Cady. The Blue and Gold took the lead in the inning with Jake Lyle’s (Spring Hill, Tenn.) first hit of the contest, a one-out single to left.

With a 3-2 lead heading into the fifth, Cady continued his home run success. He launched a moonshot over the wall in right to give ETSU a 4-2 advantage. The Vols battled back in the sixth, tying the game at four. Tennessee tallied two walks and two hits in the frame, highlighted by a Liam Spence RBI triple. Zach Kirby (Uptown, Calif.) got out of the inning with a pickoff to first, his first of the season.

The Vols regained the lead in the eighth with a two-out RBI double just inside the left field line. Fresh onto the mound, Daulton Montagna (Pennsville, N.J.) got out of a two-out bases-loaded jam with a strikeout to limit any other damage.

In the top of the eighth, down one, King and Cady both reached base and got into scoring position off of a Tennessee fielding error. Both runners came around to score on a Noah Webb (Kodak, Tenn.) sacrifice fly and a Hodge groundout. ETSU took a 6-5 lead into the bottom half, but it didn’t last long. The first three batters reached base in the bottom of the eighth. After a Seth Chavez strikeout, the Vols tied the game at six with a sac fly to right.

In the bottom of the ninth, Tennessee got the winning run on to start the inning. Showing bunt on the next pitch, the Vols moved Logan Steenstra to second. Steenstra advanced to third after the umpires ruled obstruction at second base. With the winning run 90 feet away and just one out in the inning, Chavez retired the next batter on a high fast ball. The junior reliever sent the game into extras as the Vols skied the final out of the inning to right.

The Blue and Gold got a hit in the 10th, but were not able to advance anyone into scoring position. Matthew Mercer (Chattanooga, Tenn.) began the bottom half on the mound. With two on and one-out, Mercer got the next Vol batter to fly out to right center. On a 2-1 count with two outs, Beck hit his second home run of the game, a blast over the wall in left to walk it off.

Both starting pitchers also met in last season’s matchup, which was the last game of the shortened season for both teams. ETSU’s starter, Tucker Rogers (Raleigh, N.C.), pitched three innings, allowing two runs, one earned, on three hits and struck out three. Camden Sewell allowed three runs on four hits in 3.1 innings of work with two walks and three K’s.

Stat of the Day
In the 88-game series between the Bucs and the Vols, dating back to 1967, this was just the fifth extra inning contest. It’s the first since April 5, 2006 where ETSU won 8-7 at home in 11. ETSU is now 1-4 in those contests against Tennessee.

Notables
» Cady hit his team-leading eighth home run in the contest. The Soddy Daisy, Tenn. native has reached base in all 16 games to start the season and has an active hit streak of 12. He recorded his second three-hit game of the campaign.
» With his team-high two RBI in the contest, Hodge tallied his fourth multi-RBI game of the season.
» Webb logged his first career RBI in the contest, while Lyle and Richardson also plated runs.
» This was ETSU’s second extra-inning game of the season, they are 1-1 in those contests. The Bucs are now 0-4 when allowing 10 or more hits.
» Tennessee’s Beck led the contest with 5 RBI and two home runs in his 3-for-6 outing.
» The Vols improved their all-time record against ETSU to 68-20.

Up next
The Bucs begin Southern Conference play this weekend at Thomas Stadium against VMI. First pitch for the three-game series is slated for Friday at 5 p.m.