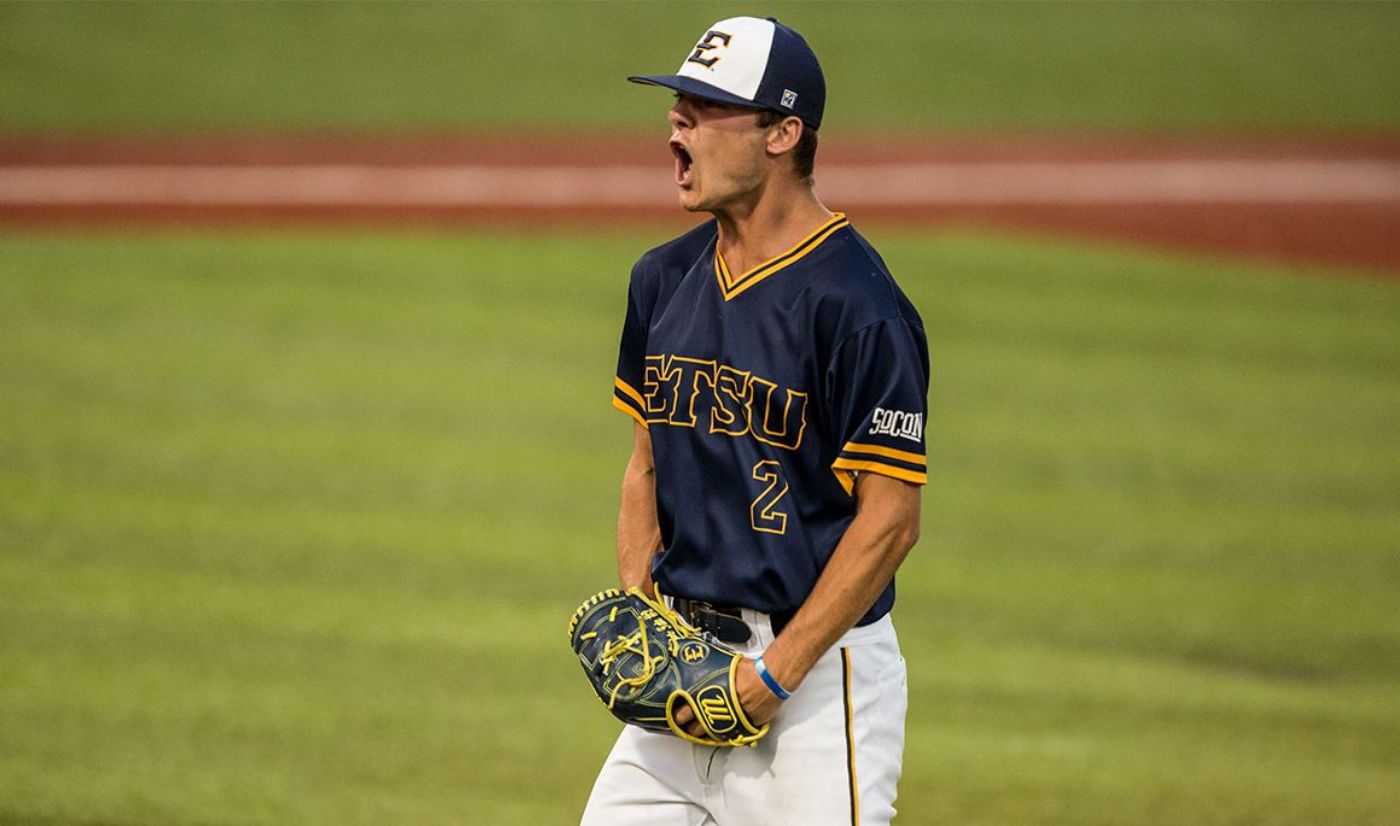 GAME 1: VMI 6, ETSU 3
After the two teams combined for just one hit through the first four innings, Ashton King (Knoxville, Tenn.) began the Bucs’ production at the plate with a 2 RBI single to center in the fifth. Noah Webb (Kodak, Tenn.) and Ben Jackson (Guyton, Ga.) scored after walking in the inning.

VMI tied the game in the seventh with a Trey Morgan RBI single and a squeeze play laid down by Zac Morris. In the bottom half of the frame, King delivered again, this time with an RBI double, scoring Sean Kearney (Powell, Tenn.).

After the visitors tied the game in the eighth, the game was tied at three heading into the final frame. In the top half, the Keydets regained the lead with a Callen Nuccio leadoff home run. VMI tripled their one-run lead with two more after an RBI double and two-out single. Looking to send the game into extras, ETSU had runners on first and second, but were unable to score.

Stat of the Game
The two teams combined for one hit in the first four innings and tallied 14 in the rest of the game.

Notables
» Colby Stuart (Elon, N.C.) got the nod for the Bucs and tossed a quality start with seven strikeouts in six innings. He allowed two runs on four hits and walked one.
» Cady extended his season-opening on-base streak to 18 and his hit-streak to 14. He drew two walks in the contest.
» With all three of ETSU’s RBI in the game, King now has 3+ RBI in three contests this season.
» VMI’s Cody Wagner and Will Knight joined king with two hits in the game. The first seven batters in the Keydets’ lineup recorded a hit.

GAME 2: ETSU 7, VMI 2
The Bucs scored in three of the first four innings, In the opening frame, the Bucs with a David Beam (Knoxville, Tenn.) RBI single. Cady drove in Webb in the second and fourth with two singles to the outfield.

ETSU doubled its lead in the sixth, plating three runs with two outs. The scoring began as King scored on a wild pitch and later in the at bat, Beam plated Cady and Jake Lyle (Spring Hill, Tenn.)

King continued the run production in the seventh with his fourth RBI of the afternoon and first of game two. He doubled to right field to score JL Bland (Memphis, Tenn.) for ETSU’s seventh and final run of the afternoon.

VMI plated both of its runs in the ninth with an RBI single and a groundout with one out and the bases loaded.

Stat of the Game
The ETSU pitching staff walked just two batters and struck out 12. In the two games, the squad walked three and had 22 punch outs.

Notables
» Tate tossed his first career quality start and his first win of the season. His career-high 11 strikeouts are the most by a buccaneer pitcher this season and the most since Landon Knack struck out 16 vs Wagner last season.
» Cady’s season-opening hit streak sits at 19 games, while the senior outfielder extended his hit streak to 15 games. He garnered his third three-hit game of the season.
» King’s stellar day continued in game two with a 3-for-4 evening with an RBI, a walk and a run scored.
» Beam led the game with three RBI, a season high.
» Brady Jones (Woodstock, Ga.) pitched two shutout innings in relief. His ERA in 6.1 innings of work this season is 0.00.
» ETSU has won 18 of their last 22 three-game weekends dating back to the beginning of the 2019 season.

Up next
The Bucs travel to Samford this weekend to face its second division opponent. The series begins with a 5 p.m. (EST) first pitch on Friday, March 26.