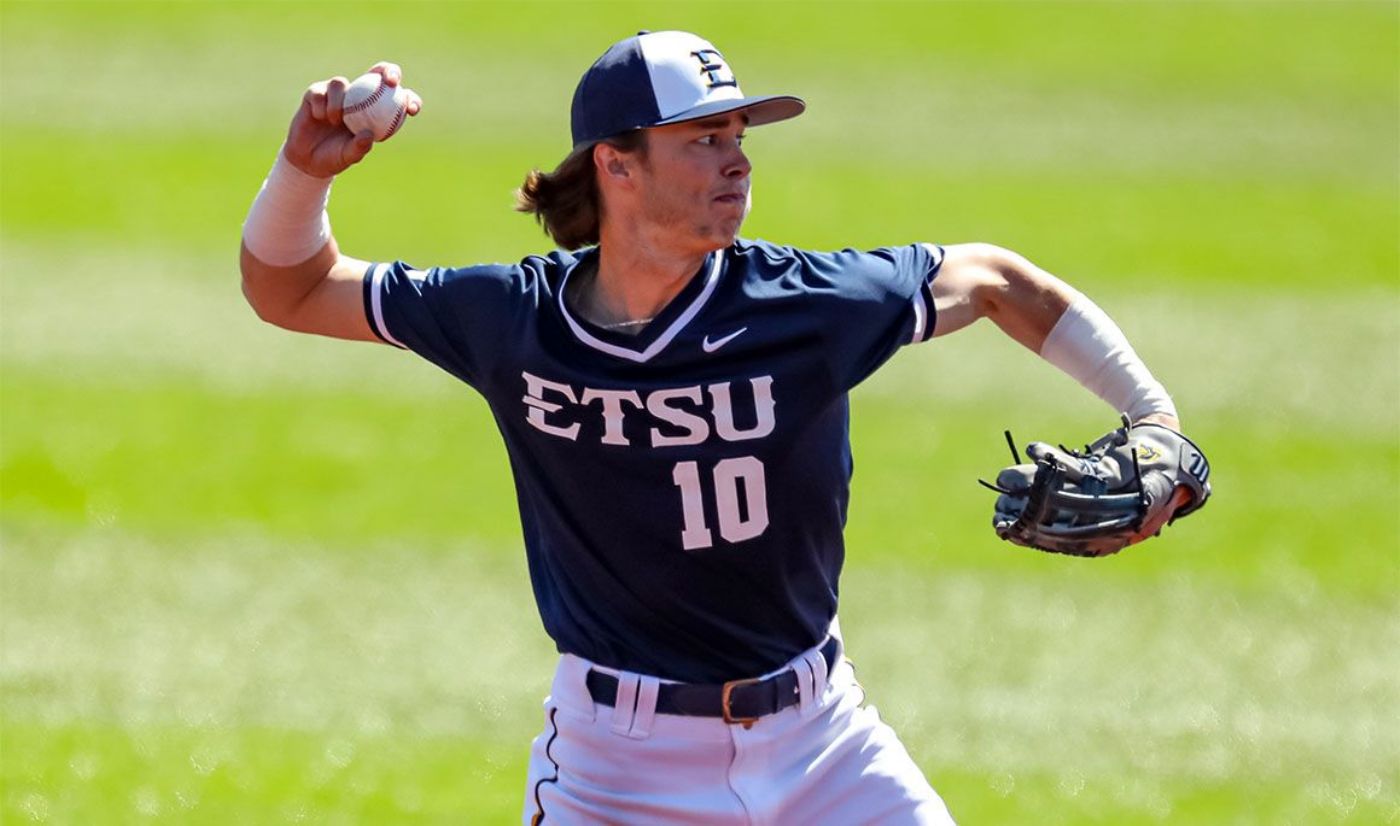 BIRMINGHAM, Ala. (March 26, 2021) — The ETSU Baseball team faced its first Southern Conference road test on Friday afternoon against the Samford Bulldogs. The Bulldogs swept the Buccaneers in the Friday doubleheader at Joe Lee Griffin Field, winning game one 7-3 followed by a 10-2 victory in game two.

How it happened:
GAME ONE: SAMFORD 8, ETSU 3
With both teams locked at zero through two, the Bucs and the Bulldogs both got on the board in the third inning. Reese Farmer (Winterville, N.C.) was the first to get on in the inning with a bunt single. He quickly scored off an Ashton King (Knoxville, Tenn.) RBI double down the left field line. King advanced to third on an error and was driven in by Ethan Cady (Soddy Daisy, Tenn.) on the next pitch. Cady scored on a passed ball to put ETSU up 3-0.

Samford did not have a runner reach until the third where two out of the first three batters reached. The hosts got on the board with two outs on a passed ball. The Bulldogs cut their deficit in half in the fifth as Sonny DiChiara plated Max Pinto with a sacrifice fly.

Up one in the eighth, Seth Chavez entered for ETSU for the six-out save. With one out, the Bulldogs got one man one with their third hit of the afternoon. After a walk and a single, Samford tied the game at three before taking the lead on a squeeze play. The Bulldogs added to their big eighth inning with a three-run home run to left to take a 7-3 lead into the ninth.

Stat of the Game
The teams combined for 14 walks and 20 strikeouts. ETSU’s pitching staff struck out 11 and walked 10.

Notables
» Hunter Loyd (Knoxville, Tenn.) started on the mound for ETSU and pitched 4.1 innings. He allowed two runs, one earned, struck out eight and walked six.
» King tallied his third three-hit game of the season which is tied for a team high. He extended his on-base streak to 11.
» The Bucs suffered their first loss after facing a left-handed starter, they were previously 6-0.

GAME TWO: SAMFORD 10, ETSU 2
Samford brought its long ball success into game two. The Bulldogs struck first in the opening inning with a two-run home run to left center off the bat of DiChiara. The hosts doubled their lead in the second with a sacrifice fly and a bunt single.

ETSU cut its deficit in half in the fifth with a Noah Webb two-run home run to left center.

DiChiara hit his second long ball of the game in the fifth to give the Bulldogs a 6-2 lead. The hosts extended their lead in the sixth, plating four runs off of six hits and a Buccaneer error.

Stat of the Game
After ETSU limited Samford to seven hits in game one, the Bulldogs tallied 14 hits.

Notables
» With singles in both games, Cady extended his season-opening on-base streak to 21 and his hit-streak to 17.
» Webb hit his first career home run in game two after not appearing in game one. The contest was also Webb’s first 2-RBI game of his two-year Buccaneer career.
» Colby Stuart (Elon, N.C.) got the nod for the Bucs, allowing six earned runs in 4.2 innings of work.
» Samford’s DiChiara went 3-for-3 at the dish with two homers and a walk.

Up next
The Bucs and the Bulldogs conclude the series tomorrow in Birmingham at 2 p.m. EST.