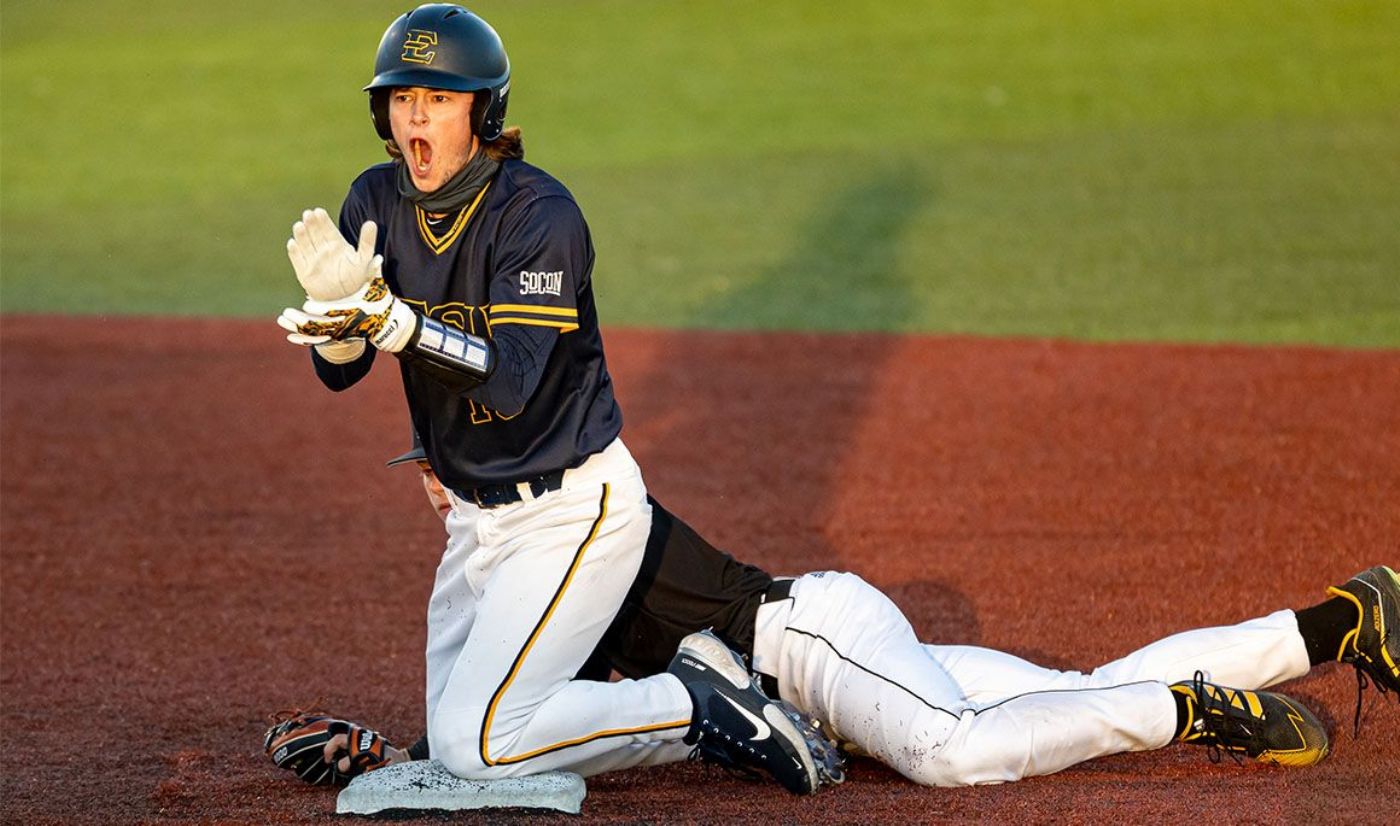 BIRMINGHAM, Ala. (March 27, 2021) — The ETSU Baseball team concluded its series in Birmingham with a 5-1 victory over the Samford Bulldogs at Joe Lee Griffin Field on Saturday afternoon. ETSU handed Samford its first loss in Southern Conference play this season, while the Bucs moved to 3-3 in league action.

As they did in game one of the series, ETSU got on the board first with a squeeze play in the second. Justin Hanvey (Purcellville, Va.) drove in David Beam (Knoxville, Tenn.) who led off the inning with a double to right center.

After an Ashton King (Knoxville, Tenn.) leadoff double for the Bucs’ second hit of the day, Ethan Cady (Soddy Daisy, Tenn.) did what he does best. The starting right fielder hit a two-run home run over the right field wall to give ETSU a 3-0 lead in the sixth.

King extended the lead in the seventh, capitalizing on Samford’s second error of the afternoon. With Hanvey on third and Noah Webb (Kodak, Tenn.) on second, King singled through the left side to give ETSU a 5-0 advantage heading into the bottom of the seventh. Samford got on the board in the bottom half of the inning as they had the bases loaded with one out and reached on a fielder’s choice.

Nathanial Tate (Manchester, Tenn.) and Matthew Bollenbacher (Powder Springs, Ga.) were dominant on the mound. Tate got the start for the Blue and Gold and allowed one run, three hits and struck out seven in 6.1 innings of work. Bollenbacher closed out the game shutting out the Bulldogs in the final 2.2 innings. He allowed one hit and fanned two batters.

Notables
» Cady hit his ninth home run of the season in the sixth. He has reached base in every game this season, extending his streak to 22 games… the longest streak to start the season by a Buccaneer in the last six years.
» King garnered his second multi-hit game of the series, going 2-for-4. He went 6-13 in the series and extended his on-base streak to 13.
» After entering SoCon play without pitching five complete innings in a game, Tate has recorded quality starts in his last two outings.
» Three of ETSU’s five hits went for extra bases with Cady’s homer and doubles by King and Beam.
» ETSU limited Samford’s bats with two outs as they went 0-10 in those situations. Additionally, the Bulldogs were 0-13 with runners on base.
» Five of ETSU’s leadoff batters reached base.
» The Blue and Gold improve to 9-0 when holding opponents to two runs or less.

Up next
ETSU continues SoCon play next weekend facing its third division opponent of the season in Greensboro at UNCG. The series begins on Friday at 6 p.m.