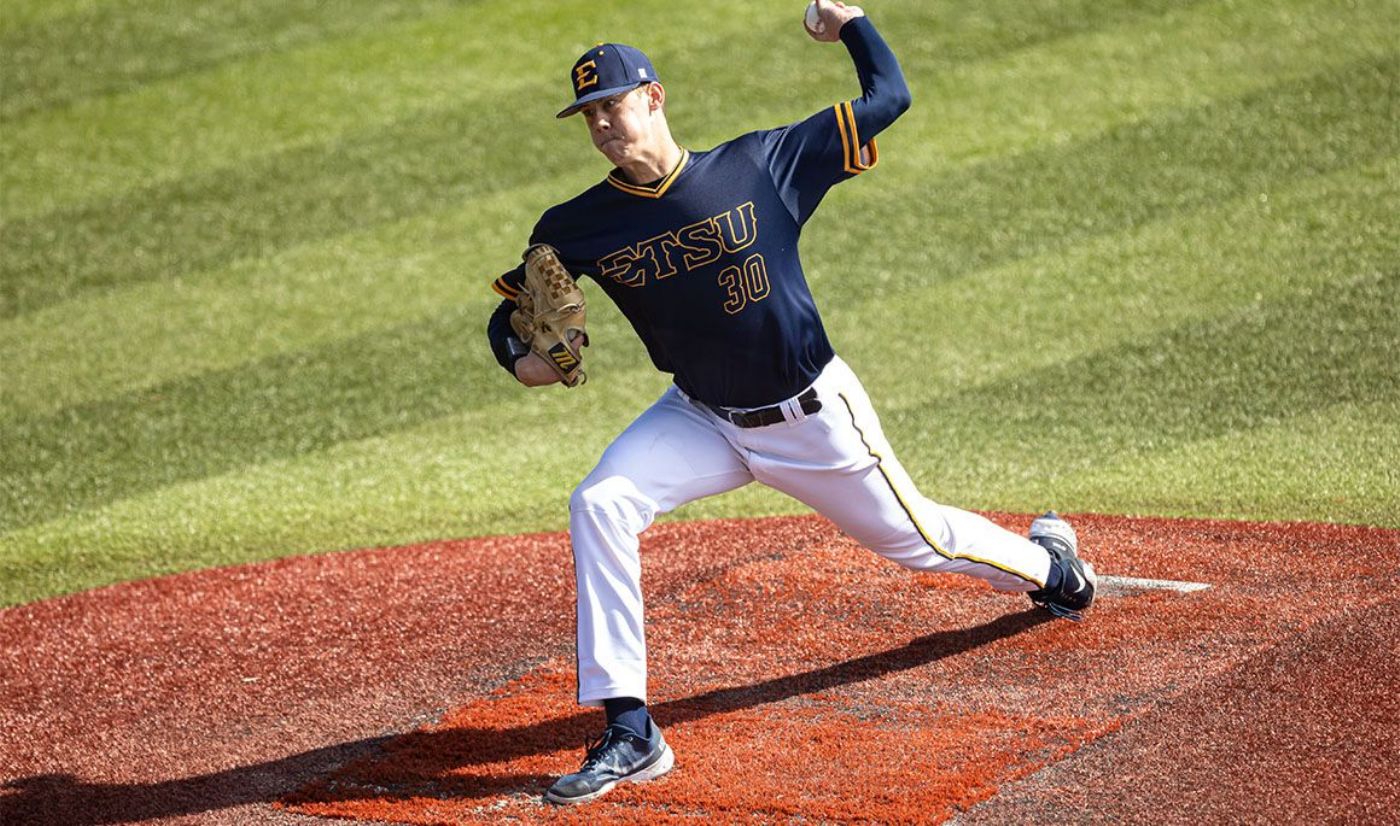 GREENSBORO, N.C. (April 3, 2021) — It its final game of the opening round of division play, the ETSU Baseball Team picked up a crucial doubleheader sweep over the UNCG Spartans. With strong starting pitching, the Bucs limited the Spartans to just four runs in the two games. ETSU took game one 4-1 and clinched the series with a 6-3 win in game two.

How it happened:
GAME ONE: ETSU 4, UNCG 1
The game was scoreless until David Beam (Knoxville, Tenn.) started the scoring off for ETSU with a sacrifice fly in the top of the fourth, scoring Kyle Richardson (Zionsville, Ind.).

The Blue and Gold tacked on their final three runs of the game in the sixth, all with two outs. Noah Webb (Kodak, Tenn.), Drew Haynie (Brentwood, Tenn.) and Beam all scored on singles from Sean Kearney (Powell, Tenn.) and Reese Farmer (Winterville, N.C.).

Colby Stuart (Elon, N.C.) was lights out on the mound. The starter for the Blue and Gold tossed eight shutout innings, allowing three hits and tallied seven strikeouts. The Elon, N.C. native walked three and allowed just one Spartan runner to reach third base.

Seth Chavez (Pinetop, Ariz.) relieved Stuart in the ninth with ETSU up 4-0. He struck out one and allowed one run. With a runner on third, Joseph Acosta (Vineland, N.J.) came in for the save up three. Acosta retired the next two batters to give ETSU the 4-1 victory in game one.

Stat of the Game
The bottom half of the Buccaneers lineup combined for five of the team’s seven hits and drove in all four of ETSU’s runs.

Notables
» Farmer matched his season high set on March 5 with two hits in the game. The Bucs’ nine-hole hitter drove in two of ETSU’s four runs, his first two RBI this season.
» The heart of ETSU’s lineup, Richardson, Webb and Beam all recorded a hit.
» In his first start since March 6, Haynie went 1-for-4 at the plate. Kearney recorded a hit and an RBI.
» Ethan Cady (Soddy Daisy, Tenn.) and Ashton King (Knoxville, Tenn.) both extended their respective on-base streaks to 25 and 16 games with a walk.
» Stuart’s start was the best of his career. It was his first eight-inning outing as a Buccaneer in three seasons in Johnson City.

GAME TWO: ETSU 6, UNCG 3
For the first time in the series, UNCG got on the board first. The Spartans plated three in the first inning. The first two runs scored after an ETSU throwing error on a fielder’s choice. The final run of the frame crossed on an RBI single to left.

Down 3-0, the Bucs lived up to the challenge. In the second inning, Kearney came through with a 2-RBI double to left center. Kearney came around to score on King’s two-out single.

With the game tied at three in the fourth inning, Cady notched his first base hit of the afternoon. A huge two-out double to the opposite field scored Haynie to give ETSU its first lead of the game. The Blue and Gold extended their lead in the sixth, driving in two unearned runs.

After a strong outing by Stuart in game one, Nathanial Tate (Manchester, Tenn.) followed it up with another dominant performance by a Buccaneer pitcher. Tate allowed three runs in seven innings of work. He struck out six and walked three enroute to his third straight win.

Matthew Bollenbacher (Powder Spring, Ga.) entered the game in the seventh for a six-out save. The strong reliever tossed two shutout innings, struck out three and allowed just one hit.

Stat of the Game
This was the first time this season the Bucs and their opponent tallied the same number of hits. ETSU outhit the Spartans in the first two games of the series.

Notables
» Kearney went 2-for-3 at the dish with two RBI. His two hits in a game tie a career-high now achieved eight times.
» After the bottom of the lineup recorded the majority of hits in game one, the first four hitters in ETSU’s lineup all recorded a hit. The 5-9 players in the lineup scored all of the runs for the Bucs.
» Tate pitched his third consecutive quality start. After allowing two hits in the first inning, he allowed just two in the final six innings he threw.
» Bollenbacher delivered his fifth shutout appearance this season. In 15.1 innings of work, he’s allowed just two earned runs.
» The series victory is the first for the Bucs over the Spartans since ETSU rejoined the SoCon in 2014.
» Entering the series, UNCG averaged nine hits per game this season. The Blue and Gold held the hosts to 5.6 hits per game this weekend.
» Cady has reached base safely in all 26 games to start the season.

Up next
The Bucs are back at home on Tuesday, April 5 to take on the visiting Virginia Tech Hokies at Thomas Stadium. First pitch is slated for 5 p.m.