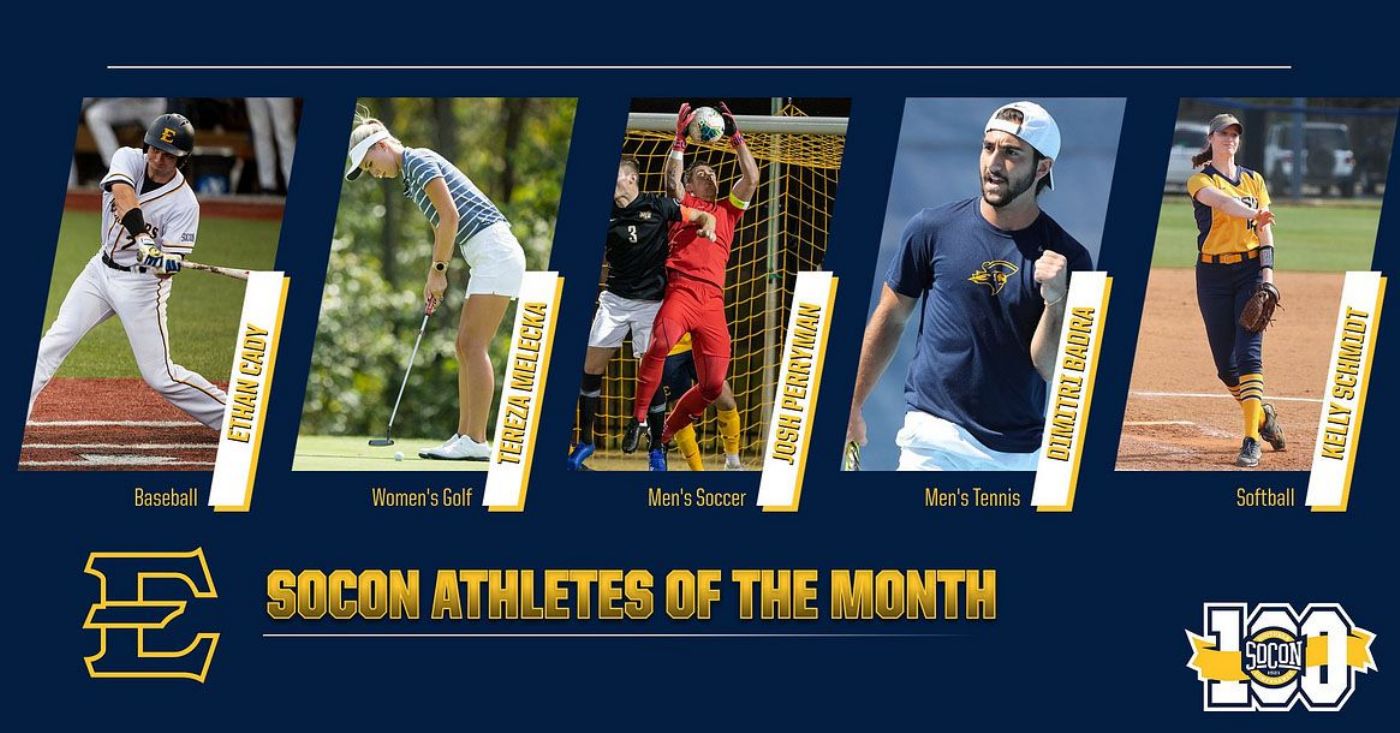 BASEBALL – ETHAN CADY
Cady recorded a base hit in all 16 games played in the month, hitting .377 in the span with a .472 on-base percentage and .902 slugging percentage. Cady led the team with nine home runs, 26 RBI and 23 hits in March. 14 of his 23 hits were extra-base hits. Early in the month, Cady hit a home run in three-straight games, becoming the first Buc to hit a home run in three straight games since Hagen Owenby from April 29 – May 1, 2016 vs VMI. The starting right fielder for ETSU recorded a multi-homerun game and two games with six RBI.

WOMEN’S GOLF – TEREZA MELECKA
Melecka posted three top-five finishes, including medalist honors at the Chattanooga Classic on March 30 – her fourth career collegiate win. She had a scoring average of 71.8, while totaling eight rounds of par or lower in the 11 total rounds played in the month of March. The Czech Republic native finished fourth in the River Landing Classic, tied for third in the Pinetree Women’s Collegiate and won the Chattanooga Classic. In her three full tournaments played in the month of March, Melecka generated a 70.8 scoring average, including a 69.3 mark at the River Landing Classic where she placed fourth overall. In her win at Chattanooga, Melecka led wire-to-wire and led the field in birdies (13), par-4 scoring  (4.03) and par-5 scoring (4.67).

MEN’S SOCCER – JOSH PERRYMAN
Perryman moved to 11 clean sheets in his career in the month of March, becoming only the third Buccaneer in program history to record double-digit career shutouts. The redshirt junior recorded a career-tying eight saves in the 1-0 shutout over Mercer, tying his earlier season record set against Marshall to give ETSU their first of three wins in four opportunities as the Bucs closed the month on a four-game unbeaten streak. One of the four goals was scored off a deflection from a Buccaneer defender in the 3-2 win against Wofford. His .840 save percentage in March would rank first all-time in program history in save percentage if he kept at the pace all season.

SOFTBALL – KELLY SCHMIDT
Schmidt looked like a Softball Cy Young candidate, if there ever was one. The senior righty posted a 5-1 record, responsible for more than half of the Buccaneers’ wins this month. Schmidt posted a 1.27 ERA in her eight games played this month, throwing 49.2 innings of work and allowing just nine earned runs. The Georgia product struck out 38 batters in the process, while allowing 33 hits during the month. Schmidt earned a critical win in the finale of the month, defeating UNCG 7-2 to salvage one game from the three-game series. Schmidt faced 204 batters during the month, holding opponents to a .162 batting average.

MEN’S TENNIS – DIMITRI BADRA
Badra put together another dominating month for the Bucs, finishing 5-2 in singles play and 6-1 in doubles action. Badra did all his damage in singles from the No. 1 spot, aiding ETSU to a 6-1 record as a team. After dropping his first singles match of the month, Badra rattled off four consecutive wins, before splitting his final two matches. The redshirt-sophomore paired up with Miguel Este to finish 6-1 in doubles play, all from the No. 3 position. The Venezuela native has caught the attention of the ITA, sliding in at No. 57 last week in the Top 125 rankings.