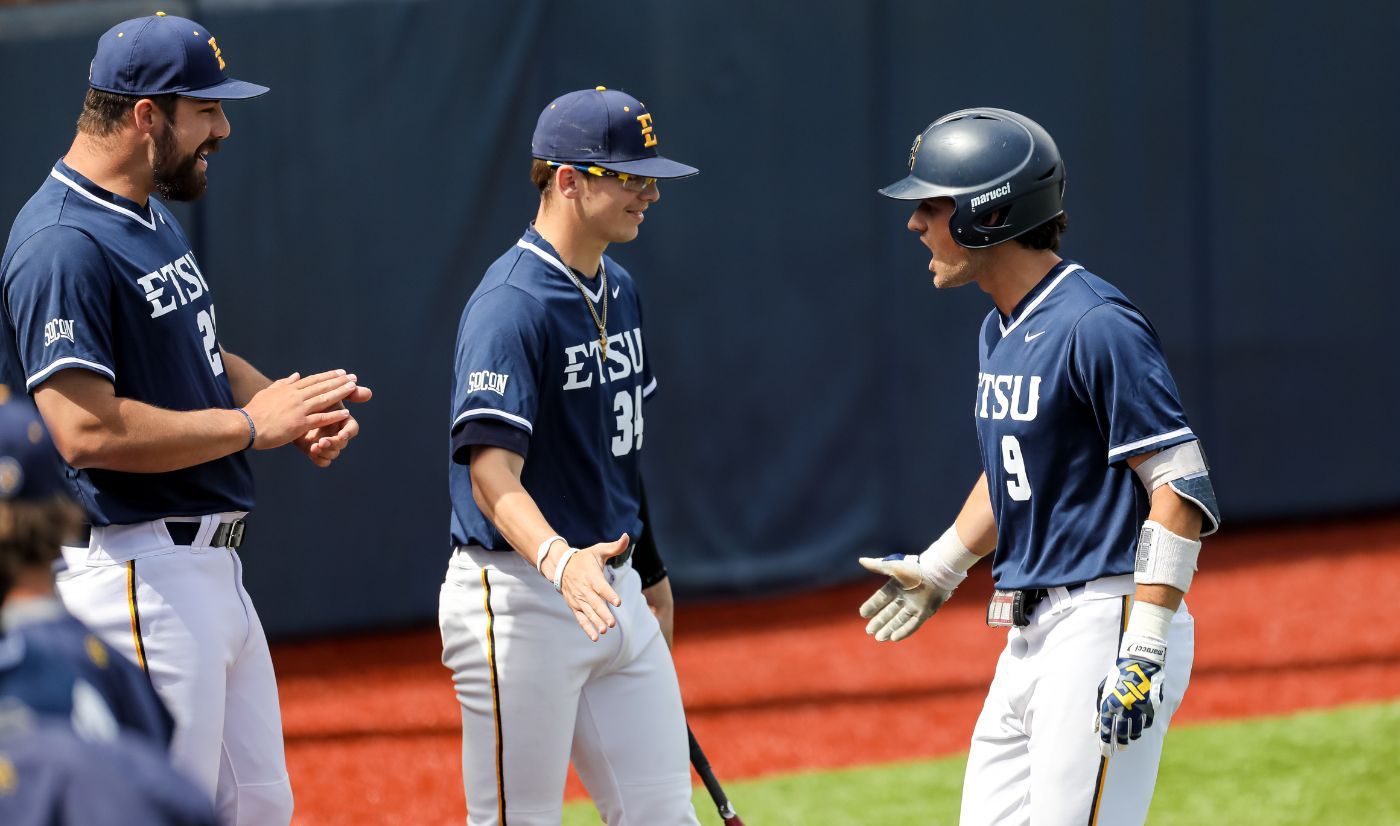 JOHNSON CITY, TENN. (April 11, 2021) — The ETSU Baseball Team and the Wofford Terriers put together 49 hits and 31 runs in Sunday’s doubleheader at Thomas Stadium. The Bucs took game one 7-4 before falling in game two 11-9. The Blue and Gold hit eight home runs in the two games including going back-to-back three times.

How it happened:
GAME ONE: ETSU 7, WOFFORD 4
Unlike yesterday’s game, both teams entered the hit column in the first inning. After an Ashton King (Knoxville, Tenn.) leadoff double and an Ethan Cady (Soddy Daisy, Tenn.) walk, David Beam (Knoxville, Tenn.) delivered a one-out RBI double to clear the bases and put the Bucs up 2-0.

Wofford tied the game in the next half inning, plating two unearned runs on ETSU’s first error of the contest.

In the third, ETSU’s bats erupted as they blasted three home runs out of Thomas Stadium. The three-run third began with a leadoff home run from Noah Webb, his second of the season. With two outs, Bryce Hodge (Knoxville, Tenn.) and Justin Hanvey (Purcellville, Va.) went back-to-back. It was Hanvey’s first career home run and the second time this season the Blue and Gold have hit back-to-back.

The Terriers didn’t let ETSU’s two-run lead last long. The visitor’s plated a run in the fourth off a Buccaneer error. In the fourth, Wofford’s Matty Brown hit his first homer of the season on the first pitch of the inning to cut the visitor’s deficit in half.

ETSU added two insurance runs in the bottom of the eighth on a screaming line drive off over the wall in left off the bat of Jake Lyle (Spring Hill, Tenn.). His third long ball of the season plated Markell Graham (Atlanta, Ga.), who entered the game as a pinch runner.

Stat of the Game
The four home runs are the most for the Blue and Gold this season and the most since ETSU set a program record with seven long balls last season on March 1 vs Georgia State.

Notables
» It was Hanvey’s first homer of the season, while Hodge and Webb both hit their second out of the park. Of the four Bucs with homers in game one, Lyle leads the contingent with three this season.
» Sean Kearney (Powell, Tenn.) and King led the Bucs with two hits each.
» Stuart recorded his second straight quality start. He tossed seven innings, allowed four runs, three earned and struck out seven. The south paw didn’t walk a batter and picked up his third win of the season.
» Bollenbacher entered for his second-straight six-out save. In two innings of work, he shutout the Terries and allowed one hit on just 15 pitches.
» Eight of the nine batters in ETSU’s starting lineup recorded a hit.

How it happened:
GAME TWO: WOFFORD 11, ETSU 9
ETSU’s hot bats continued in game two with two home runs in the opening frame. Webb hit his second home run of the afternoon with two outs in the inning and on the next pitch, Beam went yard as the Blue and Gold went back-to-back in their second-straight game. Lyle continued the two-out rally, with an RBI double off the wall in left to plate Kearney.

The Terriers did not let the lead last long. The visitors plated three in the top of the second on five singles and a walk to tie the game.

The game was tied at three until the fourth, where the Terriers plated four runs in consecutive innings to take an 11-3 lead. Wofford used 11 hits in the fourth and fifth inning to take its largest lead of the series.

Down eight runs in the fifth, ETSU wasn’t ready to give up. The Blue and Gold hit back-to-back home runs for the third time in the doubleheader. This time, it was Hodge starting the production with a three-run bomb over the left center wall. In the next at-bat, Lyle went yard for the second straight game as well, this time a two-run shot to bring the Bucs within three.

ETSU added a run in the eighth to cut its deficit to two with a sac fly. That’s the closest ETSU got as Wofford retired the hosts in order in the ninth.

Stat of the Game
The Bucs and the Terriers combined for 20 runs and 31 hits.

Notables
» Hodge and Webb had just one home run on the season entering the doubleheader.
» Like they did in game one, eight of ETSU’s nine batters recorded a hit.
» Both starting pitchers did not get out of the fourth inning with ETSU’s Tate going 3.2 innings and allowing 5 ER and struck out four. Wofford’s Elliot Carney pitched three innings of five hit ball. He allowed three earned runs and struck out five/
» This marks the 11th time in program history the Terriers have recorded 21 hits or more in a game in program history.
» Nolen Hester, Colin Davis and Jack Renwick all recorded four hits for Wofford.

Up next
The Bucs are back in action next weekend at The Citadel in Charleston, S.C. First pitch on Friday is slated for 5 p.m.