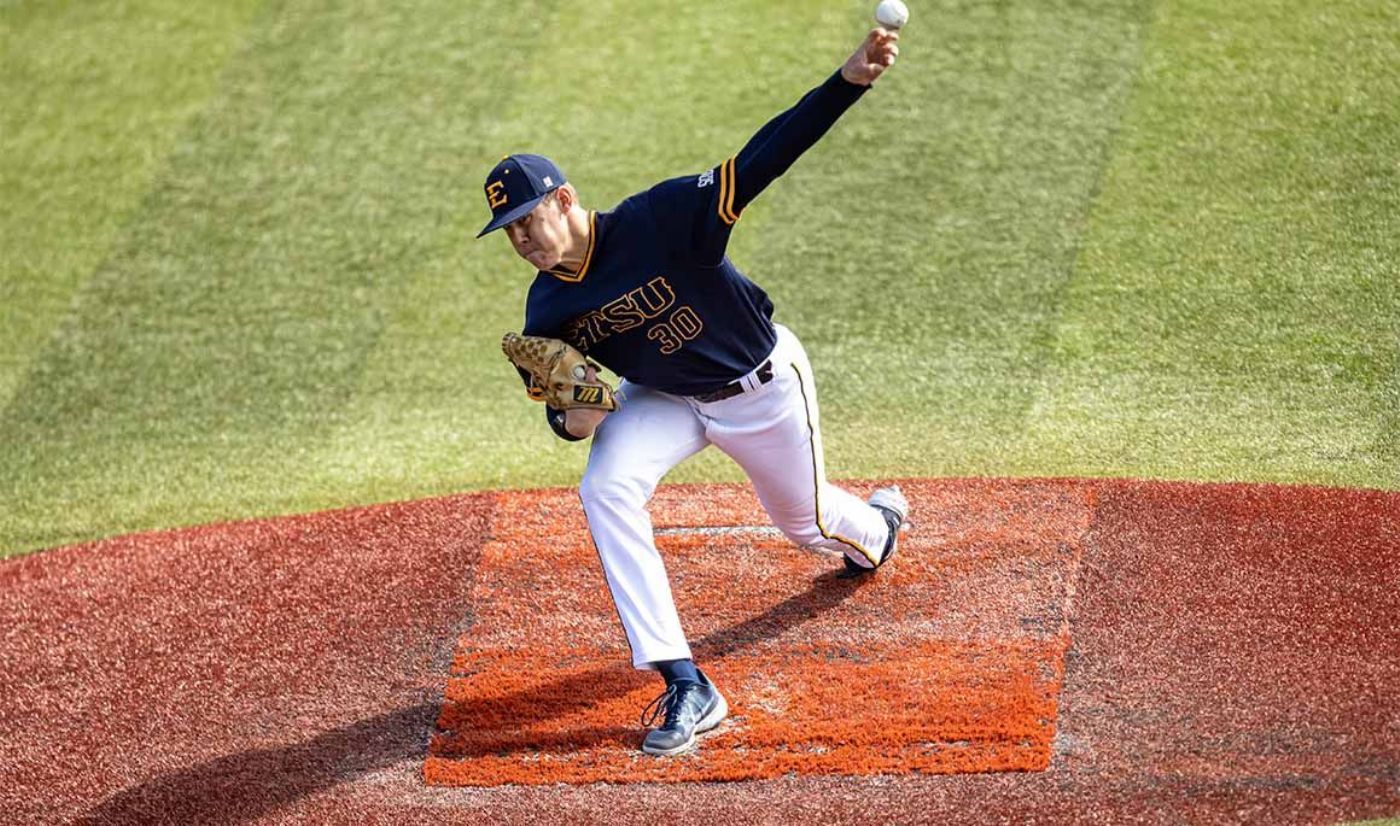 CHARLESTON, S.C. (April 17, 2021) — After dropping game one yesterday, the ETSU Baseball Team forced a rubber match with The Citadel after winning game one of Saturday’s doubleheader, 7-2. With game two tied at four, the Bulldogs plated two runs in the eighth to take a 6-4 lead and ultimately take the series.

How it happened:
GAME ONE: ETSU 7, THE CITADEL 2
Like they did yesterday, the Blue and Gold got on the board first, plating two in the opening frame and one in the second. The Bucs got the scoring started with a Bryce Hodge (Knoxville, Tenn.) RBI double and an RBI single from JL Bland (Memphis, Tenn.). ETSU added to its lead in the second with a one-out RBI grounder from Ashton King (Knoxville, Tenn.).

The Blue and Gold continued the offensive production in the fifth as Hodge drove in his second run of the game with an RBI single up the middle. Jackson Green (Blackwood, N.J.) tallied his second RBI of the season in the fifth to give ETSU a five-run edge, scoring Jake Lyle (Spring Hill, Tenn.) from first.

ETSU scored its final runs of the game in the seventh off of Hodge’s fourth home run of the season, a two-run shot to right.

Stat of the Game
Hodge became the third Buccaneer this season with a four-RBI game. Ethan Cady (Soddy Daisy, Tenn.) has two and King has one.

Notables
» Hodge set a career high with four RBI, three hits and hit his fourth home run of the season. Green also tallied three hits, a career best for the starting left fielder.
» Making his first start since April 2, Bland went 1-for-3.
» Seven of the starting nine for ETSU recorded a hit.
» ETSU’s four strikeouts at the plate marked a season low.
» Colby Stuart (Elon, N.C.) got the nod for the Blue and Gold and the win, tossing six scoreless innings and striking out four.

How it happened:
GAME TWO: THE CITADEL 6, ETSU 4
As the Bucs have done throughout the entire series, the visitors took the lead first, this time with a Lyle single through the right side.

After The Citadel tied the game in the fourth with a sac fly, ETSU regained the lead with two runs in the sixth. Bland and Sean Kearney (Powell, Tenn.) both drove in runs for the Blue and Gold to give them a 3-2 advantage.

The hosts hit back-to-back two-out home runs to take their first lead of the doubleheader. Cole Simpson hit a two-run bomb before Ben Hutchins gave the Bulldogs with a solo shot.

ETSU tied the game with a David Beam (Knoxville, Tenn.) RBI single, but that would be the closest they’d get. The Citadel took the lead in the bottom of the eighth with a two-out two-run RBI single. The Bucs went three up, three down in the top of the ninth to end the game and the series.

Stat of the Game
The two teams turned six double plays, three each.

Notables
» King, Kearney and Farmer all had multi-hit games.
» Lyle, Green and Beam tallied the other three base-knocks for ETSU.
» Nathanial Tate (Manchester, Tenn.) got the start for the Bucs and the no decision. The allowed four runs on eight hits and struck out six.
» The Citadel’s Crosby Jones had a game high three hits.

Up next
The Bucs are back at Thomas Stadium this weekend to host the Western Carolina Catamounts with a three-game series beginning Friday, April 16 at 5 p.m.