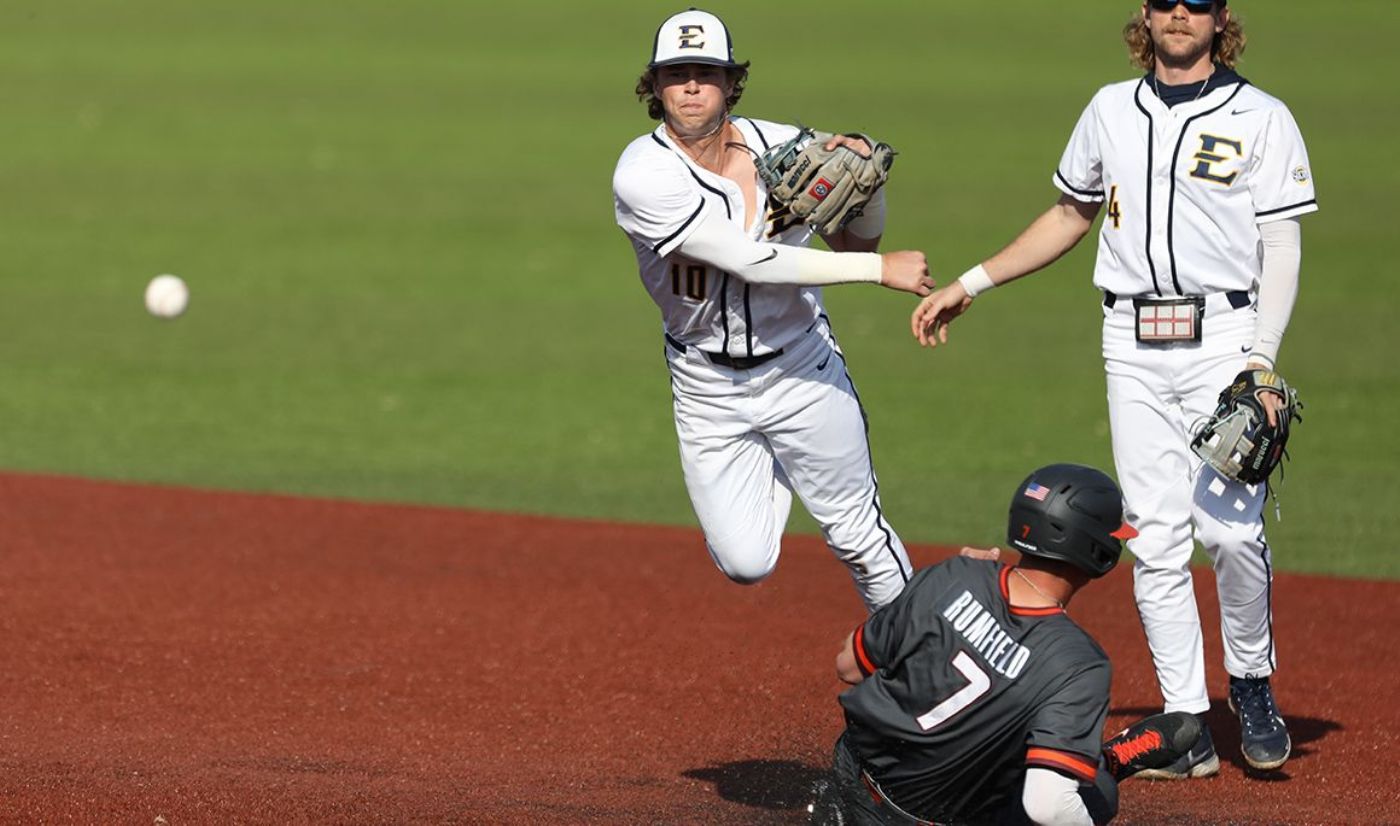 MACON, Ga. (April 29, 2021) — The ETSU Baseball Team continues Southern Conference play this weekend as the Blue and Gold travel to Macon, Ga. to face the Mercer Bears. The series begins with a single game Friday at 6 p.m. followed by a 2 p.m. doubleheader on Saturday.

ETSU’S LAST SOCON SERIES
Last weekend, the Blue and Gold split a Friday doubleheader with the Western Carolina Catamounts. The series finale on Saturday was cancelled due to weather. In game one, ETSU was shutout for the first time this season after WCU's Matthew's went the distance. The Catamounts defeated ETSU in the opener, 3-0 after plating the game's only three runs in the sixth inning. The Bucs' bats came alive in game two as ETSU took the contest, 7-1 behind home runs from Noah Webb (Kodak, Tenn.) and David Beam (Knoxville, Tenn.). Colby Stuart (Elon, N.C.) went eight innings, allowing just one run on six hits and struck out seven.

SOCON STANDINGS UPDATE
This season, the SoCon split its eight teams into two divisions. ETSU is second in the Blue division with an 8-9 record in league play. Samford leads the division and the conference with a 13-5 record in SoCon action. The Bulldogs face Wofford (12-6) this weekend. Western Carolina leads the Red division with a .692 winning percentage and a 9-4 record. The Catamounts are less than a game ahead of Wofford who is tied with Mercer for second in the division with a .667 winning percentage. The two division winners will qualify for the conference tournament at the end of the season. The two teams with the next two best records/winning percentage after that will also qualify (regardless of division).

SCOUTING MERCER
The Bears are on a three-game win streak after defeating Kennesaw State yesterday and winning the last two games of the series last weekend at Samford. Mercer is 24-16 this season and is 10-5 in league action. In its friendly confines of OrthoGeorgia Park, the bears are 15-6 and have lost just one conference game at home. The bears are led at the plate by Bill Knight who is hitting .325 and has started in every game this season. He leads the squad with 12 doubles and is tied for a team-best with 37 RBI. Garett Delano (.322) and Collin Price (.320) are also both hitting above .300 this season. Mercer’s Brandon Michie and Angelo DiSpigna are tied with Ethan Cady (Soddy Daisy, Tenn.) for the league lead in home runs with 10. The Bears’ pitching staff is fifth in the SoCon with a 5.18 ERA and has allowed the fewest amount of doubles (44) this season.