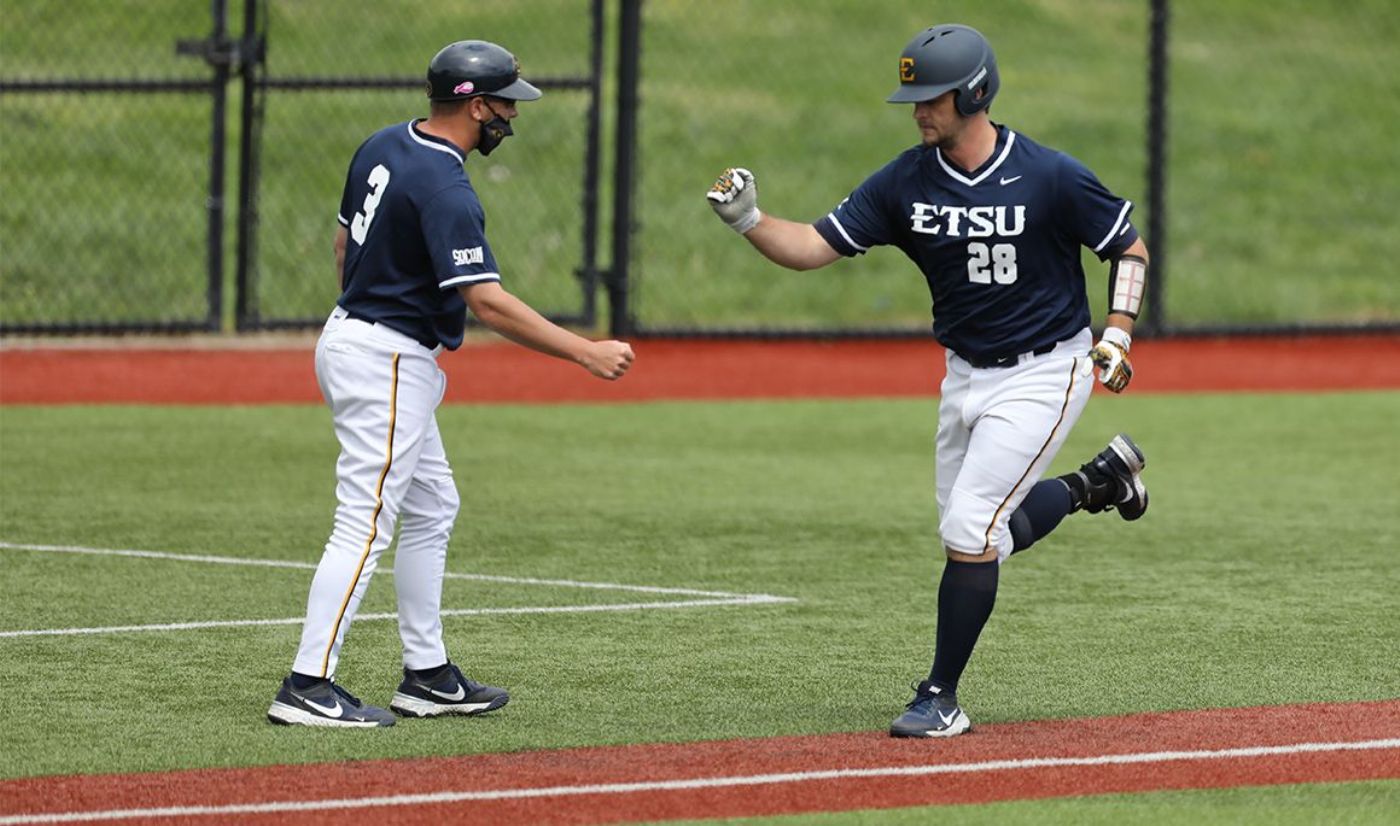 MACON, Ga. (May 1, 2021) — The final three innings proved to be the most exciting at OrthoGeorgia Park on Saturday afternoon in a doubleheader between the ETSU Baseball Team and the Mercer Bears. In game one, a three-run home run in the ninth gave ETSU a 7-6 victory, while the Bears plated eight runs in their final two at bats in the series finale to give them an 8-4 series-clinching win.

How it happened:
GAME ONE: ETSU 7, MERCER 6
Like they did yesterday in the series opener, the Bucs got on the board first. The Blue and Gold entered the run column as David Beam (Knoxville, Tenn.) scored on a wild pitch with Reese Farmer (Winterville, N.C.) at the plate in the second inning.

In the next inning, the Buccaneer bats found some power. ETSU’s home run leader added to his total in his second at bat of the game. Ethan Cady (Soddy Daisy, Tenn.) put the first pitch of the third inning over the right center field wall to double ETSU’s lead. Two batters later, Noah Webb (Kodak, Tenn.) jumped in on the home run party. Webb hit ETSU’s second homer of the inning, his third of the season, giving the Bucs a 3-0 advantage.

The Bears got on the board in the bottom of the third as Garrett Delano doubled down the left field line with two outs to plate Bill Knight. Mercer scored the next three runs on one swing. Anthony DiSpigna hit the Bears’ first homer of the game, a three-run blast over the right field wall, giving Mercer its first lead of the afternoon.

Mercer doubled its lead in the seventh, bringing the score to 5-3. In the next half inning, Jackson Green (Blackwood, N.J.) went yard for the second time in the series to put the Bucs back within a run.

Down 4-3 with two on and no one out, Bryce Hodge stepped up to the dish. Hodge drove one over the fence in right to give the Bucs a 7-5 lead heading into the bottom of the ninth. Matthew Bollenbacher (Powder Springs, Ga.) came into close out the game. He allowed one run on three hits en route to picking up his fifth save of the season.

Zach Kirby (Upland, Calif.) entered the game as ETSU’s first relief pitcher in the seventh and allowed one run without a hit in two innings of work, picking up the win.

Stat of the Game
This marked ETSU’s first win when trailing after the eighth inning. They were previously 0-14.

Notables
» ETSU’s two home runs in the third mark the seventh time this season the Blue and Gold have hit two homers in the same inning.
» Green’s home run yesterday was the first of his career. He becomes the first Buccaneer this season to hit their first and second homers of the season in back-to-back games.
» This is the third time this season the Blue and Gold hit four home runs in a game (twice vs. Wofford).
» Hodge’s go-ahead home run in the ninth was the first ninth-inning home run for the Bucs this season. It was just the second three-run bomb that came in the seventh inning or later for ETSU.
» Cady’s homer in the third ended a 0-for-19 skid at the plate for the Soddy Daisy native.
» The contest marked the first time since May 6, 2015 that Mercer blew a ninth-inning lead at home. Six years ago, Georgia Tech scored five in the final frame which led them to a 9-7 victory in Macon over the Bears.
» ETSU outhit Mercer, 13-9. Cady, Green, King and Jake Lyle (Spring Hill, Tenn.) all tallied multi-hit games.
» Eight of the nine Buccaneers in the starting lineup recorded a hit.
» Colby Stuart (Elon, N.C.) allowed four runs over six innings of work with five strikeouts and picked up a no decision.

GAME TWO: MERCER 8, ETSU 4
For the third time in the series, ETSU struck first. This time it was a Hodge double which scored King. In the next at bat, Webb drove in Cady with a sacrifice fly to give the Bucs a two-run lead.

In the fifth, the Blue and Gold plated two more on a Webb double and a Sean Kearney (Powell, Tenn.) RBI single.

Nathanial Tate (Manchester, Tenn.) held Mercer scoreless through the first 6.1 innings of work. The Bears’ third hit of the game was a three-run blast which brought the hosts within one, 4-3. Seth Chavez (Pinetop, Ariz.) entered the game in relief and got out of the inning.

The Blue and Gold took a 4-3 lead into the bottom of the eighth. Chavez got the first batter out and then struck out the next, but he reached first base on a wild pitch. After back-to-back singles, Mercer tied the game and had the leading run thrown out at the plate on a relay from Ben Jackson (Guyton, Ga.) in center. Chavez walked the next two batters which led Matthew Mercer (Chattanooga, Tenn.) to enter the game with the bases loaded and two outs. Mercer’s Brandon Michie hit a 1-2 pitch back up the middle to drive in two and give the Bears their first lead of the game. The hosts plated two more to take an 8-4 lead into the ninth.

The Bucs were able to get two runners on, but didn’t get any across as they fell in the series finale.

Stat of the Game
This marked the first series this season for ETSU in which all three games featured ten or more runs.

Notables
» Tate did not allow a hit until there were two outs in the bottom of the fourth. He went 6.1 innings, allowed three runs on three hits and struck out eight batters.
» Seven of the nine Bucs in the starting lineup recorded a hit, led by Sean Kearney with three. Hodge, Beam and Lyle recorded two hits in the contest.
» The Bucs are now 0-11 when their opponent hits more home runs than they do. Additionally, the Bucs are 3-13 when not hitting a home run.
» The eight runs in the final three innings are the most the Bucs have allowed in a come-from-behind win since Mercer scored seven against the Blue and Gold on March 31, 2018.
» ETSU and Mercer combined to leave 23 runners on base.

Up next
The Bucs are back at Thomas Stadium to begin its second round of division play on Friday at 5 p.m. vs UNCG.