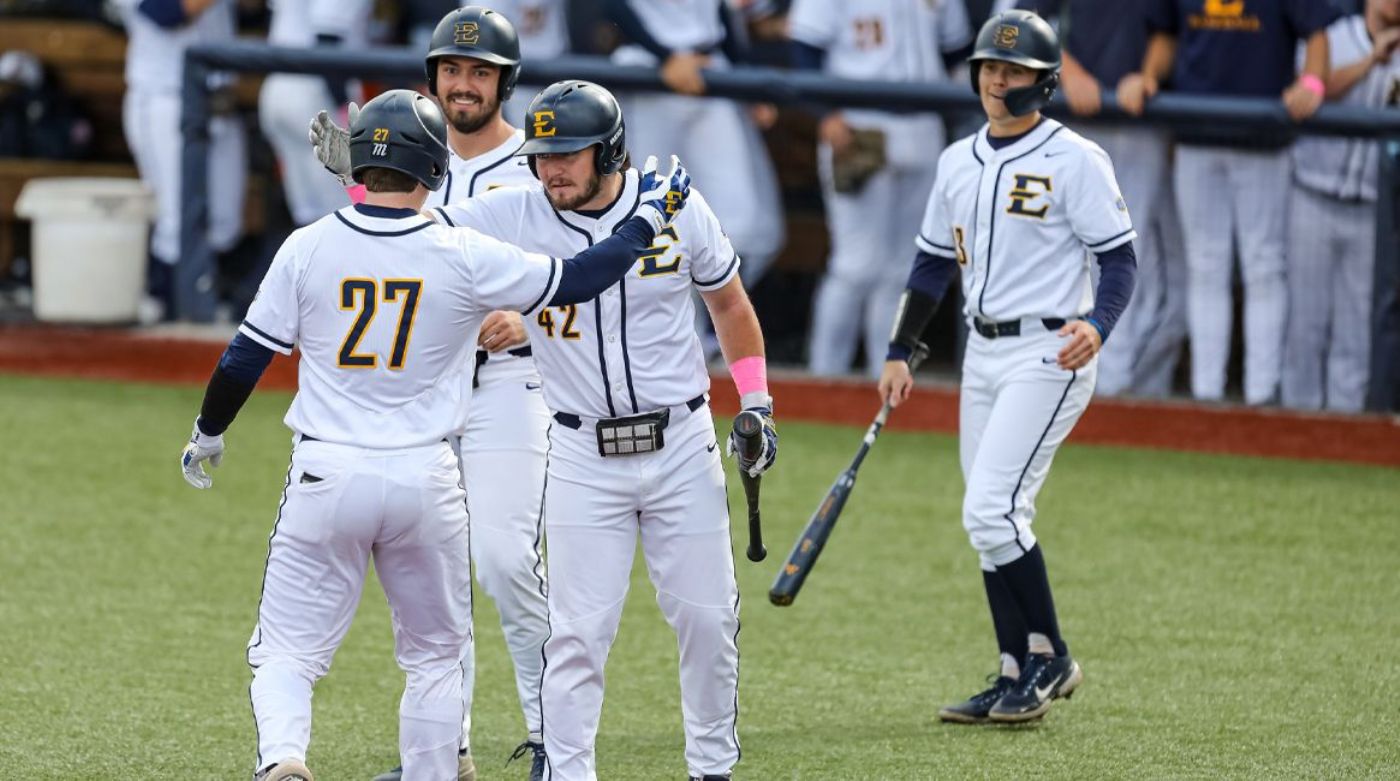 JOHNSON CITY, Tenn. (May 7, 2021) — The ETSU baseball team wasted no time in Friday’s series opener against the Spartans, scoring four runs in the first inning on their way to a 5-1 victory over the UNCG Spartans in SoCon play.

How it happened:
With only two batters needed in the bottom of the first, the Bucs grabbed the opening lead of the game. After an Ashton King (Knoxville, Tenn.) leadoff triple on his first pitch seen, Ethan Cady (Soddy Daisy, Tenn.) brought him around with a hard shot through the right side of the infield. With two men on and two outs, Kyle Richardson (Zionsville, Ind.) increased the lead to 4-0 after blasting a 2-0 pitch to deep center field, clearing 400ft wall.

The Blue and Gold added a fifth run in the second inning. After a deep shot from Bryce Hodge (Knoxville, Tenn.) with bases loaded was fielded just shy of the wall, Jake Lyle (Spring Hill, Tenn.) coasted across home plate with the sacrifice fly.

The Spartans responded by getting on the board for the first time in the top of the fourth. Hunter Loyd (Knoxville, Tenn.) gave up his first hit of the day on the leadoff, working his way around the leadoff runner to allow just one unearned run on the inning.

After seven innings of work allowing just two hits on seven strikeouts, Loyd’s number was called by head coach Joe Pennucci. Handing the ball off to Zach Kirby (Upland, Calif.), the sophomore struck out four of the next eight batters, allowing just one hit in the last two innings of work as the Bucs took the first game of the series 5-1.

Stat of the Game
The Bucs did all the damage necessary in the first frame, totaling eight bases while bringing home four runs in the opening inning. The Bucs and Spartans combined for just 10 total bases the rest of the game.

Notables
» King’s leadoff triple proved just the second of the season for the Blue and Gold, joining Cady as the only other Buc to record the feat.
» The home run in the first marked Richardson’s fourth home run and first 3-RBI game this season, one short of his career-high. Richardson recorded a 4-RBI game in the 2019 season against Iona (Feb. 17).
» In Loyd’s start for ETSU, the sophomore finished with no earned runs and allowed just two hits in seven innings of action, striking out seven.
» UNCG finished with just the lone run in their second consecutive game, scoring 47 in the four games prior.
» ETSU held the Spartans to 0-16 with runners on base, 0-8 when runners were in scoring position.

Up next
The Bucs and Spartans conclude their series on Saturday afternoon as ETSU honors its 15 seniors prior to the first pitch of the opening game of the doubleheader. First pitch is set for 1 p.m.