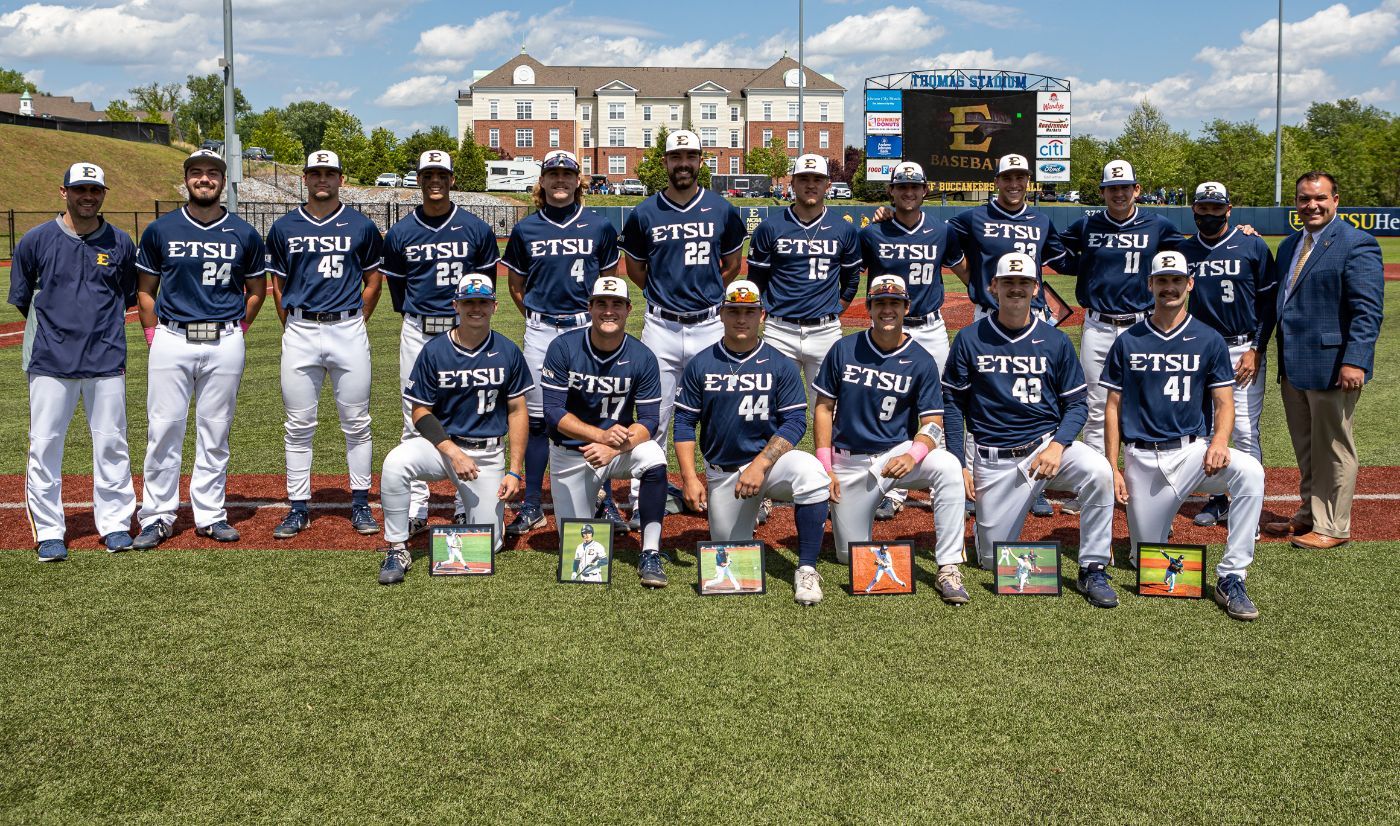 JOHNSON CITY, Tenn. (May 8, 2021) — The ETSU Baseball Team and the UNCG Spartans were set to conclude their three-game series on Saturday at Thomas Stadium with a doubleheader beginning at 1:15 p.m. Due to COVID-19 protocols, game one of the twin bill began at 3:15 p.m. UNCG took game one of the doubleheader, 13-5, in seven innings. The Spartans controlled the rubber match, plating six runs in the first two innings en route to taking the series finale, 9-6.

How it happened:
GAME ONE: UNCG 13, ETSU 5 (7 inn.)
UNCG got on the board first in the second inning, taking its first lead of the series. The Spartans used a deep fly ball to put Spencer Smith in scoring position after a leadoff walk. Smith later scored on a two-out RBI single off the bat of Robbie O’Neal through the left side to take a 1-0 lead.

The Spartans doubled its lead in the third with runners on the corners and two outs. On an 0-2 pitch, UNCG’s runner on first stole second and Hogan Windish scored from third on the throw. The Spartans added another in the fourth inning with another O’Neal RBI single. UNCG’s scoring in consecutive innings didn’t stop in the fourth as the Spartans plated two in the fifth on three doubles.

ETSU began its run production in the bottom of the fifth. With runners on the corners and no one out, Jake Lyle (Spring Hill, Tenn.) drove in ETSU’s first run of the contest with a double to right center. In the next at bat, Kyle Richardson came in to pinch hit and plated Lyle and Jackson Green (Blackwood, N.J.) to cut ETSU’s deficit to two. With the bases loaded and one out, Sean Kearney (Powell, Tenn.) tied the game at five with a two-run single up the middle.

In the sixth, the Spartans’ leadoff man reached on a dropped fly ball and later advanced to third on a flyout to right field. After ETSU intentionally walked UNCG’s leadoff batter, Greg Hardison drove in two runs with a two-out single up the middle to give the visitors a 7-5 lead.

UNCG added a plethora of insurance runs in the top of the seventh, plating six runs on five hits and batting around. The Spartans retired the Bucs in order in the final frame to take game one of the doubleheader, 13-5.

Stat of the Game
The Spartans plated at least one run in each of the final six innings of the seven-inning affair.

Notables
» Colby Stuart (Elon, N.C.) got the nod for the Blue and Gold in game one. He allowed five earned runs in five innings of work, picking up a no decision. The five earned runs are the most runs allowed by the left hander since he allowed six on March 26 at Samford.
» ETSU’s five-run fifth marked just the second time this season ETSU scored five runs in an inning at home (Wofford).
» Kearney went 2-for-4 with two RBI. Four other Buccaneers recorded a hit in the contest.
» UNCG’s Hardison tallied a game-high four hits and three RBI.
» The Bucs are now 0-13 when their opponent garners 10 or more hits.

GAME TWO: UNCG 9, ETSU 6
UNCG continued its run production in the opening frame of game two. After three straight walks to lead off the game, the Spartans plated their first run as Widish was hit by a pitch with the bases loaded. UNCG scored its next two runs on RBI groundouts and plated the fourth and final run on a base hit up the middle.

The Spartans scored in the second to make it nine innings in a row that they put a run on the board. Through the first two innings, UNCG held a 6-0 lead.

ETSU got on the board in the third as Ethan Cady (Soddy Daisy, Tenn.) drove in Jackson Green with a two-out single through the right side.

After UNCG added to its lead in the fourth with a sacrifice fly, ETSU began to cut into the Spartan lead in the fifth. Cady drove in his second run of the game with a double down the left field line, scoring Markell Graham (Atlanta, Ga.) from second. Cady scored on the next at bat, a Kearney RBI single to left. With two outs, the Bucs added a run off of a David Beam (Knoxville, Tenn.) infield single. Kearney scored on a Spartan throwing error and later, the Buccaneer four-run fifth was capped off by a Lyle single.

ETSU cut its deficit in half on another Spartan error. In the bottom of the eighth, Cady hit a high fly ball to left and the left fielder dropped it, allowing Graham to score from third. The Spartans got out of the jam with their second-straight inning-ending double play.

The Spartans used one swing to add two insurance runs in the top of the ninth. Windish continued his damage at the plate, this time hitting the day’s first home run, a two-run blast over the left field wall.

Stat of the Game
The two starting pitchers combined to allow 11 of the games 15 runs in six innings of work.

Notables
» Nathanial Tate (Manchester, Tenn.) started the game on the mound for ETSU. The junior righty allowed six earned runs on two hits in 1.1 innings. He struck out one and walked four while hitting a batter.
» Tucker Rogers (Raleigh, N.C.) entered the game with one out in the second. In 4.2 innings of work, he allowed one run on three hits and struck out a career-high six batters.
» Kearney and Cady both recorded three hits in game two. It is Cady’s fifth three-hit game this season and Kearney’s third.
» In the two games, ETSU combined to score nine runs in the fifth inning. The Bucs scored two runs in the other 13 innings.
» ETSU’s 15 strikeouts are the most for the Bucs in league play this season and tie a season high set in the opener against Northern Kentucky on Feb. 20.

Up next
ETSU concludes its midweek slate on Tuesday, May 11 at Appalachian State. First pitch in Boone, N.C. is slated for 5 p.m.