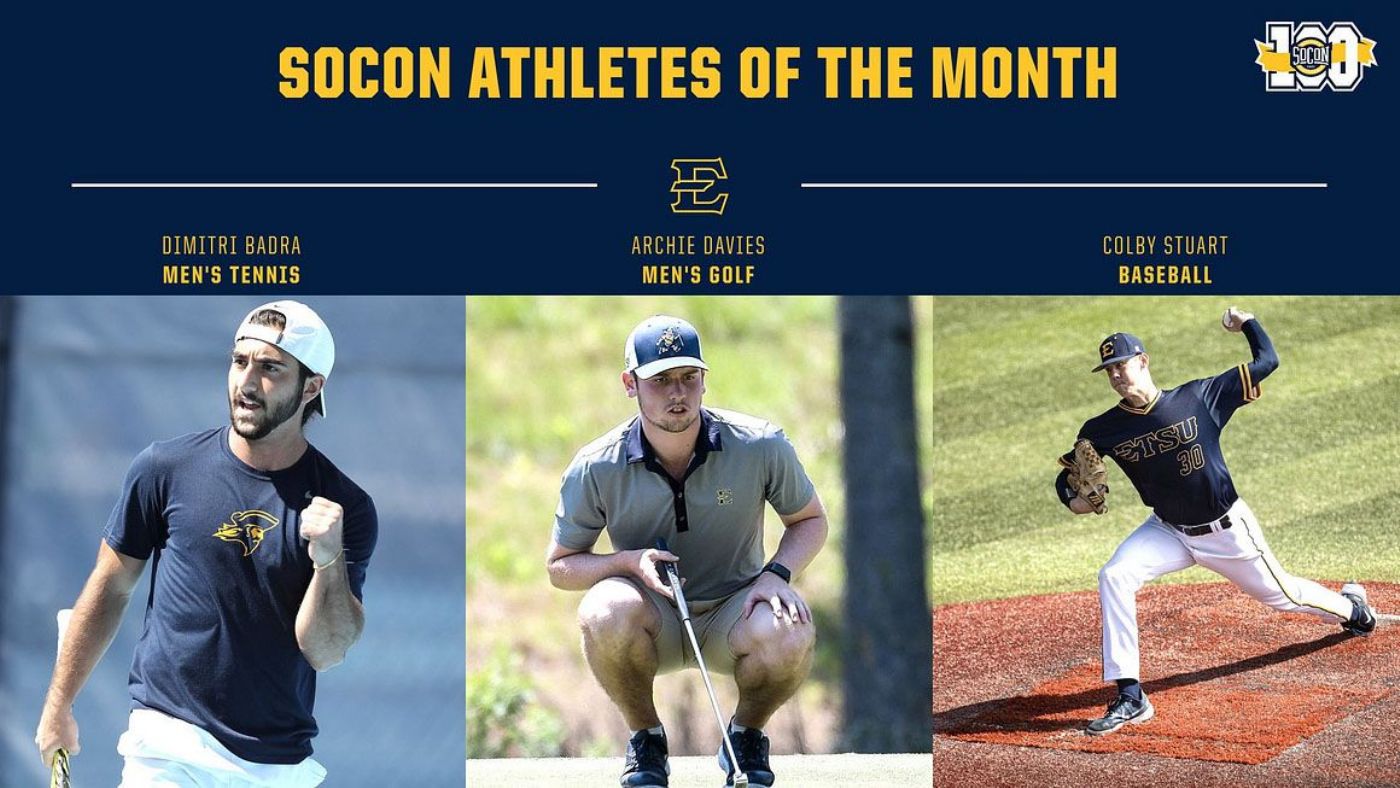 Trio of Buccaneers Earn SoCon Athlete of the Month Honors

JOHNSON CITY, TENN. (May 10, 2021) — The Southern Conference announced its Player of the Month awards for April on Monday afternoon and three Buccaneers received accolades.

MEN’S TENNIS — DIMITRI BADRA
Badra turned in a dominating month on the court, finishing 5-1 in singles play and 6-0 in doubles action. The SoCon Freshman and Player of the Year did not shy away from the top singles slot, falling in just one match in the month of April to soon-to-be Buccaneer, Hugo Lobo. The Venezuela native went toe-to-toe with Georgia's top singles player before the match was called after the Bulldogs clinched the victory in the opening round of the NCAA Tournament. Badra will return to action in the NCAA Singles Championship that will begin on May 23 in Orlando, Fla.

MEN’S GOLF — ARCHIE DAVIES
Davies breezed through the month of April, recording two Top-10 finishes during the month. Davies picked up his first collegiate win, claiming the 2021 Southern Conference Championship as he also paced the Bucs in winning the team championship for the first time since 2017. Davies began the month with a T-7th finish at the Stitch Intercollegiate in Cary, N.C., averaging 68.3 strokes per round. Davies’ efforts enabled the Bucs to record a program record 38-under-par for the event, setting the new 54-hole record for the Bucs. Davies this captured his third consecutive Top-10 finish, claiming the podium at the SoCon Championship in Greensboro, Ga. The England native averaged 69.0 strokes per round, earning SoCon Freshman and Player of the Year in the process. Davies posted par-or-better in all six rounds this month.

BASEBALL — COLBY STUART
Stuart went 4-0 in the month picking up a win in all four of his starts. The Elon, N.C. native began the month with a career-best eight-inning shutout performance at UNCG. He struck out seven and allowed just three hits in ETSU’s 4-1 victory over the Spartans. His next start was a 7-4 victory for ETSU over Wofford in which Stuart went seven innings and allowed four runs, three earned and struck out seven. Stuart went six innings without allowing a run against the Citadel on April 17 before concluding the month against Western Carolina. Going eight innings on the mound for the second time this season, the southpaw struck out seven and allowed one run on six hits. All four of his starts in April were quality starts as he held a 1.24 ERA in the month. He struck out 25, allowed four earned runs and 20 hits.