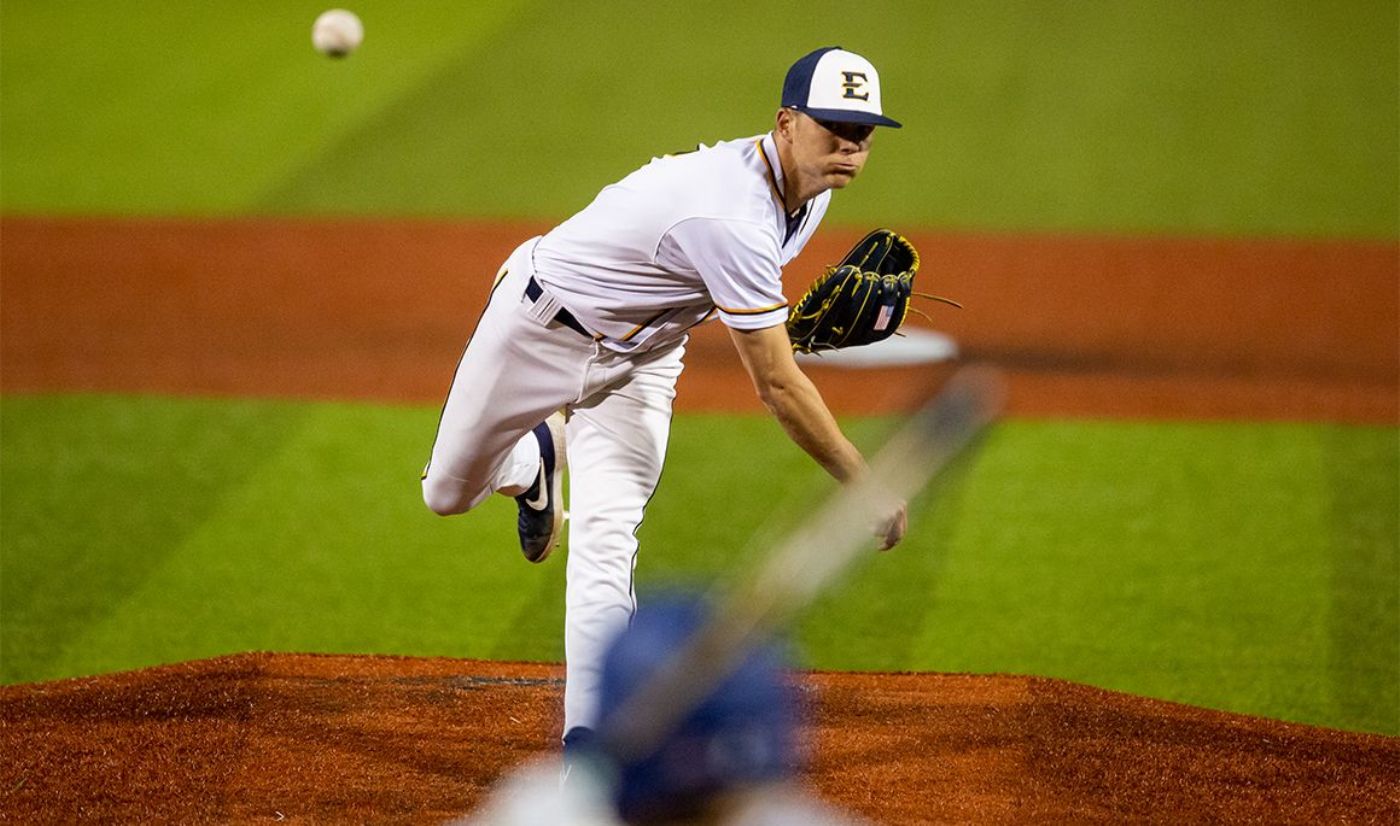 LEXINGTON, VA. (May 15, 2021) — The ETSU Baseball Team concluded its regular-season road slate on Saturday evening against the VMI Keydets at Gray-Minor Stadium in Lexington, Va. After VMI secured the series win with a 3-1 victory in game one of the twin bill, ETSU avoided the sweep with a 9-6 win in the series finale.

How it happened:
GAME ONE: VMI 3, ETSU 1
Game one was a pitcher’s duel from start to finish. Colby Stuart (Elon, N.C.) got the nod for the Blue and Gold going 6.1 innings and allowing one run on five hits and striking out seven Keydets. VMI’s starter, Jacob Menders, celebrated his senior day in stellar fashion, tossing a one-run complete game in the VMI victory. Menders allowed five hits and two walks over 121 pitches.

ETSU got on the board with a two-out Jackson Green (Blackwood, N.J.) double in the fifth. A line drive off the right field wall landed just inches in fair territory to drive in Noah Webb (Kodak, Tenn.) from second.

Unfortunately for the Blue and Gold, that was the only run they would get. VMI got on the board in the seventh with a triple to center field. The Keydets took their first lead of the game in the eighth as Trey Morgan hit a line drive to the wall, just out of the reach of Ben Jackson (Guyton, Ga.) in center to plate two more. VMI took a 3-1 lead into the ninth and Menders retired the Bucs in order for his fourth win of the season.

Stat of the Game
Three of the four runs in the game scored with two outs.

Notables
» Seth Chavez (Pinetop, Ariz.) entered the game with runners on the corners and one out in the seventh. He got out of the jam with back-to-back K’s, but would end up allowing the two runs in the eighth, picking up his third loss of the season.
» All three Bucs in the heart of the lineup recorded a hit.
» ETSU’s pitchers struck out nine batters, while the Bucs only had four K’s at the plate.
» VMI’s Morgan led the game with three hits and two RBI.
» This marked the second time this season the Bucs lost the first two games of a series (at Samford).

GAME TWO: ETSU 9, VMI 6
As they did in game one, both starting pitchers thrived at the beginning of game two. The game’s first hit didn’t come until the top of the fourth when ETSU recorded two and then VMI got into the hit column with one base knock in the bottom half.

Both teams blew open the run column in the sixth. After a beautiful bunt single by Ethan Cady (Soddy Daisy, Tenn.) to shortstop loaded the bases with no one out, the Bucs looked to get on the board first for the second time this afternoon. The Blue and Gold did just that as Bryce Hodge (Knoxville, Tenn.) plated Jackson on an RBI single to left. ETSU’s next two runs scored on a wild pitch and a Keydet error. Up 3-0, the Bucs doubled their lead with three straight base hits off the bats of Kyle Richardson (Knoxville, Tenn.), Green and Jake Lyle (Spring Hill, Tenn.).

VMI scored its first two runs on one swing as Morgan continued his successful day at the plate. He drove in two with the bases loaded on a two-out single to center.

In the eighth, both teams added more to their totals. Green doubled his RBI total with a single to right, plating David Beam (Knoxville, Tenn.). After Richardson scored on a wild pitch, Green scored the Bucs’ final run of the doubleheader on a Lyle double down the left field line.

The hosts cut into the lead in the bottom of the eighth with a 2-run single and a 2-run double. Matthew Bollenbacher (Powder Springs, Ga.) allowed one hit and struck out two in the ninth to secure the 9-6 victory for the Blue and Gold.

Notables
» Nathanial Tate (Manchester, Tenn.) was lights out for the first five innings of his fourth win of the season. He didn’t allow a hit until the fourth and a run until the sixth inning. The junior righty went seven strong innings, struck out seven and allowed two earned runs on six hits.  The Manchester native did not allow a free pass for the second time in SoCon play this season.
» Hodge led the Buccaneer offense with three hits in the finale. It was his third three-hit game this season and 12th multi-hit contest.
» After going hitless in the first two games of the series, Cady tallied two hits in game three. Green was the other Buc with multiple hits in the game.
» This marked the second time this season the Bucs allowed more than 10 hits and won a game. The other time this season was earlier this week at Appalachian State.
» Lyle was the only Buccaneer in the starting lineup to not score a run. He garnered a base hit and two RBI.
» ETSU recorded its fourth win this season without hitting a home run (previously 3-15).

Up next
ETSU concludes the regular season at home this week against Samford. The three-game series will take place on Thursday, May 20 and Friday, May 21. The series kicks off with a 5 p.m. first pitch on Thursday.