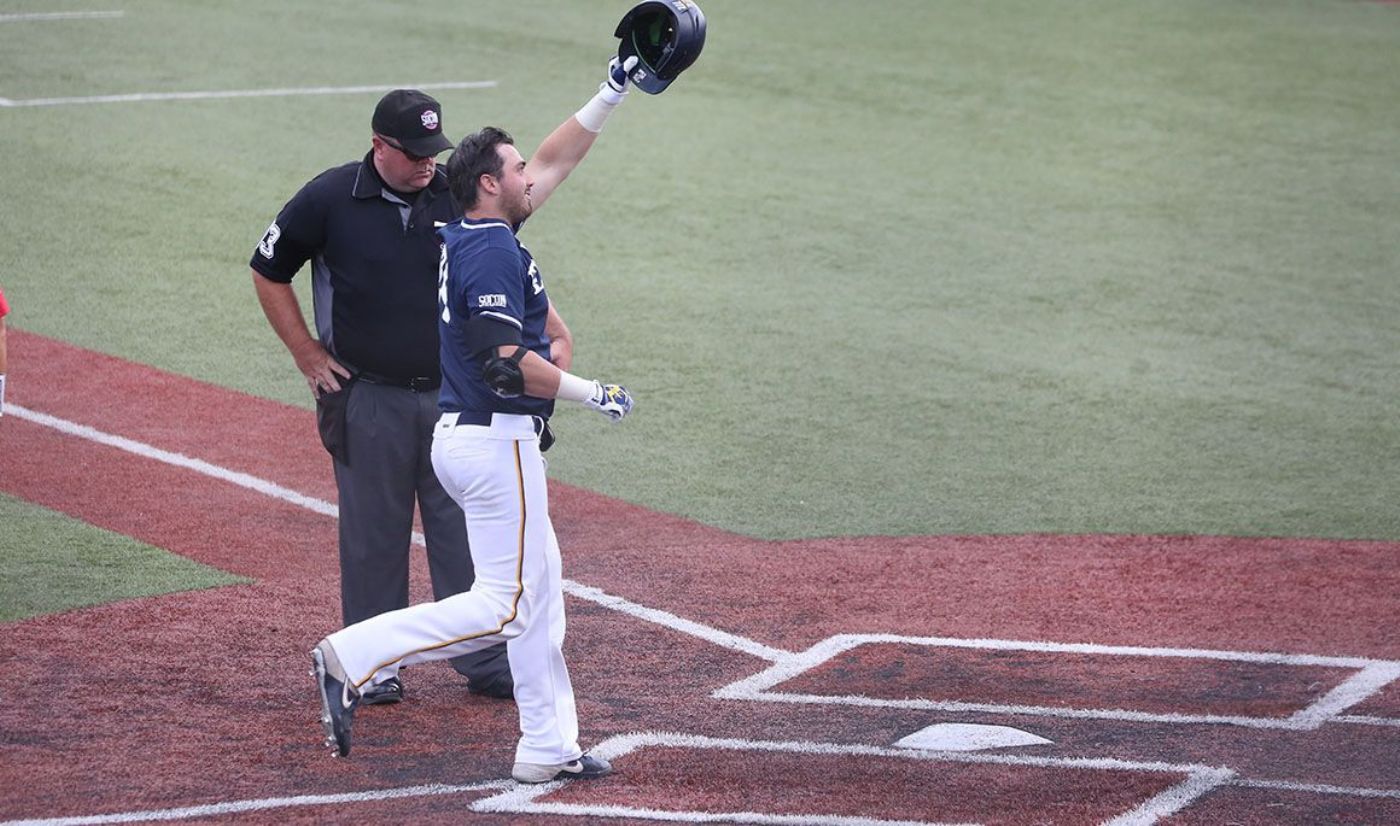 JOHNSON CITY, TENN. (May 21, 2021) — The ETSU Baseball Team concluded its final series of the regular season on Friday evening with a doubleheader split against the Samford Bulldogs. The Blue and Gold took game one 7-3, hitting three home runs, and the Bulldogs spoiled the Bucs’ sweep with a 7-6 extra-inning victory in game two.

How it happened:
GAME ONE: ETSU 7, SAMFORD 3
Unlike game one, which was a pitcher’s duel through the first few innings, both offenses came alive early in game two of the series. After both of ETSU’s first two batters did not reach in the first, the Bucs’ next three hitters reached to bring up Kyle Richardson (Zionsville, Ind.) with the bases loaded. Richardson blasted the 2-0 fastball to the scoreboard in left to clear the bases and give the Bucs a 4-0 lead.

Samford cut its deficit in half with an RBI groundout and an RBI single in the top of the second. In the bottom of the inning, the Bucs’ bats continued to produce. ETSU hit back-to-back homers to put up three runs in the frame. With one on and two outs, Ethan Cady (Soddy Daisy, Tenn.) sent his 13th home run of the season over the center field wall. Two pitches later, Bryce Hodge (Knoxville, Tenn.) drove a screaming line drive to left that cleared the wall and gave ETSU a 7-2 lead.

The Bulldogs plated the game’s final run in the third with a single to left field.

Notables
» The first grand slam for the Blue and Gold this season was Richardson’s fourth home run of the season. It was his first game driving in four runs this season and second of his career.
» Hodge’s home run was the eighth of the season, while Cady’s blast put him in a tie for second in the Southern Conference.
» Colby Stuart (Elon, N.C.) was strong his final start of the season. He went seven innings and allowed three runs, two earned on six hits, striking out three. He moved to 6-1, a team best.
» Matthew Bollenbacher (Powder Springs, Ga.) tossed the final two innings and allowed no runs or hits.

GAME TWO: SAMFORD 7, ETSU 6 (10 innings)
Like the first game of the twin bill, the Bucs got on the board in the bottom of the first. This time it was a Cady groundout to score Ashton King (Knoxville, Tenn.). Samford took its first lead of the series with two runs in the third. ETSU tied the game for a brief moment in the bottom half as Hodge blasted his second home run of the afternoon, a line drive over the wall in center.

The visitors regained the lead in the fourth with an RBI single and then scored two more runs on a Colton Ledbetter RBI triple down the right field line.

ETSU’s bats did not calm down. In the bottom of the fifth, the Blue and Gold hit back-to-back bombs for the second time in the doubleheader. A leadoff blast off the video board by King was followed up by Cady’s second line drive off the day, a solo shot over the wall in right. The Blue and Gold still trailed by one until it was time to stretch at Thomas.

In the bottom of the seventh, Cady reached on a throwing error by Samford with two outs and put himself into scoring position. Two pitches later, Hodge drove him in with a double off the wall in right. In the next at bat, Sean Kearney (Powell, Tenn.) drove in Hodge from second to give ETSU the lead.

The lead did not last long as the Bulldogs’ Ryan Crocket hit a leadoff home run over the left field wall to tie the game at six. The game was tied entering the ninth and neither team could put a push a run across.

Samford’s Garrett Howe doubled to left center in the tenth to take a one-run lead. In the bottom half, with one out, Jake Lyle (Soddy Daisy, Tenn.) faced a 3-2 count and looked at a high third strike above the letters. After Drew Haynie (Brentwood, Tenn.) drew a two-out walk, Reese Farmer (Winterville, N.C.) hit a line drive to center to put runners on the corners. The Bucs couldn’t push the tying run across as the Blue and Gold fell in the season finale, 7-6 in 10 innings.

Stat of the Game
This was just ETSU’s fourth extra inning game of the season. They are 1-3 in those contests.

Notables
» King, Hodge and Kearney all recorded two hits in the contest.
» King, Cady and Hodge, the 1-3 hitters in the Buccaneer lineup scored all six runs. Those three and Kearney accounted for all six RBI.
» In just his second at-bat this season and the final of his collegiate career, Jake Madole (Hampstead, N.C.) singled in the seventh.
» David Beam (Knoxville, Tenn.), Haynie and Lyle all walked once in their final collegiate game.
» Nathanial Tate (Manchester, Tenn.) got the nod in the season finale and went six innings and allowed five runs on 11 hits. Matthew Mercer (Chattanooga, Tenn.) pitched the final two innings, picking up the loss. He allowed a run on two hits and struck out three.
» Samford’s Chase Isbell got the win, tossing the final three shutout innings and allowing just two hits and a walk.
» The Bulldogs’ Colton Ledbetter, who was a last-minute change in the starting lineup, went 4-for-5 with two RBI.
» Max Pinto of Samford was hitting .441 in his last eight games and was 1-for-12 in the series.

Up next
ETSU concludes the regular season as the No. 5 seed and will miss the SoCon Tournament. Samford won the blue division with a 20-10 record in the league and will be the No. 3 seed in the tournament.