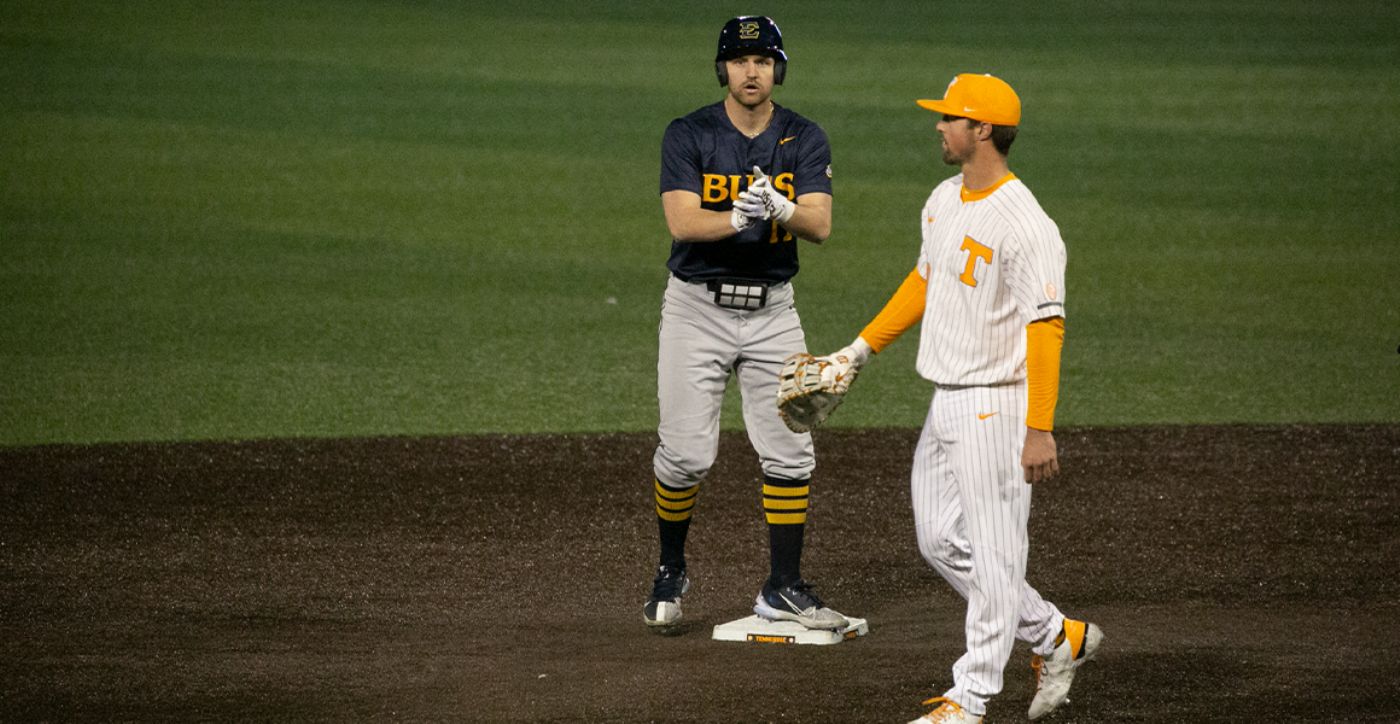 Despite holding the nation’s top offense to a season-low four runs, the Bucs were unable to string together runs as the Blue & Gold fell 4-1 against #6 Tennessee.

It was the making of another close pitching matchup with just two total hits through the first three innings. Landon Smiddy (Knoxville, Tenn.) had allowed a leadoff single, but Ryan McCarthy (Knoxville, Tenn.)hosed down UT’s baserunner for his second caught stealing of the season and the Vols would generate nothing else that inning. Tennessee would get two baserunners on in the second inning, but Smiddy was able to get a pop out to end the inning. The Vols wouldn’t attempt a stolen base the rest of the game.

The Bucs wouldn’t get their first hit of the game until the top of the fourth with a Cam Norgren (Cary, N.C.)single up the middle with two outs. Norgren would finish the game 2-for-4 with a double to the left-center gap.

Tennessee would get on the board the half following ETSU’s first hit with a two-run homerun by Trey Lipscomb. It was just UT’s third hit of the game. UT would score their other two runs in two separate innings.

David Beam (Knoxville, Tenn.) would generate the longest at-bats of the day, fouling off five-consecutive pitches before drawing a walk on a 12-pitch at-bat. With two outs, Garett Wallace (Sanford, Fla.) ripped a 2-1 pitch to left field off the wall, bringing in Beam for ETSU’s first run of the game. UT’s Zander Sechrist was taken out of the game following that RBI by Wallace.

Nathanial Tate (Manchester, Tenn.) would come in relief in the bottom of the fifth and despite giving up a leadoff double, Tate would get three straight outs to keep ETSU’s deficit at one.

With two outs in the following inning, Norgren would blast his double to left center to put a runner in scoring position. Noah Webb (Kodak, Tenn.) would barrel a 2-2 pitch through the right side, but Norgren would be thrown out with the play at the plate. Umpires went to review the play immediately afterward, but the ruling was upheld. After the 6th, ETSU would generate just one baserunner on a Jared Paladino (Levittown, N.Y.) single to right in the 8th with two outs.

Norgren was the only batter for both teams to record multiple hits tonight. Tennessee would get insurance runs in the 6th and 7th on a bases-loaded walk and an RBI-double, respectively. UT left nine runners on base compared to ETSU’s six.

Coming into today’s game, ETSU and Tennessee had combined for 188 runs in 13 combined games.

The Bucs will continue their road trip with a three-game series at Winthrop this weekend. First pitch on Friday, March 4 is set for 3 p.m.