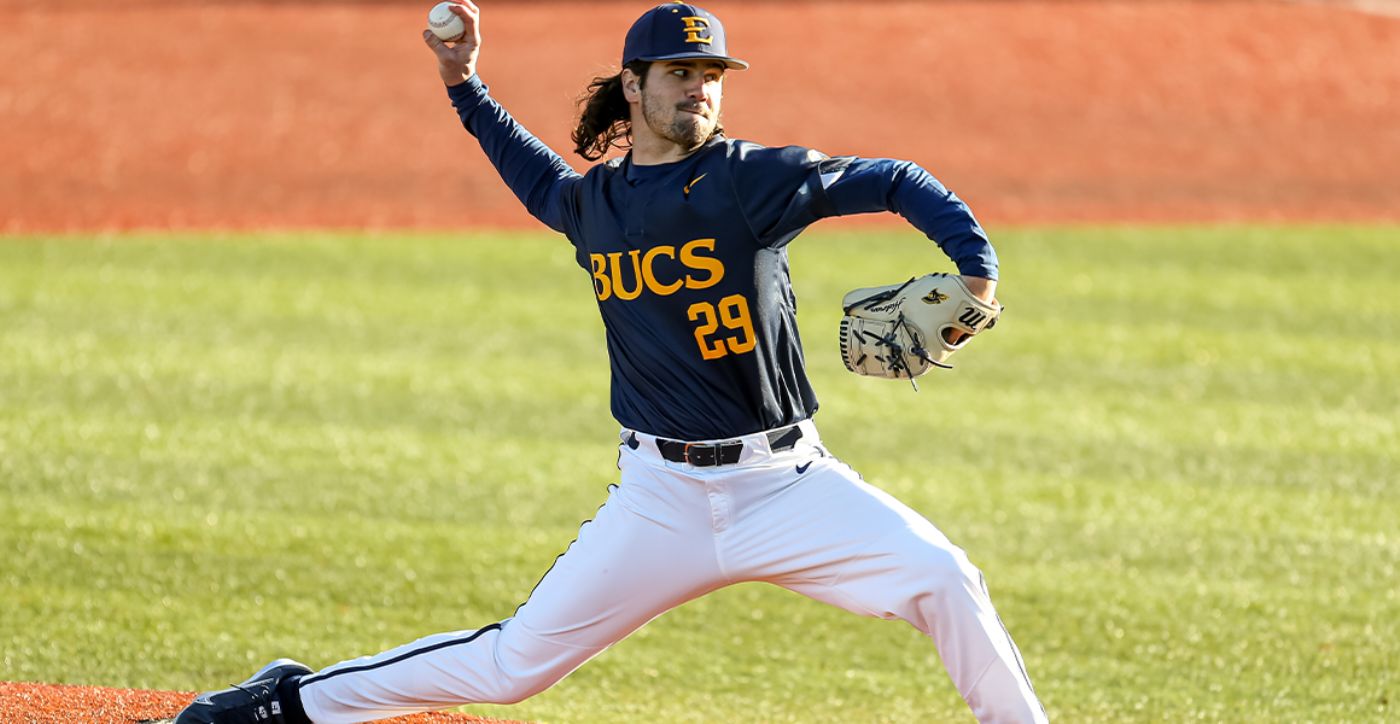 ROCK HILL, S.C. (Mar. 5, 2022) – In a weekend full of back-and-forth baseball, ETSU delivered the final blow when it counted most.

The Bucs took game three against Winthrop 5-3 Sunday afternoon at Winthrop Ballpark. ETSU has won both rubber matches that it’s been in. Six of the nine runs in the game came in the final two innings.

The first two frames of the inning saw minimal action as Hunter Loyd (Knoxville, Tenn.) and Winthrop’s Parker Whittle weren’t backing down from the rubber match challenge. Bryce Hodge (Knoxville, Tenn.) got the game’s first hit with two away in the first, but ETSU wouldn’t get another baserunner until the fourth inning as Cam Norgren (Cary, N.C.) drew a two-out walk.

Winthrop grabbed the game’s first run as the throw on Winthrop’s stolen base to third got away from Norgren. Loyd would get the following batter out on a grounder to third. Loyd would get out of a bases-loaded, two-out jam with his fifth strikeout of the afternoon in the following inning.

ETSU finally got on the board courtesy of a David Beam (Knoxville, Tenn.) leadoff shot down the left-field line to start the fifth. Beam’s home run was just the second hit of the game up to that point. Both of Beam’s home runs this season have been solo. Neither team would score again until the eighth.

The bottom of the sixth would see two runners get on before Andrew Ronne (Athens, Tenn.) was the first in relief for the Bucs. Ronne would get a line drive hit sharply to Justin Hanvey (Purcellville, Va.), who then turned his immediate attention to the runner on first and made the throw back in time for a double play. Ronne would get the next batter out on a strikeout.

Hanvey would continue to make plays late, leading off the eighth inning with a home run to left as ETSU would take the 2-1 lead. It was Hanvey’s 10th pitch of his at-bat after fouling off six pitches. Both of Hanvey’s home runs this season have come as the leadoff man in the eighth inning. Hanvey now has three career home runs.

The story wasn’t done there, as Winthrop would respond as they have all weekend. With one out, Winthrop would string together three singles to tie the game and score the go-ahead run on a wild pitch. Ronne would get the last two outs of the inning on a strikeout and a fly-out.

If we’ve learned anything over the weekend, it’s that ETSU will punch back. Norgren would lead the top of the ninth inning with a hit-by-pitch and Beam would walk with one away to put the go-ahead runner on. Enter pinch-hitter Jackson Green (Blackwood, N.J.) who drove in three yesterday, did it again with one swing. Green sent his 1-2 pitch to deep right-center for a three-run home run, ETSU’s third of the game and Green’s first of the season.

Up 5-3 going into the ninth, the Blue & Gold brought in Nathan Hickman (Lenoir City, Tenn.) to shut the door, and his job went done. Winthrop would get two baserunners on with a walk and single, but three strikeouts by Hickman ended the day.

In his fourth relief appearance of the season, Ronne earned his first collegiate win going three innings giving up one earned run and striking out four. No Buccaneer recorded a multi-hit night and ETSU’s pitching held Winthrop to leave 11 Eagles on base.

The Bucs will end their road trip in the South Carolina state as they head to Clemson on Tuesday, March 8. First pitch is set for 4:00 p.m.