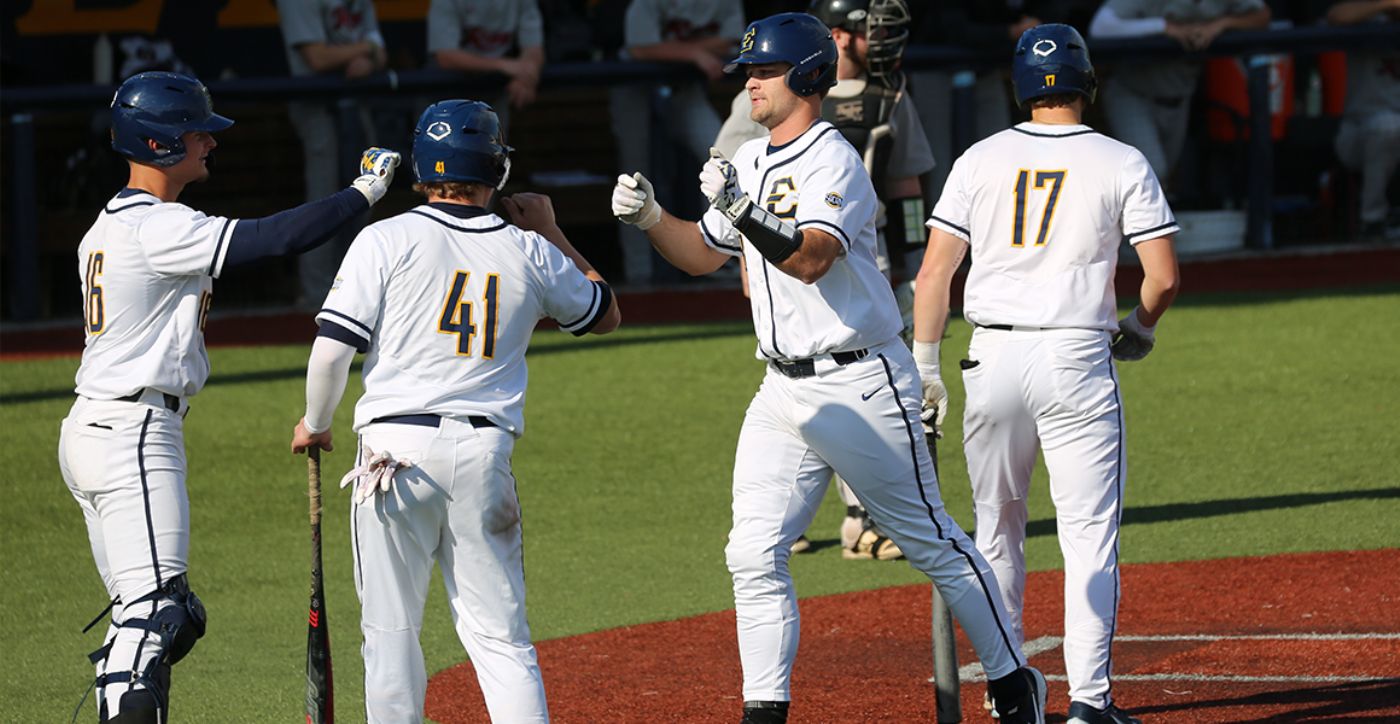 The Blue & Gold took both games of a doubleheader against Rider at Thomas Stadium, taking game one 2-1 followed by a 12-0 rout in game two. ETSU’s pitching on the day combined for 18.0 innings, seven hits, and just one run.

It was a pitcher’s duel in the making as just three combined hits in the first three innings saw the game breeze by. Tommy Barth (Brecksville, Ohio) snagged the game’s first hit in the first inning, but the Bucs wouldn’t get anything until the fourth inning when Cam Norgren (Cary, N.C.) sent one to deep leftfield, his fourth of the year, to give ETSU the 1-0 lead.

That one run was all Zach Kirby (Upland, Calif.) needed as the typical Friday starter was locked in for game one of the doubleheader. Kirby faced the minimum in six of seven innings, retiring the first seven before Rider got on the board with their first hit in the third.

With runners on first and second and two away, Rider’s Socrates Bardatsos sent Kirby’s 2-2 pitch to deep left field that would be a hit in most cases, but not in left field when Garett Wallace (Sanford, Fla.). Wallace made the leaping catch at the warning track before slamming into the left-field wall to record the final out of the inning. Kirby would continue for another four innings before Matt Bollenbacher (Powder Springs, Ga.)provided relief in the eighth and retired the Broncs in order.

The Bucs got extra insurance as Leo Jiminian (Saint-Lo, France) started the eighth with an eight-pitch walk. Jiminian got pushed to second on a sacrifice bunt from Ryan McCarthy (Knoxville, Tenn.), putting a runner in scoring position for the team-leader in RBIs, Garett Wallace. Wallace hammered his 3-1 pitch to the left-center wall for a double and yet another RBI-hit.

That run would prove costly as ETSU got into trouble in the top of the ninth as Rider created a bases loaded, one out situation. Nathanial Tate (Manchester, Tenn.) would get a groundout on the second pitch thrown, but Rider would score to make it 2-1 with runners on first and second. Tate wouldn’t allow anything more as he struck out the final batter of the first game. Tate’s save makes it three separate Bucs that have recorded a save, and three consecutive games with a save.

ETSU’s offense has been dominant at home, and it was on full display in game two of today’s doubleheader.

Barth grabbed a hit in the first inning for the second consecutive game, yet this was a triple down the right field line, putting the possible first run just 90 feet away. Bryce Hodge (Knoxville, Tenn.) would start his career day bringing in Barth with a SAC fly to open the scoring. Norgren would also triple in the inning to put another runner 90 feet, but nothing came out of it.

The second inning saw more firepower as Jiminian continued the scoring with a lead-off shot to center field, his third of the year. Barth would rack up an RBI-double to the gap to score Ashton King (Knoxville, Tenn.)and make the scoring 3-0 before Hodge blasted his first home run off the scoreboard to make it 5-0 after two innings.

Colby Stuart (Elon, N.C.) looked back in the groove through four innings, not giving up a hit until the fifth inning and making a few plays on some bunts back to Stuart. Stuart would get into a two-out, bases loaded jam before Landon Smiddy (Knoxville, Tenn.) provided relief. With one pitch, Smiddy got Rider’s batter to fly out to right and preserve the shut out.

The bottom of the sixth saw the game burst open in favor of the Blue & Gold. Wallace and David Beam (Knoxville, Tenn.) clipped back-to-back doubles to start the inning and King and Barth followed up with a pair of singles before Rider made their second pitching change of the game. Hodge then blasted his second home run of the game, fourth of the season, back to left field to put the Bucs up double-digits. Logen Sutton (Knoxville, Tenn.) and Beam would bring in the next two runs and end the scoring.

The latter portion of the game saw the career debut of Anthony Nelson (Pembroke Pines, Fla.), who put together two pop outs and a line out to get through his first career inning at the Division I level. Cade Carlson (Carmel, Ind.) and Trevor Hanselman (Tallahassee, Fla.) provided the back end of relief to preserve the shutout.

The Bucs will take tomorrow off due to the expected inclement weather. ETSU is expected to play UNC Asheville around 3:00 p.m. on Sunday, March 13.