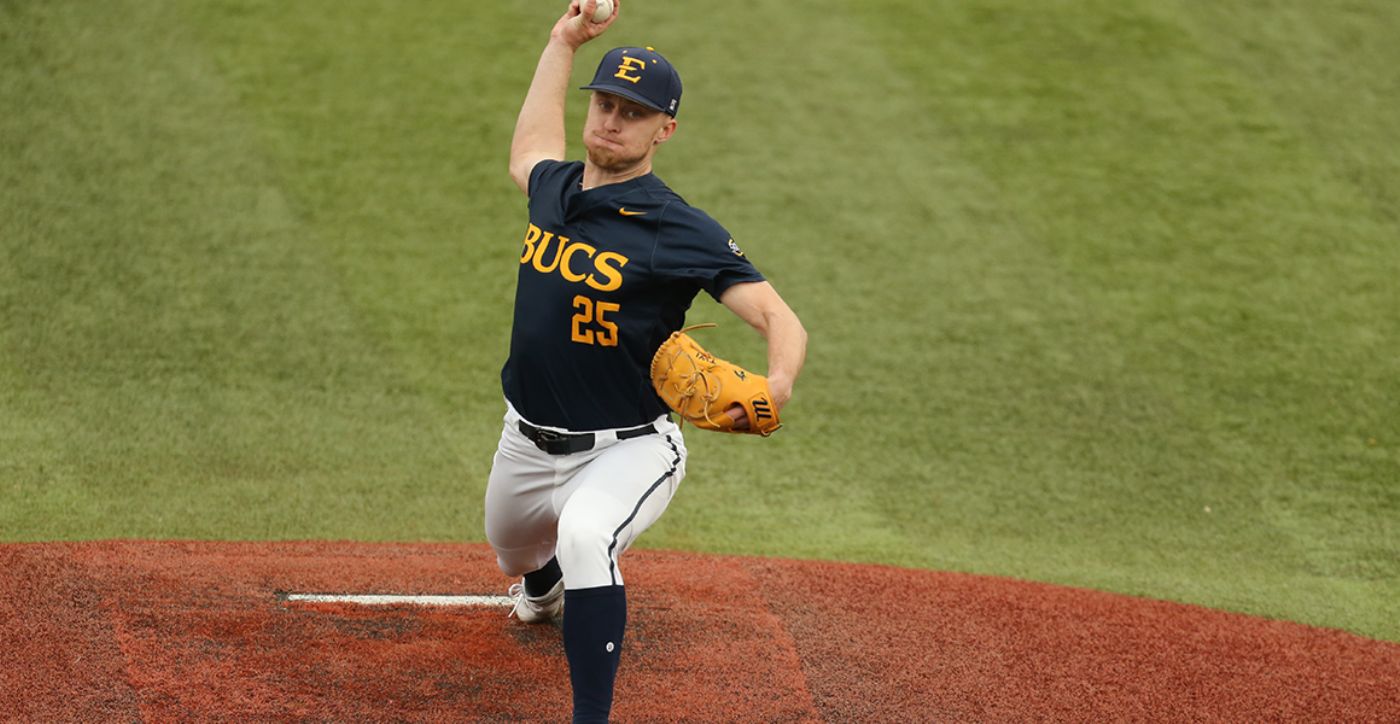 Barth and Hodge with RBIs in the ninth, Bollenbacher strikes out seven

The Bucs took game one of a three-game series at Western Carolina 5-3 following a two-run ninth after no scoring from the sixth to eighth innings. Tonight’s win is the smallest margin of victory since a 2-1 win against Rider in the first game of a doubleheader over the Broncs on March 11.

Following a two-run second inning by Western Carolina, ETSU strung together a two-out rally aided by a Catamount error. Bryce Hodge (Knoxville, Tenn.) extended his streak of reaching base to his last seven plate appearances on that error, and Cam Norgren (Cary, N.C.) singled Hodge to third and came into second behind him. Noah Webb (Kodak, Tenn.) then recorded his two RBIs of the day on one swing to tie the game on a full count.

Logen Sutton (Knoxville, Tenn.) corralled his fourth RBI of the season to put ETSU ahead, but Western Carolina responded right back with the lone home run of the game, a solo shot to right. Zach Kirby (Upland, Calif.) got out of that same inning but finished his outing with three earned runs through five.

Following a career-long outing in relief, Bollenbacher got his name called and shined again. After throwing five innings on Sunday against Baylor, Bollenbacher through four innings without giving up a run or walk while striking out seven, a career-high. Bollenbacher, who earned the win in relief, has earned each of his four wins in relief after starting opening day.

Tied at three into the ninth, Hodge and Tommy Barth (Brecksville, Ohio) didn’t like the idea of extra innings in the low-30s. After Sutton singled to lead off the inning and Ashton King (Knoxville, Tenn.) bunted him over, Barth laced a base knock right back up the middle to give ETSU the lead. As Barth managed to get to third on Western’s fifth error of the game, Hodge delivered an RBI double in the next at-bat to give ETSU more insurance. Bollenbacher worked around a two-out double to strike out a pair and end any threat.

In the three weekends where ETSU has won the first game, the Bucs have taken the remaining two, sweeping Northern Kentucky and George Washington while taking two from Rider and one from UNC Asheville in one weekend.

Only four of ETSU’s 18 wins on the season have been decided by two or fewer runs.

The two mountain rivals will take on game two of this three-game set in Cullowhee tomorrow afternoon with first pitch set for 3:00 p.m. The game will be streaming on ESPN+.