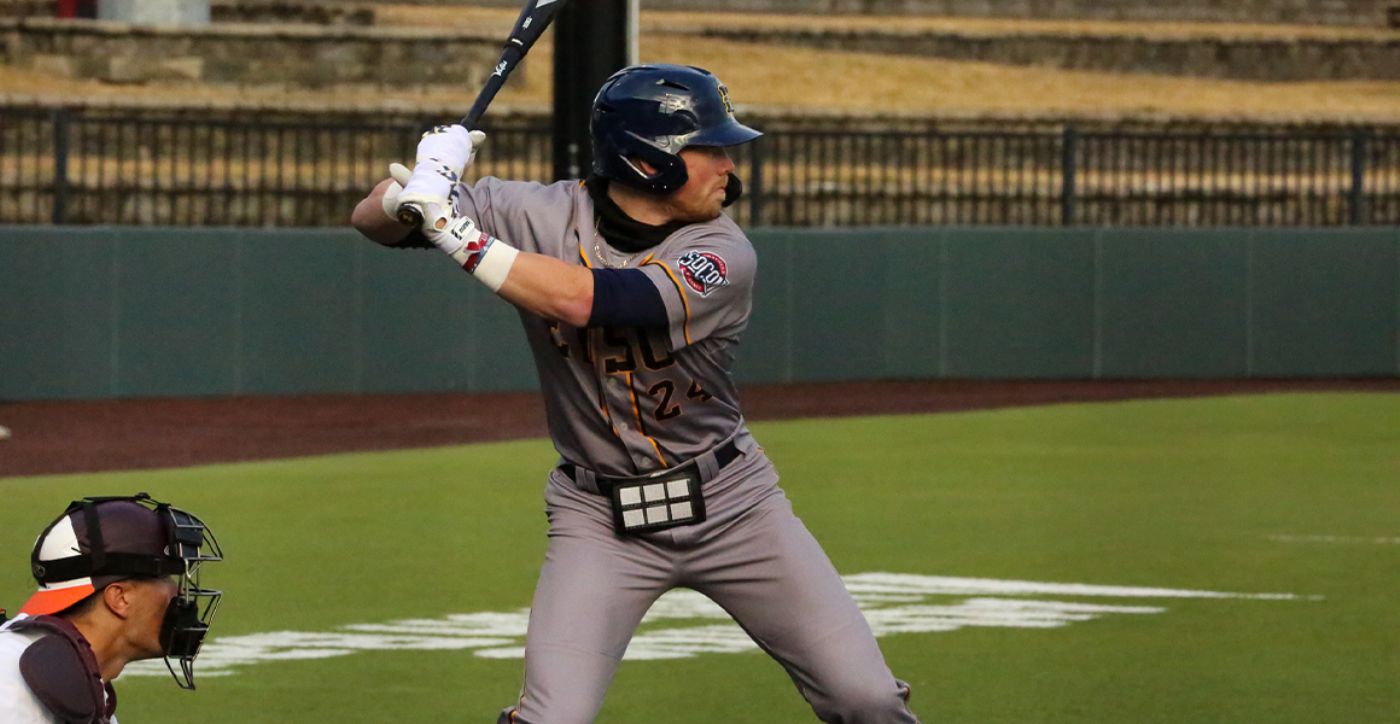 Bucs were down four going into the seventh, two into the ninth

CULLOWHEE, N.C. (April 9, 2022) – A snowy, Saturday slugfest saw the Blue & Gold rally from behind to clinch the first conference series of the season.

ETSU took game two of a three-game series at Western Carolina 13-11 behind a season-high six home runs from five different players, the most since the single-game program record (seven) set against Georgia State on March 1, 2020. The Bucs were down 11-7 after seven innings and 11-9 after eight innings.

Despite the season-high home runs, Cam Norgren (Cary, N.C.) started the scoring with an RBI single in the first to score Barth. The Catamounts responded with three of their own in the bottom half to take an early lead.

Wallace started his two-home run day with a 2-0 blast to left field to tie it with Leo Jiminian (Saint-Lo, France) aboard. Western Carolina would again respond with three runs but a solo, first-pitch shot from Barth in the third and a one-out opposite-field blast from Webb tied it back at six after just three innings.

Landon Smiddy (Knoxville, Tenn.) provided quality relief for Colby Stuart (Elon, N.C.), who went just 1.2 innings. Each team would trade a run in the fourth as Wallace cranked his second of the game to deep left-center. The Catamounts built upon their lead with a three-run homer in the sixth.

Hodge’s first home run since a two-homer game against the Baylor Bears last weekend cut the deficit in half, sending the first pitch he saw also to deep left-center. Andrew Ronne (Athens, Tenn.) came in after Smiddy and worked a pair of strikeouts while surrendering two baserunners.

Looking to rally in the ninth, Hodge and Norgren each singled on the first pitches they saw, instantly putting the go-ahead run at the plate. Jared Paladino’s (Levittown, N.Y.) RBI-single to cut the lead to one with two outs, and Green belted the 1-0 offering to right field to give ETSU the two-run lead. All three runs scored in the ninth came with two outs.

Nathanial Tate (Manchester, Tenn.) picked up his third save of the season, eighth in his career, working around a one-out single to get a pair of strikeouts. Tate’s third save in the season matches his season-high back in 2019 when he went 4-0 with a 1.21 ERA in 18 relief appearances.

Since 2015, the Bucs have secured their second of three-road series in Cullowhee, sweeping the Catamounts in 2018. In that series, the Bucs scored double-digit runs in all three contests (11, 14, 11).

The Blue & Gold generated all 13 runs off RBI singles or home runs.

ETSU will look to complete the conference-opening sweep over the Catamounts tomorrow afternoon in Cullowhee with first pitch set for 1:00 p.m. The game will be streaming on ESPN+.