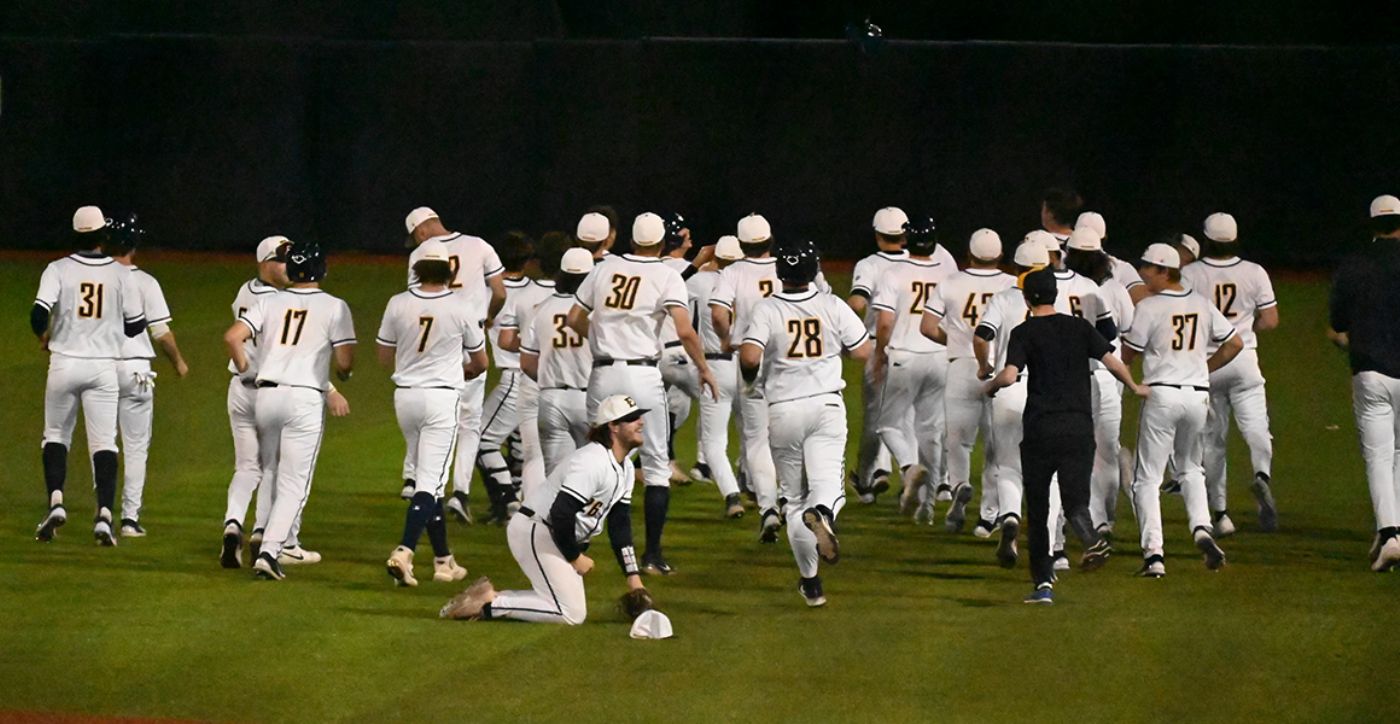 JOHNSON CITY, Tenn. (April 22, 2022) – Down six with three innings to go, the Buccaneer offense wasn’t rattled by the deficit or the moment.

Four runs in the final four innings saw ETSU steal game one of a three-game series at home against VMI 9-8 in 10 innings, sealing the comeback on Tommy Barth’s (Brecksville, Ohio) walk-off single. Noah Webb (Kodak, Tenn.) sent the game to extra innings with a three-run homer in the bottom of the ninth with two outs.

VMI was the first to get on the board with a pair of singles and a sacrifice bunt to move runners around, as two would score on a two-out double.

Wasting no time to get those runs back, Barth and Bryce Hodge (Knoxville, Tenn.) would also begin the bottom half with back-to-back singles and Cam Norgren (Cary, N.C.) brought them both in with a two-RBI double to left. Garett Wallace (Sanford, Fla.) would bring in Norgren with an RBI single to give ETSU a one-run lead.

Zach Kirby (Upland, Calif.), who got his third-consecutive series-opening start, hurled three scoreless innings following the first, getting a 5-4-3 double play to end the third and his second strikeout of the night to end the fourth.

Trailing by one, VMI put together five runs on just three hits to take a four-run lead as two of the five runs came in on sacrifice bunts. The Keydets would also tack on another run in the sixth inning with a sacrifice fly to make it a five-run lead.

Looking to spark a rally, Justin Hanvey (Purcellville, Va.) sent a 1-1 pitch to deep left field to cut the lead down to four after seven innings. Hanvey has three on the season and all have been solo home runs. With the bases loaded and no outs, David Beam (Knoxville, Tenn.) plated a run to trim ETSU’s deficit to three.

In the ninth, Barth and Hodge each got on after six-pitch at-bats and an error by VMI’s third basemen put runners on first and second with two away. Enter Webb, who hammered a 1-1 pitch right over the 400-mark in straight-away center field to tie the game. All three runs counted as unearned and ETSU went into extra-innings after being down six after six innings.

Colby Stuart (Elon, N.C.) had a sensational relief outing to keep ETSU in the game and gave way to Nathanial Tate (Manchester, Tenn.) to record the final two outs of the tenth inning with the bases loaded.

Jared Paladino (Levittown, N.Y.) started the tenth-inning rally with a single to right-field and Beam bunted over Leo Jiminian (Saint-Lo, France) to get a runner at second with one away. Hanvey drew a 3-2 walk and Ashton King (Knoxville, Tenn.) grounded into a fielder’s choice to leave runners at first and second with two away.

Barth would lace the first pitch he sees into right field, scoring Hanvey and completing the comeback.

ETSU will host VMI for game two of this three-game series at Thomas Stadium with first pitch tomorrow set for 2:00 p.m. The game will be streaming on ESPN+.