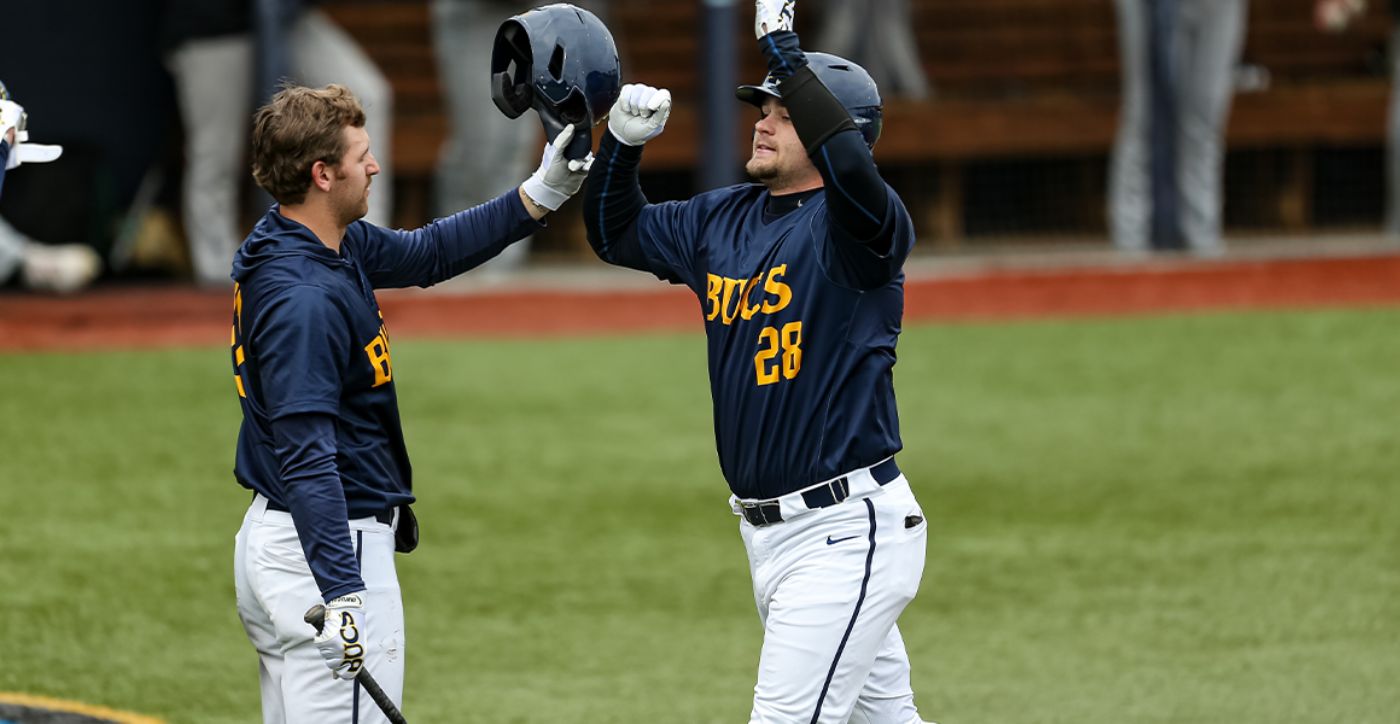 Three of first four hits came via the long ball

The 16th double-digit run output saw ETSU complete the sweep at home over VMI 10-4. The Bucs held a 5-3 lead after seven innings before ETSU put up five runs in the eighth, all with two outs. The Bucs have now won five of the last six against VMI at home.

A similar story from the last two games began as VMI struck first with a solo blast to left field in the second, but that’s all Landon Smiddy (Knoxville, Tenn.) would give up in four innings of work. Smiddy faced runners on the corners and one out in the third but made the heads-up play on a bunt so Noah Webb (Kodak, Tenn.)could make the play at the plate.

With two away, Tommy Barth (Brecksville, Ohio) continued his hot streak as he belted a two-run bomb to the left-center gap, giving ETSU a one-run lead. Bryce Hodge (Knoxville, Tenn.) didn’t waste any time as he hammered his 1-0 pitch to far-left field and give ETSU back-to-back homers. Just an inning later, Webb crushed his team-leading 11th homer of the season. Just a few pitches before, Webb trotted to first as though he was hit by the pitch but was told to come back to the plate.

Clinging to a four-run lead, Nathan Hickman (Lenoir City, Tenn.) struck out a pair in the fifth, but VMI loaded the bases with no outs in the next inning. After bringing one home, Justin Hanvey (Purcellville, Va.) made a heads-up play to get the force-out at home and Webb completed the 5-2-3 double play to keep VMI’s damage minimal.

The Keydets plated another run in the seventh as Nathanial Tate (Manchester, Tenn.) relieved Matt Bollenbacher (Powder Springs, Ga.) to get his second crack at this VMI lineup. On Tate’s first pitch, VMI’s two-hole hitter grounded right into a fielder’s choice to keep VMI off the board in the eighth.

After a pair of one-out walks to begin the eighth, the Buccaneer offense found a groove and broke open the game big. Jackson Green (Blackwood, N.J.) grabbed an RBI single to score Webb while Hanvey laced one to center to plate Green and Garett Wallace (Sanford, Fla.). Ashton King (Knoxville, Tenn.) added his second double of the game in the following at-bat and Barth brought him home to make it four-consecutive hits with two outs. 17 of the 27 RBIs on the weekend happened with two outs in the inning.

VMI would add one in the ninth on a leadoff solo homer, but Tate would get the final three outs of the inning to finish the sweep.

The Bucs improve to 7-7 when their opponent scores first, grabbing three from this weekend’s series sweep. In ETSU’s four wins on the week, their opponent has scored first in all of them.

ETSU will travel to Radford Tuesday afternoon for a midweek contest against the Highlanders, the third and final scheduled one of the regular season. First pitch Tuesday is set for 6:00 p.m. The game will be streaming on ESPN+.