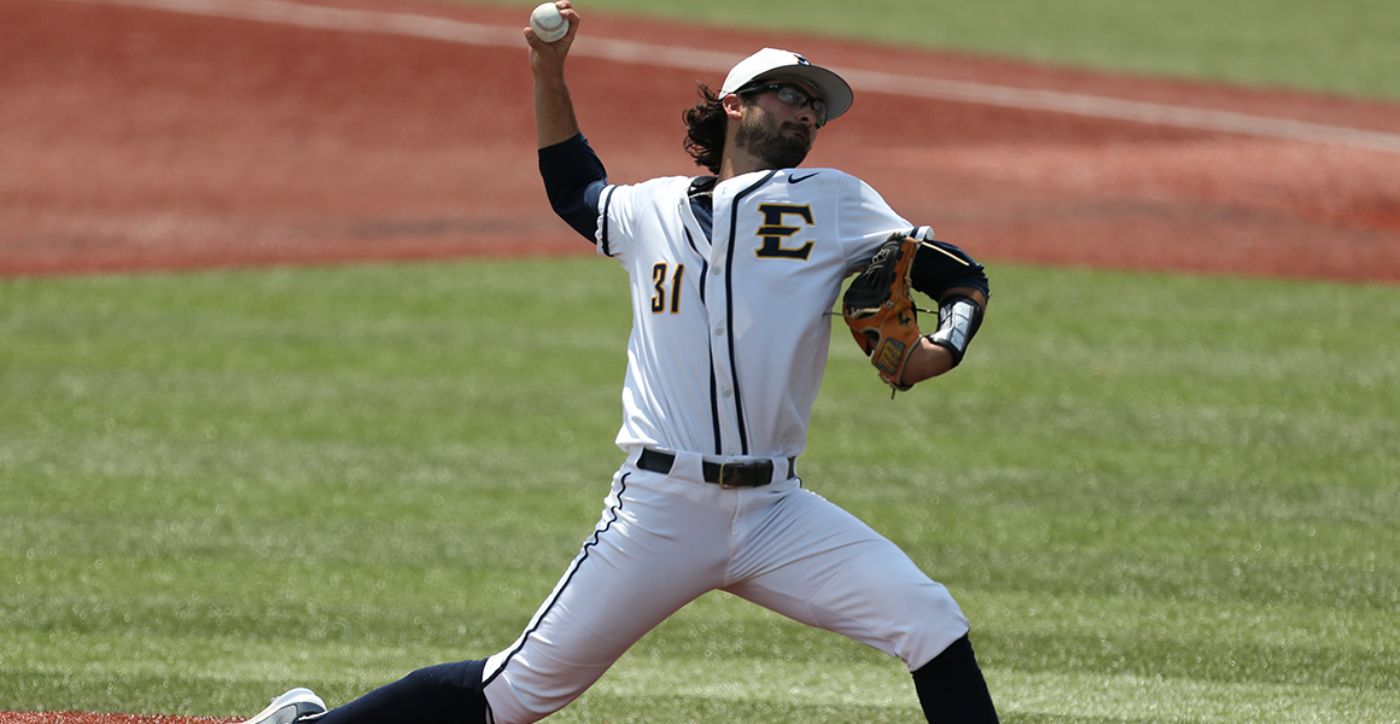 Seven strikeouts over 7.1 innings, two earned runs and no walks

JOHNSON CITY, Tenn. (April 29, 2022) – Zach Kirby (Upland, Calif.) showed his best against one of the best offenses in the nation.

In their fifth extra-inning game of the season, Mercer stole game one of a three-game set at Thomas Stadium against the Bucs 10-3 in 11 innings. Kirby, who was dealt a no-decision, went 7.1 innings while striking out seven and giving up just two earned runs. Kirby’s seven strikeouts match his career-high set in 2020 in a five-inning outing against Georgia State (3/1/20).

After Mercer plated the first run of the game, the Buccaneer bats came out firing. Tommy Barth (Brecksville, Ohio) belted his fifth home run of the season to deep left-center, and Bryce Hodge (Knoxville, Tenn.)hammered his 11th of the campaign just a few pitches later. Last weekend, Barth and Hodge went back-to-back in the finale of a three-game set against VMI.

A groundout-RBI from Justin Hanvey (Purcellville, Va.) paved the way for a two-run lead for Kirby, who was fresh off retiring his last seven batters. Following the seventh inning, Kirby had retired 15 of his last 17 batters as the only two put up solo home runs from a team that sits in the top-5 in the nation in that category.

After Mercer tied it at three, the bottom of the seventh saw a crucial turning point. After getting a baserunner on in every inning prior, Cam Norgren (Cary, N.C.) wanted to give ETSU the lead himself. Norgren blasted his 1-1 pitch to straight-away center, only to be robbed by Mercer’s Bill Knight. Through 38 games, this was ETSU’s first home run that was robbed.

Kirby gave way to Matt Bollenbacher (Powder Springs, Ga.), who only needed three pitches to get two outs in the eighth. Bollenbacher would retire the first nine he faces, racking up six strikeouts in the process to keep ETSU in it.

Looking to go for the walk-off, Ryan McCarthy (Knoxville, Tenn.) barreled the 1-2 pitch to left field in the ninth, only to be corralled by Mercer’s left fielder. ETSU would only get two runners on in the final three innings off Mercer’s Jackson Kelley.

Following a double off the third-base bag and a line drive right back to Bollenbacher, Mercer would go on to score seven runs in the top of the eleventh.

Today’s game saw just one total walk, given to Hodge in the ninth inning with two outs off Jackson Kelley. The Bucs fall to 2-3 in extra-inning games, all of which coming at home.

The Bucs look to even the series tomorrow afternoon with a 2:00 p.m. first pitch at Thomas Stadium. The game will be streaming on ESPN+.