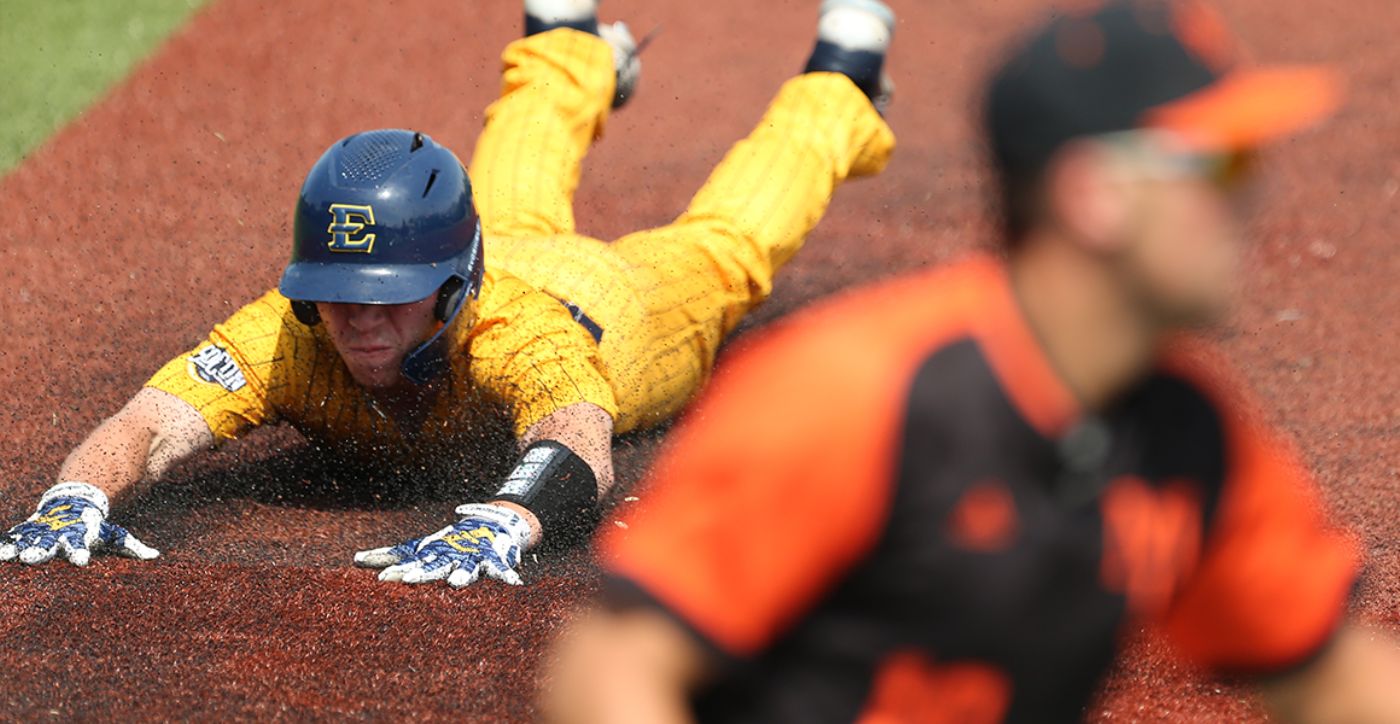 JOHNSON CITY, Tenn. (April 30, 2022) – After sweeping a doubleheader earlier in the season, that order fell through against the SoCon-leading Bears.

ETSU and Mercer split the Saturday doubleheader at Thomas Stadium as the Bucs snatched game one 6-4 while Mercer responded with a 6-3 win themselves, clinching the series. The Bucs used a three-run seventh and two-run eighth for their fifth come-from-behind win this season, solidified by Nathanial Tate’s (Manchester, Tenn.) stunning relief outing to start the day.

At the start of game one, ETSU’s offense got going with three singles from Tommy Barth (Brecksville, Ohio), Cam Norgren (Cary, N.C.), and Ashton King (Knoxville, Tenn.) to open the scoring. King’s RBI-single was enough as Hunter Loyd (Knoxville, Tenn.) shut down Mercer’s offense for the first six innings.

Loyd, who didn’t get the decision last week in a 10-5 win over VMI, struck out eight over six full innings, allowing just one run in the sixth that saw Mercer successfully executed the double steal. Loyd faced trouble numerous times, but heads-up defense and timely strikeouts kept it close.

In the seventh, Loyd gave way to Tate with the bases loaded and one out, but Mercer’s offense couldn’t be withheld any longer. A three-RBI single with a full count gave Mercer the three-run lead, only for the Bucs to work some late-inning magic.

The next frame saw ETSU put up a three-piece as well as Bryce Hodge (Knoxville, Tenn.) and Norgren laced doubles in back-to-back at-bats, scoring Barth, who got on with a walk, and Hodge. King would add another RBI after as he plated Norgren, and the game was tied at four.

Tate, despite allowing that single to give Mercer the lead, would strike out three of his final seven batters, including a pair of line drives hit right to ETSU’s infielders. In the eighth, a leadoff single from Leo Jiminian (Saint-Lo, France) and an RBI double from Ryan McCarthy (Knoxville, Tenn.) would give ETSU the lead, only to see McCarthy score later on a wild pitch. Tate ended the game with a backwards K to tie the series.

In game two, Mercer struck first in a big way with three runs, including a first-pitch, opposite-field bomb. The Bucs responded with two runs of their own on a wild pitch and an RBI groundout from Garett Wallace (Sanford, Fla.). Mercer scored another pair of runs in the following frame as seven of the total nine runs in game two came in the first three frames.

After Colby Stuart (Elon, N.C.) was the first arm out of ETSU’s bullpen, Andrew Ronne (Athens, Tenn.) followed to keep Mercer scoreless in the final four frames. The two clubs combined for just two total runs in the final seven innings. ETSU got a runner on in five of the last six innings, but couldn’t bring them around to score.

ETSU’s streak of double-digit hits in home games ends at 11 after an eight-hit outing in game two of the doubleheader. 18 of ETSU’s 25 double-digit hit games this season have come at home.

Pitchers of Record (Game One)

The Bucs look to even the series tomorrow afternoon with a 2:00 p.m. first pitch at Thomas Stadium. The game will be streaming on ESPN+.