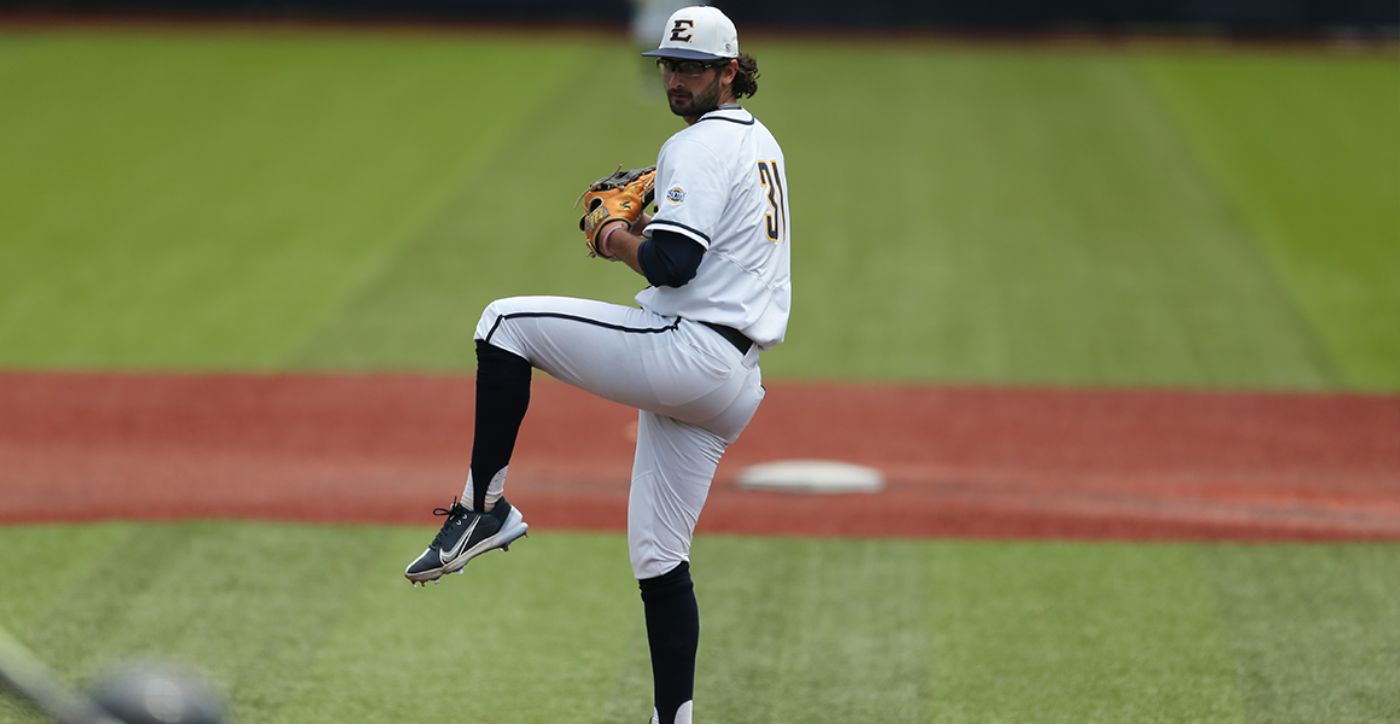 GREENSBORO, N.C. (May 13, 2022) – In a matchup with two potent offenses that can score lots of runs, it was one man on the mound that stole the show.

ETSU opened the weekend in Greensboro with a 5-2 win behind a quality-start win from Zach Kirby (Upland, Calif.), the second time this season that Kirby has hurled a quality start and received the win. The first came on March 11 in the first game of a doubleheader against Rider in which ETSU won 2-1, and Kirby would go on to win SoCon Pitcher of the Week.

Following a Cam Norgren (Cary, N.C.) walk and a Garett Wallace (Sanford, Fla.) double, David Beam (Knoxville, Tenn.) and Ryan McCarthy (Knoxville, Tenn.) would produce productive at-bats with two runners in scoring position to give the Bucs the early lead. Going into the game, ETSU was 19-8 when scoring first.

Kirby, going up against a team that ranked 20th in the nation in batting average, retired the first three batters on two groundouts and a strikeout before facing some trouble in the second. After putting the first two on with walks, Kirby would induce a fielder’s choice, grab his second strikeout, and get his third groundout to keep UNCG off the board.

The Spartans again threatened in the third with runners on first and third with two outs and the heart of their lineup up, but Kirby would enforce another strikeout to get out of the jam. UNCG left four runners on base in the first four innings and Kirby surrendered just one hit.

Doubling ETSU’s lead on one swing of the bat with two outs, Noah Webb (Kodak, Tenn.) belted his 3-1 pitch to left-center to bring in Bryce Hodge (Knoxville, Tenn.) and Tommy Barth (Brecksville, Ohio). Norgren would single right behind him and put runners on the corners with a new UNCG arm, but the Bucs wouldn’t increase their lead anymore.

The Spartans finally got to Kirby with a pair of singles with one out, but an aided error allowed UNCG to plate their first run of the game. With a runner on second and one out, Kirby would strike out the conference’s leader in batting average and get a line out to the hot corner to end the inning. The one run in the fifth is all that UNCG would muster as it only got two runners to third in all of Kirby’s seven innings.

The Bucs added insurance in the eighth off a Justin Hanvey (Purcellville, Va.) RBI single to score Wallace off his third hit of the afternoon. Nathanial Tate (Manchester, Tenn.) would close out the game with two innings of one-run ball and one strikeout, retiring the ninth in order.

The Bucs are yet to drop a series when winning the first game of the weekend.

The Bucs look to clinch the series tomorrow afternoon with a 2:00 p.m. first pitch at UNCG Baseball Stadium in Greensboro. The game will be streaming on ESPN+.