Baseball
Baseball
The Citadel at ETSU | May 21, 2022
BoxscorePlay-by-Play 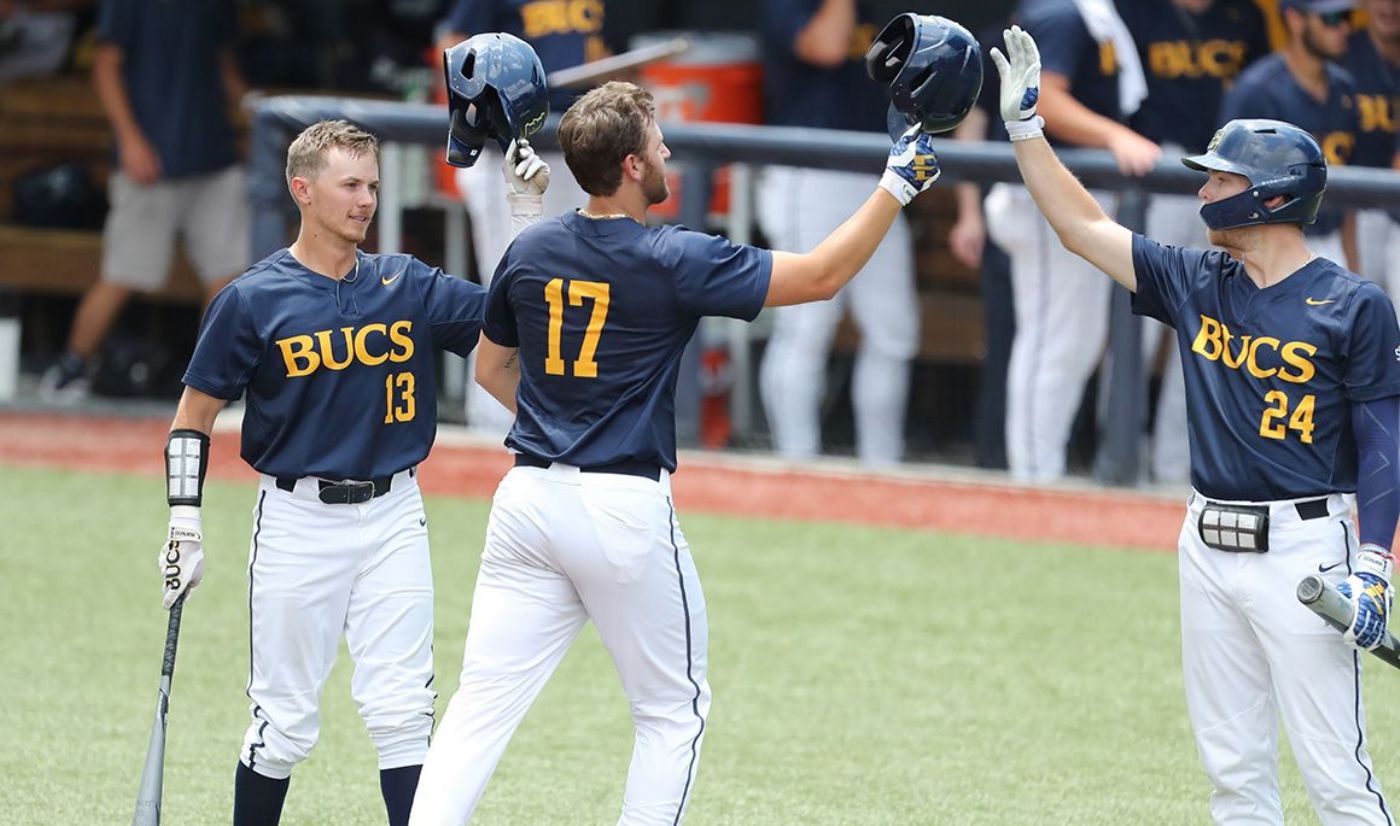 JOHNSON CITY, Tenn. (May 21, 2022) – ETSU Baseball ended the regular season on a high note with an 11-10 thriller at Thomas Stadium in a shortened eight-inning game following a 1-hour, 44-minute delay lightning delay. With the win, the Buccaneers finished 11-10 in league action and secured the No. 5 seed in the upcoming Southern Conference Championship on Wednesday in Greenville, S.C.

ETSU drew first blood in the bottom of the opening inning after Bryce Hodge (Knoxville, Tenn.) plated Tommy Barth (Brecksville, Ohio) with an RBI ground out to short.

The Citadel took the lead in the top of the second frame with three runs on one hit and one ETSU error, highlighted by Garrett Dill’s two-run homer. The Bucs cut into the two-run deficit in the bottom of the second inning when Cam Norgren (Cary, N.C.) blasted an 0-2 pitch over the center field wall for his ninth long ball of the season.

The Bulldogs extended their lead to three runs with a pair of solo home runs in the top of the third inning off the bats of Noah Mitchell and Travis Lott. That did not phase the Blue & Gold with ETSU coming out swinging in the bottom of the third frame. Noah Webb (Kodak, Tenn.) kicked off the six-run inning with an RBI single up the middle to bring home Ashton King (Knoxville, Tenn.). Two batters later with the bases loaded and nobody out, Garett Wallace (Sanford, Fla.) lifted a sacrifice fly to right field to bring home Hodge and pull ETSU within one run. In the next at bat, David Beam (Knoxville, Tenn.) tied the game with a ground-rule double to even the contest at 5-5. ETSU did not stop there, scoring three more runs in the inning, including a two-run double by Barth to provide the Bucs with an 8-5 advantage.

ETSU saw its lead jump to 9-5 in the bottom of the fourth inning when Norgren blasted his second homer of the game, a no-doubter over the right field wall. In the next inning, the two squads traded runs with The Citadel scoring on an RBI groundout and the Bucs receiving a run from Barth’s RBI single to keep The Citadel at arm’s length.

The Bulldogs would not go away though, scoring four runs in the next three innings. In the top of the sixth inning, Dylan Costa brought home Cole Simpson with a sacrifice fly. Two innings later in the eighth inning, The Citadel scored three runs on four hits and one wild error to tie the game at 10-10.

ETSU responded well in the bottom of the eighth inning, beginning with a leadoff double from Hodge. After Webb’s single put runners on the corners and nobody out, Norgren brought home the game-winning run with a ground-rule double in the gap for the 11-10 advantage. The Bucs ended the inning grounding out into a double play, but held on to the one-run lead.

Up Next
ETSU and The Citadel will square off again in the opening round of the SoCon Championship at 3 p.m. The Bucs will be seeded No. 5 in the bracket, while the Bulldogs will be No. 8.