Baseball
Baseball
The Citadel at ETSU | May 25, 2022
BoxscorePlay-by-Play 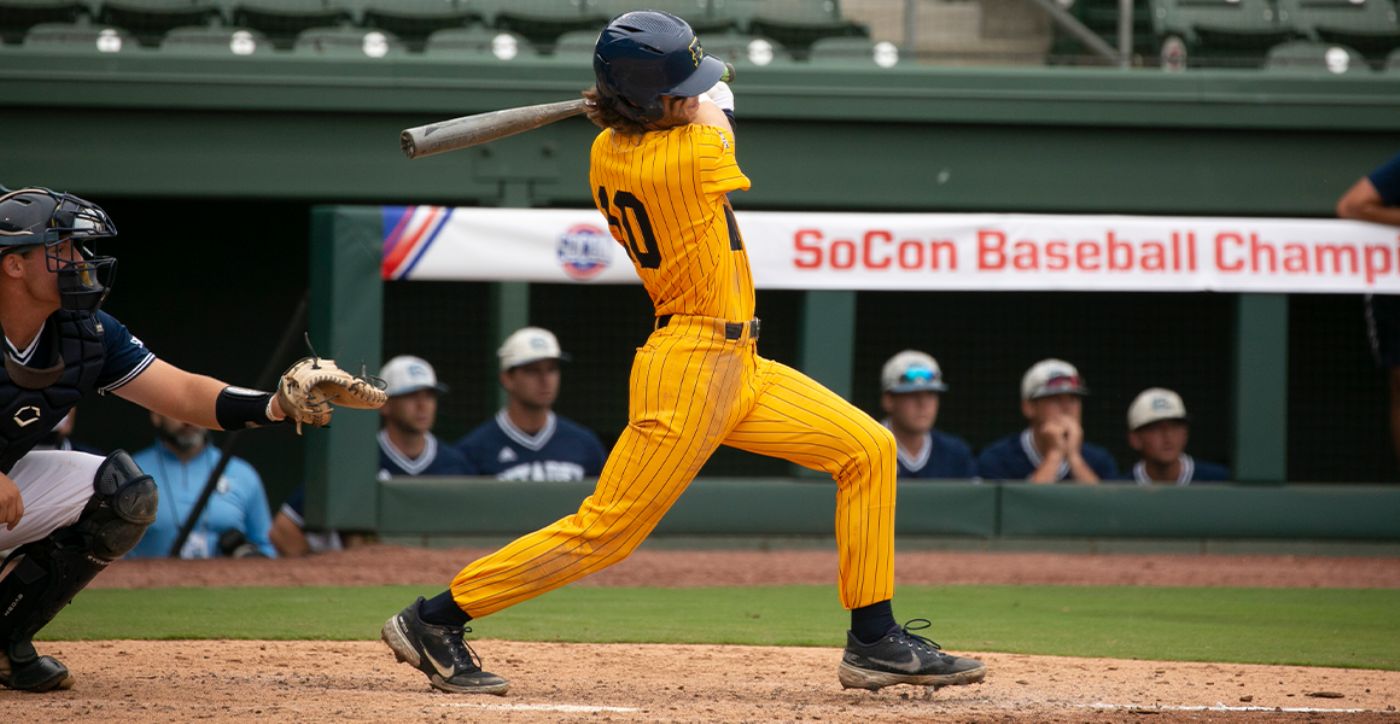 Bucs went 1-for-11 with runners in scoring position

GREENVILLE, S.C. (May 25, 2022) – Opportunities presented themselves for the Bucs to get on the board early and late but were unable to take advantage of those opportunities.

In the first-round matchup against The Citadel, the Bulldogs eliminated the Bucs 3-1 in the 2022 SoCon Tournament presented by Holston Gases. The Citadel’s Cameron Reeves, who was the winning pitcher in the first game of the three-game series at Thomas Stadium last weekend, hurled a complete game while allowing just one run.

The Bulldogs got to Zach Kirby (Upland, Calif.) early in the first inning, plating their only three runs in the game on three hits. Tommy Barth (Brecksville, Ohio) started the bottom half of the inning on second with a throwing error, but the Bucs wouldn’t get their run until the seventh inning.

Between the second and seventh inning, Kirby retired 17 of the next 22 batters to hurl six scoreless innings, including five of his six strikeouts. The Bucs were able to get runners into scoring position in the third, fourth, and sixth innings. David Beam (Knoxville, Tenn.) and Ryan McCarthy (Knoxville, Tenn.) doubled in back-to-back innings in the sixth and seventh, but McCarthy would come home on a sacrifice fly from Ashton King (Knoxville, Tenn.).

The ninth inning saw some excitement as Barth drew a four-pitch walk with two outs and King singled right behind him, but both runners were left on base. King, Barth, and Jared Paladino (Levittown, N.Y.) drew the three walks for the Bucs while Kirby and Matt Bollenbacher (Powder Springs, Ga.) surrendered just one walk.

All eight hits came from eight different starters as Beam and McCarthy were the only Bucs to record a double. King recorded the lone RBI of the game, his eighth in his last five games.

The Citadel’s Cole Simpson and Sawyer Reeves recorded the only multi-hit games as Simpson recorded two of the three doubles for the Bulldogs.

Barth ends his 2022 Freshman of the Year campaign with a team-high .369 average, becoming the first freshman since 2008 (Paul Hoilman) to bat over .350 in a season and lead the team in batting average.

Noah Webb (Kodak, Tenn.) ends his 30-game on-base streak after going 0-for-4. King’s 22 doubles on the season are officially tied for fifth-most in program history in a single season. King is the fourth Buccaneer since 2010 to lead the Bucs in doubles in back-to-back seasons.