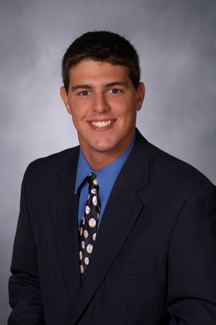 Russell started all 54 games for the Bucs playing first base ... Russell was named to the A-Sun All-Conference Second Team ... led the team in hitting, batting .335, driving in a career high 44 RBIs ... Russell’s 73 hits, 19 doubles, and 10 home runs were the most by any player on the Bucs squad ... lead the team with a .560 slugging percentage ... Russell hit .338 with runners in scoring position ... had 13 multi-RBI games and 19 games where he had multiple hits ... scored a career-high four runs against High Point on March 11 ... had a career-high two home runs against Campbell on March 31.

Russell played in 30 games last season, starting 22…played 18 games at third base, nine as a designated hitter and three as a pinch hitter…Russell had 2 hits and one RBI against Washington State...had one home run that drove in two runs against Siena...Anthony had a .337 batting average with 29 hits, seven doubles, one home run, 14 RBIs, and scored 11 runs for the season…he had a .453 slugging percentage and a .383 on-base percentage… appeared on the A-Sun All-Tournament team after hitting .667 with three doubles and four RBIs in four tournament games.

Russell is a power-hitting infielder from DeMatha Catholic High School in Hyattsville, Md. ... the Stags finished the 2004 season 22-4, winning their third consecutive Washington Catholic Athletic Conference title ... after winning its final 13 games, DeMatha finished the season ranked No. 1 in the Washington, D.C., metro area by The Washington Post and No. 22 in the nation by USA Today ... Anthony hit .370 with five home runs and 36 RBIs in his senior season ... as a junior, he hit .451 with 30 RBIs and 26 runs scored ... Russell was an honorable mention All-Met selection by The Washington Post after each of the last two seasons ... Russell played in the inaugural AFLAC All-American High School Baseball Classic last August in Fort Myers, Fla. ... the game featured the top rising seniors in the nation selected by baseball’s leading recruiting sources, Perfect Game and Baseball America ... eight first-round picks in the 2004 Major League Baseball First-Year Player Draft participated in the AFLAC Classic, including No. 1 overall pick Matt Bush.

Born on October 7, 1986 ... plans to major in business administration ... son of Dave and Monica Russell.