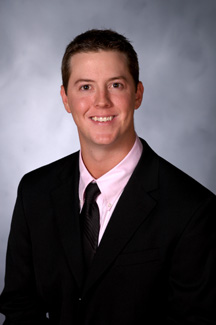 2005 Season: Jeremy was one of the top pitchers in the Southern Conference last season, leading the league in wins, going 10-4 in 18 starts ... Led the Bucs with 111.2 innings pitched and 91 strikeouts while pacing the starters with a 5.08 ERA ... He led the SoCon in games started while ranking fourth in strikeouts and innings pitched ... He tied for 28th in the nation in victories ... Hall was 6-3 in SoCon games, striking out 59 batters in 69.1 innings ... Jeremy allowed a .291 opponents batting average last season, and limited left-handed batters to a .265 average ... Was dominant in the middle of the season, winning six-straight starts from Mar. 27-Apr. 26 ... Had his best start of the season on Mar. 27 against UNC Greensboro, allowing no runs on three hits in 8.2 innings while striking out a career-high 11 batters ... He also struck out 11 in a win over Wofford on Apr. 15, allowing two runs on four hits and walking two ... Scattered nine hits over seven innings while allowing three earned runs and striking out nine in a win over Appalachian State on Apr. 22 ... Allowed two runs on nine hits in eight innings of work in a win over Western Carolina on Apr. 9 ... Went three innings, allowing just one hit to pick up the win over Virginia Tech on Apr. 26 in the Kingsport Classic ... Dominated UNC Asheville in his last start of the regular season, giving up one run on seven hits and striking out nine in eight innings of work ... Following the season, Hall earned second-team All-SoCon honors from the league’s coaches.  2004 Season: Emerged as the ace of the Buccaneer staff last season, starting 17 games and leading the team with nine wins ... Appeared in 19 games overall, going 9-8 with a 5.95 ERA ... Led the Bucs with 104.1 innings pitched and tied for the team lead with two complete games ... Hall allowed 144 hits and struck out 57 batters while walking 30 ... After losing his first two decisions last season, Hall won his next four decisions, posting a 2.03 ERA and striking out 21 batters and walking just two in 26.2 innings ... Had a similar streak late in the season where he won five of six decisions from early Apr. to mid-May ... Scattered 10 hits but allowed just one run while striking out seven in 5.2 innings to pick up his first win of the season on Feb. 28 against Central Michigan ... Was dominant in a complete-game victory on Mar. 12 against Georgia Southern, one of the best offensive teams in the Southern Conference ... Hall allowed one run on seven hits against the Eagles, striking out six while walking none ... His second complete-game victory of the season came against Appalachian State on Apr. 17 ... Hall allowed just one earned run on seven hits while striking out four and walking just one. 2003 Season: Pitched in 16 games, starting seven ... Posted an 0-5 record with a 5.85 ERA, fourth among Buccaneer pitchers ... Pitched 47.2 innings, allowing 58 hits and 31 earned runs while striking out 29 ... Started his first collegiate game on Feb. 22 against Binghamton ... Was dominant against Kentucky in his second start, but did not figure in the decision after allowing just three hits, no runs and striking out two in six innings of work ... Played for the Asheville Redbirds of the Southern Collegiate Baseball League last summer ... Earned league all-star honors after going 2-3 with a 1.54 ERA ... Threw two complete games and struck out 40 batters while allowing just 26 hits in 41 innings. High School: Hall lettered all four seasons as a pitcher and infielder for coach Jerry Jenkins at Daniel Boone High School … Also lettered three seasons in football for the Trailblazers … Hall was named to the Johnson City Press Super-22 Team following the 2000, 2001 and 2002 seasons … Was a Team One Midwest No. 1 prospect in 2001 … Batted .372 in 2002 with 12 home runs and 45 RBIs … Was 6-2 on the mound with a 1.27 ERA … Played for the Knoxville Thunder AAU team for three seasons. Personal: Born on Sept 16, 1983 … Is undecided on a major … Jeremy is the son of Roger and Sue Hall.