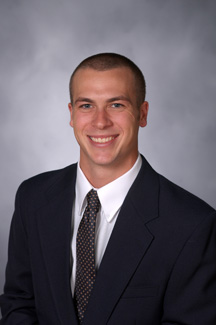 2008 Season: Was a fixture in the infield playing in 51 games, while starting in 48 at second and third base….Finished the year batting .303 with 11 doubles, four home runs, and 38 RBIs…Received the Atlantic Sun player of the week honor on May 3 after hitting a home run, two doubles and drove in seven ... Finished the season ranked the fifth toughest player in the nation to strike out.

2006 Season: Entered the starting lineup against Mercer on April 15 and started every game at third base for the remainder of the regular season... Hit .231 in 18 starts at third with four doubles and five RBIs... An exceptional fielder, Allen solidified the left side of the Bucs infield, committing just one error in 51 chances.

Personal: Born on August 25, 1986… majoring in business… son of Greg and Karen Allen.