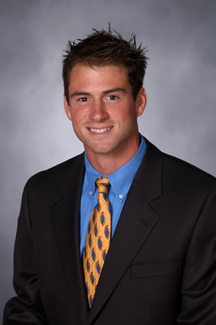 2005 Season: Shane was one of only two Buccaneers to play in all 53 games last season, and started all 53 in right field ... Following the season, Shane earned first team All-Southern Conference honors from the league’s media and second-team accolades from the SoCon coaches ... Byrne ranked fourth on the team with a .373 batting average last season and led the Bucs with 70 runs scored, 81 hits, five triples and 33 walks ... He is also ETSU’s returning leader in home runs slugging percentage and on-base percentage ... Shane ranked seventh in the nation in runs scored per game (1.34) while tying for first in the confernce in triples, third in slugging percentage, fourth in runs scored, sixth in home runs and seventh in total bases ... Byrne also had 15 doubles, 45 RBIs and 11 stolen bases last season ... Shane led the Bucs with a .403 average in SoCon games last season, and also hit six homers, drove in scored 37 runs and drove in 26 ... Hit .446 (25-for-56) against left-handed pitching and batted .600 (9-for-15) with a runner on third and less than two outs ... Also ranked second on the team with 26 multi-hit games and third with 14 multi-RBI games ... Had a season-high five hitts, going 5-for-6 with three runs scored and three RBIs in a win over Elon ... Scored a season-high four runs in a win over Furman on Mar. 12 ... Drove in a season-high four runs against The Citadel on May 8, all coming on a grand slam that capped a 10-run first inning.  2004 Season: Was one of three Buccaneers to play in and start all 58 games last season ... Started each game in right field ... Also pitched in one game, working an inning in the final game of the regular season against Furman ... Showed great improvement at the plate, finishing the season third on the Bucs with a .330 batting average ... He led the team with five triples and was third on the team with 51 runs scored, fourth with 39 RBIs and fifth with six home runs ... Ranked second on the squad with 13 stolen bases in 17 attempts ... Also hit 13 doubles and walked 26 times ... as third on the team with 24 multi-hit games and fifth on the Bucs with eight multi-RBI games ... Went 4-for-5 with three runs scored and two RBIs in a win over Central Michigan on Feb. 28 ... Had another strong game in ETSU’s win at Kentucky on Mar. 3, goung 4-for-6 with three RBIS and two runs scored ... Had a 10-game hitting streak and a nine-game streak last season ... Was 2-for-4 with three RBIs and two runs scored at Wofford on Apr. 9 and was 3-for-4 with two runs scored and an RBI against Virginia Tech on May 19. 2003 Season: Byrne played in 47 games, starting 46 ... Stepped in at third base early in the season, starting 45 games, and one in center field ... Finished fourth on the team with a .269 batting average, and was second on the team with 13 doubles ... Scored 26 runs, hit one home run and drove in 26 ... Drew 15 walks and was 6-of-7 in stolen base attempts ... Also made two appearances on the mound, not allowing any earned runs in 2.2 innings of work ... Hit a grand slam in his third collegiate game, on Feb. 22 against Binghamton ... Had four RBIs and three hits against Western Carolina on March 22 ... Scored a season-high three runs on three hits and two RBI against Davidson on April 27 ... Had an ETSU-high 16-game hitting streak from April 12-May 10 ... Registered multiple hits in nine games and multiple RBIs in eight ... Finished the season on a tear, hitting .310 in ETSU’s final 20 games ... Played for the Asheville Redbirds of the Southern Collegiate Baseball League last summer ... Named a league all-star after batting .320 with a home run, six RBIs, 17 walks and 20 runs scored ... Was also 2-0 with a 3.50 ERA and two saves, allowing just 12 hits and striking out 15 in 18 innings pitched. High School: Byrne lettered all four of his seasons for coach Bernie Young at Science Hill High School in Johnson City, Tenn. … Byrne also lettered in cross country and basketball at Science Hill … Byrne was dominating on the mound for the Hilltoppers, compiling a 21-2 career record with a 1.04 ERA … He also put up good numbers at the plate, batting .330 with nine home runs. Personal: Born on Sept. 14, 1983 … Is undecided on a major … Byrne comes from a very athletic family; his grandfather, Tommy Byrne, played for the New York Yankees … His father, Charles Byrne, played golf at ETSU, then professionally … His mother, Betsy Byrne, was inducted into the Cumberland College Hall of Fame following her basketball career.