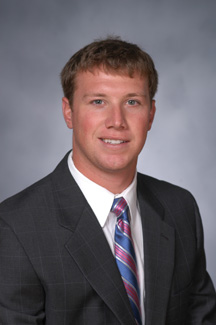 2005 Season: For thie third consecutive season, Calicutt was featured on the mound and in the field, pitching in 17 games and 18 games as an outfielder or designated hitter ... He started 14 games as a pitcher, 10 in left field, four in center field and two at DH ... On the hill, Calicutt was third on the team in wins, going 5-6 with a 7.39 ERA ... He was also second on the team with 84 innings pitched and third on the Bucs with 44 strikeouts ... He allowed just a .250 (18-for-72) batting average to left-handed hitters ... Went 2-0 to start the season, with wins over Niagara on Feb. 19 and Xavier on Feb. 27 ... He went six innings against Niagara, allowing two earned runs on just four hits while walking two and striking out four ... He tied his season-high in innings pitched against Xavier, going 7.1 innings and scattering sebven hits, allowing no earned runs, walking two and striking out two ... Steven also went 7.1 innings against College of Charleston on Apr. 30 ... Calicutt batted .174 with a homer, five RBIs, two doubles and four runs scored at the plate last season ... Had two multiple-RBI games, talling two RBIs on Mar. 9 against Samford and on Apr. 22 against Appalachian State, both ETSU victories.  2004 Season: Calicutt again performed double-duty for the Bucs, appearing in 20 games as a pitcher and 32 games in the field ... He started 16 games on the mound, 27 as a designated hitter and two as a center fielder ... As a weekend starter, Calicutt tied for second on the team in victories, going 5-9 and posting a 9.04 ERA ... He finished third on the Bucs with 85.2 innings pitched and fourth on the team with 49 strikeouts ... Had another successful season at the plate, ranking fifth on the team with a .302 batting average ... Also hit four home runs and drove in 20 runs while scoring another 12 ... Earned his first win of the season against Xavier on Feb. 21, tossing six innings and allowing a run on just three hits while striking out six ... Had another strong outing against Western Carolina on Apr. 4, picking up the win after allowing two runs on seven hits over seven innings ... Was dominant in a win over Appalachian State on Apr. 18, allowing a run on six hits in six innings ... Struck out a career-high nine batters in a win over Wofford on Apr. 11 ... Had a season-high four hits against Virginia Tech on May 19, going 4-for-5 with an RBI ... In an ETSU win over the Hokies on Apr. 27, Calicutt went 2-for-5 with a run scored and three RBIs ... Had six other multi-hit games on the season ... Also had four multiple-RBI games with a season-high three driven in on two occasions. 2003 Season: Calicutt was a versatile player for the Bucs, playing 26 games in the field and pitching in 17 ... Started 13 games on the mound, 13 in center field, five in left field, four at first base, two in right field and two at designated hitter ... Ranked second on the team with a .314 batting average ... Scored 20 runs, hit two doubles, belted two home runs and drove in 12 runs ... Drew 13 walks and was successful on 6-of-10 stolen base attempts ... Had multiple hits in 10 games, with a season-high three base hits three times ... Had three hits in consecutive games, on April 12-13 against College of Charleston ... Had a season-high three RBIs on April 13 against the Cougars ... Scored a season-high two runs on five occasions ... Homered in both ends of a doubleheader, Feb. 22 against Binghamton ... Was 3-6 with a 6.66 ERA as a pitcher ... Pitched 71.2 innings, allowing 53 earned runs on 80 hits, striking out 46 ... Earned a win in his first collegiate appearance against Xavier, going 5.1 innings, and allowing just one hit, one earned run and fanning six ... He was also dominant in his first Southern Conference start, pitching a complete-game shutout against VMI ... He allowed just two hits and struck out four. High School: Calicutt lettered in all four of his seasons as a pitcher and outfielder for coach Ben Waddle at Dorman High School in Spartanburg, S.C. … Calicutt also lettered in football and basketball while at Dorman … Calicutt was named all-region in 2000 and 2002, and team MVP in 2002 … Dorman was region champion in 2001 and 2002 and Upper South Carolina champion in 2001 … Dorman’s 2002 team was ranked as high as 12

th in the nation … Calicutt was the third-ranked pitcher in the state of South Carolina last season … He finished his high school career with a .401 career batting average and a 2.30 career ERA. Personal: Born on Feb. 7, 1984 … Plans to major in communication … Steven is the son of Steve and Rosemary Calicutt.