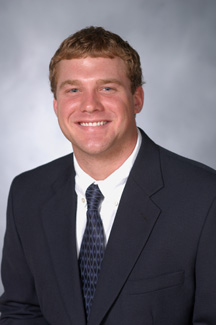 Campbell appeared in three games last season… struck out two batters in one inning of work against St. John’s… struck out one in 2/3 of an inning against UNC Asheville.

Campbell made nine appearances on the mound last season with three starts ... he went 2-0 last season with a 4.56 ERA, allowing 27 hits in 23.2 innings pitched, striking out 14 opposing batters ... earned his first collegiate win against Radford on Apr. 27, working five innings and allowing three runs on five hits while striking out four ... picked up his second win against High Point on May 21, allowing two runs on just three hits in six innings and striking out a season-high six batters.

DeMatha was one of the top baseball programs in the country over the past two seasons, finishing 15th in the final USA Today rankings in 2003 and earning a No. 20 ranking by the publication following the 2004 season ... Campbell was the ace of the Stags’ rotation, as the team won the Washington Catholic Athletic Conference in 2002, 2003 and 2004 ... DeMatha finished the 2003 and 2004 seasons ranked No. 1 in the Washington, D.C., metro area by The Washington Post ... Campbell was named all-county and All-Met three times and was first-team all-conference and all-state twice ... In his four seasons at DeMatha, Campbell went 24-5 with a 1.66 ERA and 222 strikeouts ... he was 7-2 during his senior campaign ... As a junior, Campbell was 8-1 with a 1.43 ERA, striking out 56 batters in 59 innings ... he allowed just 30 hits and 12 earned runs on the season ... he was named first-team all-conference and first-team All-Metropolitan by The Washington Post ... was also dazzling during his first two seasons, going 6-1 with a 2.30 ERA as a sophomore and 3-1 with a 1.50 ERA as a freshman ... he struck out 104 batters in 83 innings over those two seasons, allowing just 54 hits and 23 earned runs ... played for Silver Spring-Takoma of the Clark Criffith Collegiate League this past summer, going 2-0 with a 1.00 ERA in three appearances ... he pitched nine innings, allowing just three hits and striking out 12.