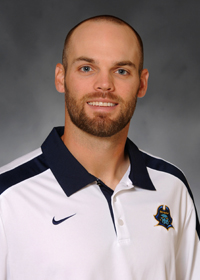 Matt Landreth enters his third year as the volunteer assistant at ETSU. Landreth works with the outfielders, and also assists with hitting, base running, and on-campus recruiting. On gamedays, Landreth serves as the first base coach.

In 2012, senior outfielder Matthew Scruggs was received Second Team ABCA/Rawlings All-South Region and Second Team All-Atlantic Sun honors. Scruggs also led the A-Sun and was second in the NCAA with 20 home runs, while totaling 129 total bases. Meanwhile, sophomore Clinton Freeman led the A-Sun in hits (81), and was fourth in batting average (.360) and RBIs (50).

In 2011, the ETSU offense led the nation with 86 home runs in 57 games played. Landreth coached two-time All-American Paul Hoilman and First Team All-American Bo Reeder – which were the fifth and sixth All-Americans in ETSU program history. Landreth saw Hoilman, Reeder, and Derek Trent taken in the MLB draft that year as well.

Prior to his time at ETSU, Landreth spent the 2010 season at Division II Lander University in Greenwood, S.C. where he finished his Bachelor’s Degree. While at Lander, he worked with the outfielders, catchers, and hitters, while also being was responsible for the strength and conditioning programs for the Lander University baseball team. In 2010, the Bearcats rose to as high as No. 17 in the Division II rankings.  The Lander offense broke school records for runs scored (367), RBIs (315), and on-base percentage (.401), as well as tying the single-season home run record with 28.

No stranger to the Atlantic Sun Conference, Landreth played collegiately at Gardner-Webb University from 2003-2004, before succumbing to health issues which ended his career. Landreth was part of a team that finished 33-23 in 2003, including an 18-15 mark in league play. In the process, the Bulldogs qualified for the A-Sun Tournament. In 2004, the Bulldogs posted a 19-11 mark in the A-Sun, which placed Gardner-Webb only a game out of a tie for second place.

Landreth attended North Buncombe High School in Weaverville, N.C., where he earned seven varsity letters in baseball and football. During his senior year in 2001, Landreth was voted to the All-WNC team in football.

Landreth received his degree in Exercise Science from Lander University in 2010 and a Master’s Degree in Sport Management from ETSU in 2012. Landreth is also certified as a strength and conditioning specialist through the NSCA.

Landreth is married to the former Carla Bowlin, who ran track and cross country at Appalachian State University from 2003-2006. The couple resides in Johnson City.