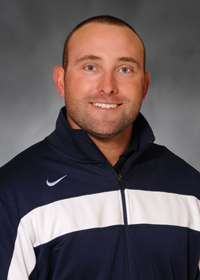 Xan Barksdale enters his fourth season as assistant coach of the ETSU baseball program. Barksdale works with the catchers, hitters and will have other administrative responsibilities.

Barksdale joined the Buccaneer program after spending five seasons as an assistant coach at the University of Louisville. While at Louisville, Barksdale worked with the Cardinal catchers and assisted with the hitters as well as performing other administrative duties. He arrived at Louisville after playing three seasons in the Atlanta Braves system.

In 2013, Barksdale saw ETSU win its first Atlantic Sun Conference Championship, while making the Bucs' first trip to the NCAA Tournament since 1981. The Bucs won 36 games in 2013, which were the third-most victories in program history, while ETSU's 17 conference wins were the most since joining the A-Sun in 2006.

In 2011, Barksdale had a significant impact on freshman catcher Jeff Gardner, who finished second on the squad with a .333 batting average, while also adding three home runs and 13 RBIs. In addition, catcher J.J. Ethel finished 2011 by throwing out 16 baserunners, while being drafted by the Los Angeles Dodgers following the season.

During the 2010 season, Louisville catcher Jeff Arnold earned Second Team All-BIG EAST recognition after hitting .306 with three home runs and 32 RBI. Following the season, Arnold was selected in the 26th Round of the 2010 MLB First-Year Player Draft by the San Francisco Giants.

In 2009, Arnold earned All-BIG EAST Tournament honors and was a Preseason All-BIG EAST selection for 2010. Under the guidance of Barksdale, Louisville catchers had a stretch of 77 consecutive games from 2007 to 2009 without committing an error behind the plate.

Barksdale signed a free agent contract with the Braves in July of 2004 and competed for the Braves minor league affiliates in the Gulf Coast (GCL Braves), South Atlantic (Rome) and Carolina Leagues (Myrtle Beach). He played the final two seasons with former Cardinal Mark Jurich.

Prior to his pro career, he played for two seasons at Ole Miss while current Cardinal head coach Dan McDonnell was an assistant. He was named most dedicated in 2004 and completed his bachelor's degree in marketing with a minor in math.

Following high school, Barksdale attended Holmes Community College for two seasons - the same JUCO that Roy Oswalt attended. While at Holmes, he earned an associate's degree in engineering, was a member of the Phi Theta Kappa honorary fraternity away from the field and was a two-time All-State selection and All-Region honoree in 2002 on the field.

He was All-State and All-Conference and was selected to play in an All-Star Game following his senior season at Madison Ridgeland Academy in Madison, Miss. Barksdale was born on December 7, 1981, in Memphis, Tenn.

Along with his duties with U of L, Barksdale also developed the product called Catcher's Thumb (www.CatchersThumb.com) and has a catching website (www.catching-101.com) that is devoted to helping catchers all over the country improve their skills with videos, articles, drills, etc.