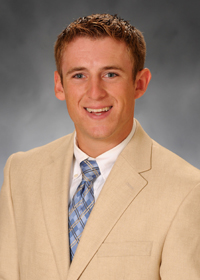 2012 Season
Received A-Sun All-Academic Team honors … played in 41 games and made 24 starts (third, second, and designated hitter) … tallied five multi-hit games along with a five-game hitting streak from 5/11-17 … hit his first career home run and drove in a career-high four runs against USC Upstate on 4/15 at Thomas Stadium … recorded back-to-back two-hit games vs. Stetson (5/13) and at Georgia (5/15) … went 2-for-4 with an RBI and two runs scored against Saint Joseph’s on 2/24 … belted five hits in his first four games to start the season.

2011 Season
Saw action in 20 games including two starts...Hit .385 with a double on the season...Had a season-high two hits, including a double in a victory against UNC Asheville (3/2).

Prior to ETSU
A four year letterwinner from Daniel Boone High School where he was named to the Johnson City Press Super 22 ... was also a TCBA All-Region selection, a Tricitiessports.com All-Conference Team selection, and a first-team all-conference selection ... Reynolds finished the 2009 season with a .415 average, driving in 31 runs with nine home runs as a second baseman.