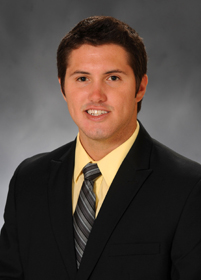 2012 Season
Earned Dean’s List and A-Sun All-Academic honors … played in 37 games, making 36 starts (second base) … ranked second on the team in hit-by-pitches (6) and was fifth in batting average (.280) … finished with nine multi-hit games and reached base safely in 10 straight games from 3/18-4/5 … went 3-for-5 with a home run against Eastern Kentucky on Feb. 18 … finished with another 3-hit performance two games later versus Saint Joseph’s on Feb. 24 … hit .367 with two home runs and six RBIs in his first nine games of the season from 2/17-3/4 … drove in three runs with a pair of hits against Furman on 3/13.

Prior to ETSU
A four year letterwinner from American Heritage School where he was a First-Team All-State and First-Team All-County selection for head coach Carm Mazza ... named the team offensive MVP after he hit .422 his junior season with 12 doubles, two home runs, drove in 25 and swiped 16 bags ... played for the prestigious Diamond Vision Elite team that won the 2008 17U BCS National Championship and the 18U WBF National Championship and were the runners-up at the 2008 World Wood Bat Tournament.