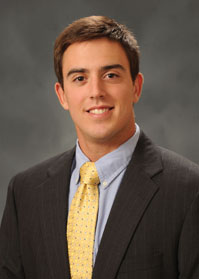 2013 Season
Named to Atlantic Sun All-Academic Team and A-Sun Conference Scholar… made 26 relief appearances, going 4-2 with a 2.56 ERA (11 ER/38.2 IP) and one save … 19 of his 26 appearances were scoreless … tossed 4.1 scoreless innings with six strikeouts at Illinois-Chicago on May 4, marking career highs for both IP and Ks … earned his first collegiate save after tossing the final three innings of shutout ball versus Lipscomb on April 13 … didn’t allow a hit in 11 outings for the Blue and Gold.