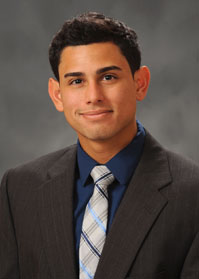 2013 Season
Played in 58 games, making 57 starts all at shortstop … broke the ETSU single-season record with 15 sacrifice hits … hit safely in 10 straight games from Feb. 19-March 13 … had a walk-off home run in the 9-8 win vs. Seton Hall on Feb. 23, while also belting a home run in the 4-3 victory against the Pirates the day after – marking his first collegiate round trippers … went 2-for-3 with a home run, two runs scored and two RBI … was a perfect 3-for-3 against Kennesaw State on April 27 … registered two doubles in both games against Radford.

2012 Season
Played in 47 games, making 37 starts (shortstop and third) … totaled 10 multi-hit games and collected a six-game hitting streak from 4/15-24 … generated his first collegiate hit vs. Indiana on March 4 … had a season-best 3-hit game with a double, RBI, and two runs scored against Mercer (4/21) … went 6-for-13 with a double, RBI, and four runs scored in the series against Mercer … reached base safely in all three games at Arizona, while going 2-for-4 with a double and RBI on 4/29 against the Wildcats … registered three consecutive 2-hit games from 5/6-11 … committed only six errors in 111 chances.

Prior to ETSU
Was named Third-Team All-Dade Country following his senior season…Excelled for the Spartans as he averaged .380 at the plate in his first three seasons with 10 home runs...A Second Team All-County selection in 2010, Riopedre helped guide Archbishop McCarthy High School to its first-ever Florida State Tournament appearance...Riopedre was invited to take part in both the MLB summer workouts and the Chicago White Sox Showcase, and also played for the prestigious Team Marruci…Was named to Perfect Game Florida Honorable Mention All-High School Team.