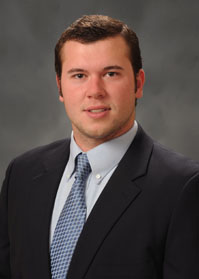 2012 Season
Received A-Sun All-Academic honors … made nine appearances, five starts before missing the remainder of the season with an arm injury … was 2-2 with a 3.94 ERA (14 ER/32.0 IP) but was shut down for the year on March 31 … earned his first win of the season after allowing two runs on five hits in five innings against Saint Joseph’s on Feb. 25, before picking up another winning decision with a dominate effort at Florida Gulf Coast on March 24 … tossed seven shutout innings, while striking out nine Eagle hitters in Gulf Coast … struck out seven Belmont batters on March 16 in Johnson City.

2011 Season
A workhorse for the Bucs during the 2011 season...Was named Second-Team All-Atlantic Sun...Appeared in 17 games while earning the start on the mound in 14...Finished the season with a 6-5 record in 85.1 innings of work...Posted a 3.69 ERA with a team leading 66 strikeouts...Held opposing hitters to a .235 batting average...Threw a complete game shutout against N.C. State (5/7), while giving up only two hits and striking out six...Was named Atlantic Sun Pitcher of the Week after the stellar performance against N.C. State, while also earning Southeast Pitcher of the Week from College Baseball Insider