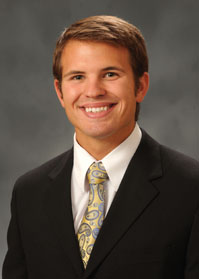 2013 Season
Atlantic Sun All-Academic member … made 19 appearances out of the bullpen in his first season with the Bucs … registered 10 scoreless appearances, while going 1-2 with a 3.82 ERA (13 ER/30.2 IP) in those outings … earned his first win as a Buccaneer on April 30 at Appalachian State … tossed a season-high four innings versus USC Upstate (May 25) in the A-Sun Tournament … allowed one run on two hits and tied a season-best with three strikeouts against the Spartans … also posted three strikeouts in three scoreless innings at The Citadel (April 17) … helped combine for one shutout by pitching two innings of one-hit ball vs. Tennessee Tech (April 2).

Prior to ETSU
Comes to ETSU from Cleveland State Community College, where he played for head coach Mike Policastro … led the team with a 5-1 record, while earning a 3.64 ERA in 59.1 innings pitched in 2011 at Cleveland State … multi-sport athlete (baseball, football, basketball) at Halls High School in Knoxville, where he led the Red Devils to three regular season and district championships … during his final season at Halls, Burton hit .495 with seven home runs, 16 doubles, three triples and 65 RBIs, while earning a 6-1 record and a 2.95 ERA on the mound … in 2009-10, Burton was named to the Tennessee Baseball Report (TBR) All-Two Way Team and earned All-District honors … was also named to the Tennessee Baseball Coaches Association (TBCA) All-Region Team and was a TBR Super Sophomore.