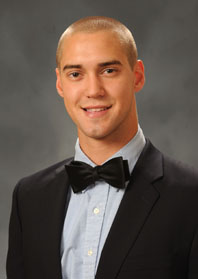 2013 Season
Atlantic Sun All-Academic member … made 10 appearances (three starts) for ETSU in his rookie season … made first collegiate start on March 13 at UNC Asheville … tossed a season high four innings in a start against Appalachian State on April 24 … struck out four hitters in the start versus the Mountaineers.

Prior to ETSU
A four-year letterwinner under head coach Tim Gillis at Crestview High School … was named the Daily News All-Area Player of the Year a junior, while leading his squad to the district title in 2011 … as a junior, Miller hit .368 with three homeruns, 33 RBIs and 18 runs scored … on the mound, he struck out 56 in 61 innings pitched, while compiling a 6-2 record and a 2.18 ERA … as a sophomore, Miller was named First-Team All-Area and was All-Area Honorable Mention as a freshman ... Miller was also named a 2011 Underclass Honorable Mention by Perfect Game … in his first three seasons with the Bulldogs, Miller has compiled a .350 average, seven home runs, 24 doubles, two triples and 83 RBIs in his career …  Miller was also been a force on the mound as he has earned a 10-3 record with a 2.20 ERA and 80 strikeouts.